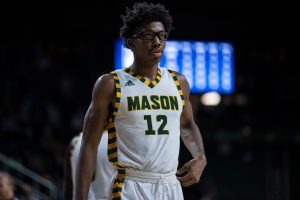 During Mason’s triumphant victory over VCU on Feb. 12, men’s basketball forward AJ Wilson seized his place in the team’s history by breaking a record that stood for 20 years.

With just over 10 minutes remaining in the second half, Mason had a four-point advantage in the Siegel Center. After a made three-point attempt by Wilson, the Rams inbounded the ball and quickly passed it over the half-court line. It created a three-on-two fast break for VCU, leaving only Wilson and junior Greg Calixte to defend the basket.

VCU got the ball into the hands of their freshman guard KeShawn Curry, who bolted down the left side of the court and leaped toward the basket. Wilson met Curry at the rim and swatted it out of his hands and off of the backboard, neutralizing the possession almost as quickly as it started.

That block gave Wilson his third of the game and his 78th of the season. By surpassing George Evans’ mark of 77 blocks, which Evans attained during the 1998-99 season, Wilson stands alone in first place on Mason’s all-time single-season blocks leaderboard.

Not only did Wilson celebrate a win that night, but he also received notice of his accomplishment.

“I checked my phone, and I saw that Mason [@MasonMBB] tweeted that I had broken the record,” Wilson said. “When I found that out, I was just shocked. That record hasn’t been broken for over 20 years. Everybody that knows George Evans knows that he was a really phenomenal player. So for me to be in the record books, that’s very humbling.”

Ever since Evans set the mark for blocks in a season, there has not been much competition. The most recent challenge of his record came from Mike Morrison, who now sits in third place from when he collected 64 blocks during the 2011-12 season.

Wilson, now with over 84 blocks on the year, knew growing up that he wanted to be a shot blocker on the basketball court. And who better to draw inspiration from than the man whose signature play is called “The Block?”

“When I was little, I used to watch LeBron [James] play a lot,” Wilson said. “Watching him chase down blocks, I wanted to put that in my game. And I feel like as I grew, and I grew into my body and became more athletic, that’s naturally become a part of my game.” 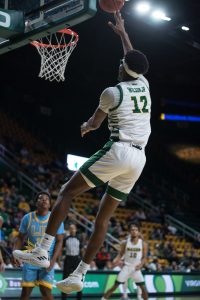 Wilson, who is from Laurel, Md., attended DuVal High School and spent time at Elev8 Prep Academy in Florida to enhance his basketball skills. He eventually caught the eye of Mason assistant coach Duane Simpkins, who successfully recruited him to Fairfax.

“He had a knack for blocking shots,” Simpkins said of Wilson. “That was evident really early on. That stood out to me when I recruited him, and even in practice when he was sitting out his first year with redshirting. He would make some plays defensively [and make you think] ‘Wow, that’s pretty impressive.’”

Throughout his time at Mason, Wilson has gotten progressively better at blocking. Wilson recorded 34 blocks in his freshman season, 38 blocks in his sophomore year, and is over 84 and counting this season.

In terms of blocks per game, Wilson has increased his mark from 1.1 in his freshman season to over 3.0 as a junior.

But to put Wilson’s blocking prowess into a solid context, there might not be a better metric than block percentage. Basketball-Reference.com defines block percentage as “an estimate of the percentage of opponent two-point field goal attempts blocked by the player while he was on the floor.”

Wilson’s block percentage this year is just under 13 percent, which slots him inside the top 10 out of all of the players in division one basketball for the 2019-20 season.

Of this achievement, Wilson said, “It’s definitely great knowing that, but I’m definitely not stopping at 10. I definitely want to crack the top five and possibly be in the top three.”

In his career, Wilson has had over 150 blocks and is climbing Mason’s career blocks leaderboard. Wilson currently sits in fourth place, in front of Erik Copes (122) but behind Andre Gaddy and Morrison, who each had 174 rejections.

Even aside from the blocks, Wilson is having his best season so far as a Patriot. As a regular starter for the team, he is playing about 28 minutes per game and averaging approximately 12 points and eight rebounds per game. He is also showing increases in his free throw percentage as well as an increase in made three-point shots.

Despite all of the accolades he has collected and the ones he is approaching, Wilson isn’t letting it affect his game or his goals when he steps out on the court.

“It’s kind of like scoring. Just treat every point the same, treat every block the same. I just like being able to help my team other than scoring. Blocking shots, guarding whoever I need to guard to help the team win, [those are things] I like to do,” he said.

With one more year of eligibility, Wilson is within striking distance of Evans’ career record of 211 blocks in a Mason uniform. What does he need to do to break that record?

Coach Simpkins said that Wilson needs to control the things he can control, such as meeting with Rebekah Schmidt, the athletic trainer, and continue to work in the weight room to strengthen different parts of his body.

Regarding the blocked shots part of the equation, Coach Simpkins said, “That’s just a God-given gift that he has. His timing, his ability to jump in the air, chasing a ball down, not many people have that ability. And he’s got it.”