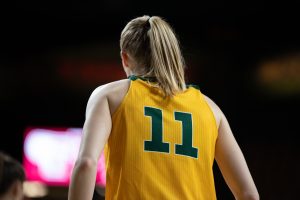 Every morning in high school, Jacy Bolton would wake up and see a photo tacked to her bulletin board of the person she aspired to be. A person that did the extraordinary: University of Missouri women’s basketball alumna Morgan Eye.

“I don’t even know if she knows the role that she played in my life,” Bolton said. “Just having come, especially as a female athlete, from a small town exactly like me and seeing her photo pinned up on my bulletin board every morning, it was just kind of a thought that like I could do that. That’s why I wanted to come to a D-I school, so that I could inspire other girls the way that Morgan inspired me.”

“So I am a little familiar with the Bolton family, but had no idea that she looked up to me that way so that’s very, very cool,” Eye said. “But coming from a small town, just like Jacy, it was my dream to play Division I basketball. Never in a million years did I think that I would get to do that and represent my home state.” 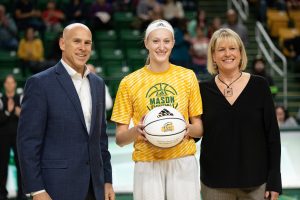 When looking at potential schools, Bolton was offered only one D-I scholarship. “Mason was only the Division I school that offered me. And when I first put it into my Google Maps and Missouri was 18 hours away by driving, I was like, ‘Um, no.’ But I really just kind of look[ed] at it as like, five hours, because it’s like an hour to the airport and then a two hour flight, but that’s the way I look at it. But I wasn’t really looking anywhere. I was just trying to see who was looking at me and where I fit.”

Head coach Nyla Milleson relived one of her first memories with Bolton fondly. “I’m not sure if her mom and dad even knew she was going to commit to us, but we were in my office. She came on her visit and she sat on the couch and started to cry and said she was coming here.”

However, coming from such a small town to playing in the suburbs of Washington, D.C. did not come without its worries. “I was definitely nervous about my teammates. Before Mason, I had always known at least one person on the team that I was going to. But, I was also nervous about trying to balance school and traveling and missing days and being the typical stereotype of a basketball player in the classroom. I didn’t want to be that,” Bolton said.

Milleson also remembered one of Bolton’s first practices. “When she was a freshman, we were down in Linn Gym and she was just really really homesick. So I took her into the laundry room down there and she was crying and crying, but I hugged her and told her everything was going to be OK. But you know this one really sticks out to me because it would have been easy for a little kid from a small town in Missouri to go back home, but she knew this is where she wanted to be.”

She is the only player ever in Mason women’s basketball history to be in the top 20 in points and top 10 in three-pointers and blocks. 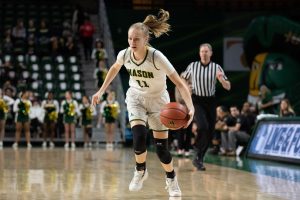 Bolton not only has made an impact on the Mason record book, but her team as well.

“Jacy has been a captain for three years,” Milleson said. “The impact she’s made on the floor coming in and working every day — I’m not sure you can really put it into words, but I know her impact is going to be felt for a long time.”

“My expectations coming into Mason were just to work hard,” Bolton said. “I never set any goals for myself because I wanted a blank slate, nobody knew me here and I wanted to make my own name. Scoring that 1000th point helped me to reflect on the whole journey that I’ve been on, like, ‘Wow, I really did that.’ Being able to do that in front of my family and my two best friends — that feeling made all the workouts, all those early mornings, everything worth it.”

Milleson also felt incredibly proud of the senior. “You know she’s just such a wonderful person, and she was when we recruited her, and that was one of the things that really attracted us to her. But watching her grow on and off the floor — I wasn’t sure what she could get done on the floor [when we recruited her], but scoring 1,000 points, who would have known? And the all preseason, all conference and all those other things. She’s just so special.”

Bolton has come a long way since her time in Missouri, but she has learned to cherish everything.

“I take more time to just sit there and reflect on the experience that I’ve had,” she said. “My dad always used to tell me before a game just to sit there and look around and be thankful.

In my senior year, I tried to do that more, you know like, [before games when I] stretch on the floor and look at the stands and see who’s coming in, and just know that people are going to be watching me, and I want to do the best that I can for them.”

She continued, “I also keep a game journal. Every game since my freshman year of high school I’ve written a little snippet about what happened in the game, and so I feel like I wish I would have wrote more, you know, maybe what I was feeling and what I could have improved on, but I just want to keep taking those memories in. And like taking more pictures or videos on the bus or writing down more things. I just want to remember it all so I can tell my kids one day.”

Bolton’s has some favorite moments from her career, but her favorite was a feeling she had when she came to Mason for the first time.

“The pride that I saw in my brother’s face,” she said. “He’s been my role model too, ever since I was younger, all the little plays we used to create in the driveway. I think of him coming to one of my first games and like even dropping me off on the campus for the first time and seeing all the gear that we got — just seeing how proud he was of me made it worth it.” 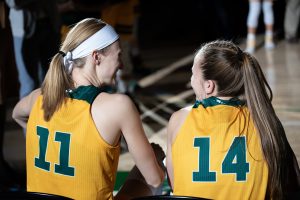 She continued, “The hometown visit was definitely up there too. Getting to have Thanksgiving with all the people that I love, showing off my little town made my heart really happy. And [going to] Italy was really just like icing on top. Not just playing there, but also the experience of it all. And I would say, basketball has been fun, but the memories created outside of it have really been what I loved the most.”

One of Bolton’s best friends, junior Nicole Cardaño-Hillary, said that she could not pick just one memory with the senior guard.

“I wouldn’t know where to begin,” Cardaño-Hillary said. “We have so many different moments that I cherish and will cherish forever. But having fun out on the court and getting excited for one another are some of my favorite times with her.”

Women’s basketball currently stands at 9-18 on the season, but that does not hamper Bolton’s feeling on her senior season.

“Even though this year has been difficult, it’s been the best collectively that we’ve been, whether it’s coming together tighter than ever, and continuing to work hard because we know that’s what we have to do,” Bolton said. “Everything is more bittersweet than normal because I’m going to these gyms for the final time and those final bus rides or final plane rides and final pregame locker room dances — everything that makes this experience what it is and I’m just trying to just do more and take more in so I have these memories forever. It’s definitely bittersweet because I’m enjoying it so much, I’m enjoying being with my teammates so much that I just don’t want that part to end.”

As Bolton’s final season comes to a close, her story still resonates loudly.

History does not always repeat, but it often rhymes.

A young girl went from watching a woman on TV make it from a small town in Missouri to a D-I school and leaving an incredible impact on her program to doing it herself. Who knows? Maybe a little girl has a picture of Bolton pinned to their bulletin board, thinking about how she can defy the odds and be just like her.

“Parasite” and the One Inch Jump