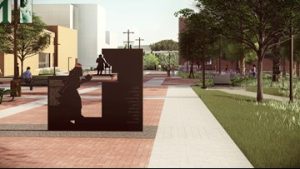 The Association of American Colleges & Universities (AAC&U) announced on Jan. 16 that Mason will host a Truth, Racial Healing and Transformation (TRHT) Campus Center. There is no set date for the center to open.

Mason joins 23 other colleges and universities around the U.S. to be hosting a TRHT center and is the first in Virginia to do so.

This new campus center would be dedicated to creating awareness about the effects of racism, as well as preparing future generations of college students to become leaders in order to educate and make others aware of promoting racial and social justice, according to an article from The George.

The center will allow Mason students to involve the community in allowing participants to immerse themselves in the commonalities of a shared human journey, while acknowledging the consequences of exposure to racism and honoring diverse cultures and experiences.

Freshman Arianna Acosta, a  member of the Hispanic Student Association, reacted to the news.

“I believe that this is a great opportunity for students, staff and the overall community to come together to understand the negative impact that racism had and continues to have on our society,” Acosta said.

Acosta stressed that education is critical to changing the country.

“Racism will continue to divide our country unless we educate ourselves and start leading the change that our country so desperately needs,” she explained.

According to The George article, Mason was selected based on its vision for the center, its demonstrated commitment of campus leaders and the community to the goals of a TRHT center, and its ability to prove that the community needed this center — meaning that people of color need a place to gather on campus.

Freshman Cindy Sanchez Canales, a member of the UNICEF organization on campus, said that having a space for students of color to collectively gather is a positive thing.

“I think it is a positive plan,” Sanchez Canales said. “UNICEF’s goal is to always help those in need or those that don’t have basic needs, but also to give them the opportunity to live, and not just survive.”

Sanchez Canales also explained what it meant to her as a member of UNICEF to have a center like this opening up on campus.

“In terms of me being at UNICEF, I think this is a perfect display of allowing people to have a comfortable or inclusive space that can provide an outlet or comfort and that’s living — not just surviving,” she said.

Mason is planning to erect a brand new memorial honoring more than 100 people enslaved by George Mason, according to The Washington Post. It will focus on a 10-year old girl named Penny and a man named James, Mason’s manservant. The memorial is scheduled to be finished in 2021.