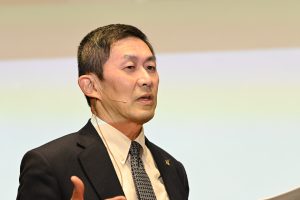 Mason Provost and Executive Vice President David Wu was named the eighth president of Baruch College on Feb. 3 by the City University of New York (CUNY), a public university system offering opportunities to faculty across 26 college campuses. He will be the first Asian American to lead Baruch College.

According to Wu, the way that he got selected for this position was through a national search that all colleges use when going through the presidential selection process. Typically, a national firm organizes this search and contacts individuals whose eligibility matches the criteria of a leadership position set forth by a college.

“The Chronicle of Higher Education, which was the search firm in charge of the presidential selection process for Baruch College, contacted me and asked me to submit my application after going through a national search,” Wu said. “They whittled down a couple hundred people to two finalists and eventually they selected me.”

As the provost of Mason, Wu supervised an annual budget of $1.3 million, organized awards for scholarship and research and worked toward increasing student participation across all majors.

One big project he took part in was Mason’s Access to Education initiative, which supports the educational motivations of students from all backgrounds.

“Diversity is very important to me because I am an immigrant myself,” Wu said. “I was born and raised in Taiwan, so providing academic opportunities for all students is something I care about deeply.”

Another big project Wu worked on was helping Mason become a Carnegie tier-one research university. The Carnegie Foundation classifies universities in the country that offer doctorate degrees. These universities are grouped into three categories based on the quality of research programs they offer, with tier-one research being the highest category that a university can be placed in.

“It is a great honor, because these are all the top universities in the country that belong to that group and Mason is the youngest institution in that group,” Wu said. “That is the result of a lot of people bringing Mason to that group so I am very honored to be part of that effort.”

Wu feels that going from a provost to the president of Baruch University is the natural step to take.

Junior communication major Katie Imel gave her opinion on Wu leaving Mason saying, “I’m still not entirely sure I know 100 percent about him and his relationship with the school but I’m happy he’s got a promotion with being president at another college.”

Imel continued, “I honestly do wish him luck. He’s been at Mason for almost 6 years and I’m happy that he is moving onto bigger and better things.”

Sheik Floradewan, a senior at Baruch University explained her satisfaction in her university’s new leader. “Baruch has one of the most diverse student bodies in New York and welcoming David Wu as Baruch’s first Asian American president shows progression for the CUNY system as a whole.”

“Coming from immigrant parents myself and having international friends, it goes to show that we can all make it. While I am a graduating senior and won’t be under his leadership, I know he is going to continue President Wallerstein’s legacy and make Baruch the best for its students, faculty and staff.” said Floradewan

Wu and his wife will be moving to New York City over the summer so that Wu can start his new position on July 1.

“Baruch University has a combination of two things: very high academic standards and a diverse student population,” Wu said. “They are one of the most selective public universities in the country and they serve students of all social-economic backgrounds, both of which speak to me. I am excited to start this new position.”