Students and Fairfax organizations join for a day of donations

Mason’s Day of Service kicked off the beginning of Mason’s two-week-long Homecoming celebration on Wednesday, Feb. 12. The all-day events spread across campus and out into the Fairfax community.

Starting in the Hub, students carried in bags full of canned food, shampoo, toilet paper and other necessities. The Hub Ballroom was prepared for the different donation drives, with the back of the room sectioned off to host the American Red Cross volunteers and allow students to give blood comfortably.

Mason’s Patriot Activities Council (PAC) worked with Inova services to make sure they had enough staff and equipment for the blood drive.

Freshman Computer Science major Sumaiya Nasim heard about the blood drive from a friend. “I’ve always wanted to give blood, but sometimes I get nervous,” she said.

Nasim talked about the impact days of service, like this event, have on the community.

“It’s important to give back to the community,” she said. “I know a lot of people do it during holidays, but I feel like it isn’t emphasized enough outside of holidays. People need that help all the time.”

In the front of the Ballroom, multiple tables were set  up; some were used as an information stations for students to learn more about PAC while others were used to check in and fill out consent and questionnaire forms to give blood.

Other tables were stocked high with donations. Student volunteers counted and sorted donations in order to keep track of inventory. Some items requested for donation were paper towels, soap bars, dental floss, toothbrushes and mouthwash.

Junior Janice Wang was one of the volunteers at the event.

“We’re part of Kappa Phi Lambda, so one of our pillars is service, actually, so when we found out that there was a Homecoming Day of Service … we decided to sign up,” Wang said.

Speaking of her role in the donation collection, Wang said, “Right now, we’re collecting all the food drive stuff, writing down names, the teams and the number of items they brought in.”

All food and supply donations will be given to Food for Others, a local Fairfax charity.

The teams Wang references are made up of some of Mason’s Greek Life organizations who have partnered up with other Fairfax service groups such as SafeSpot Fairfax and Inova hospital. For each donation given, the team earns a point. The team with the most service points at the end of the event wins a monetary prize. 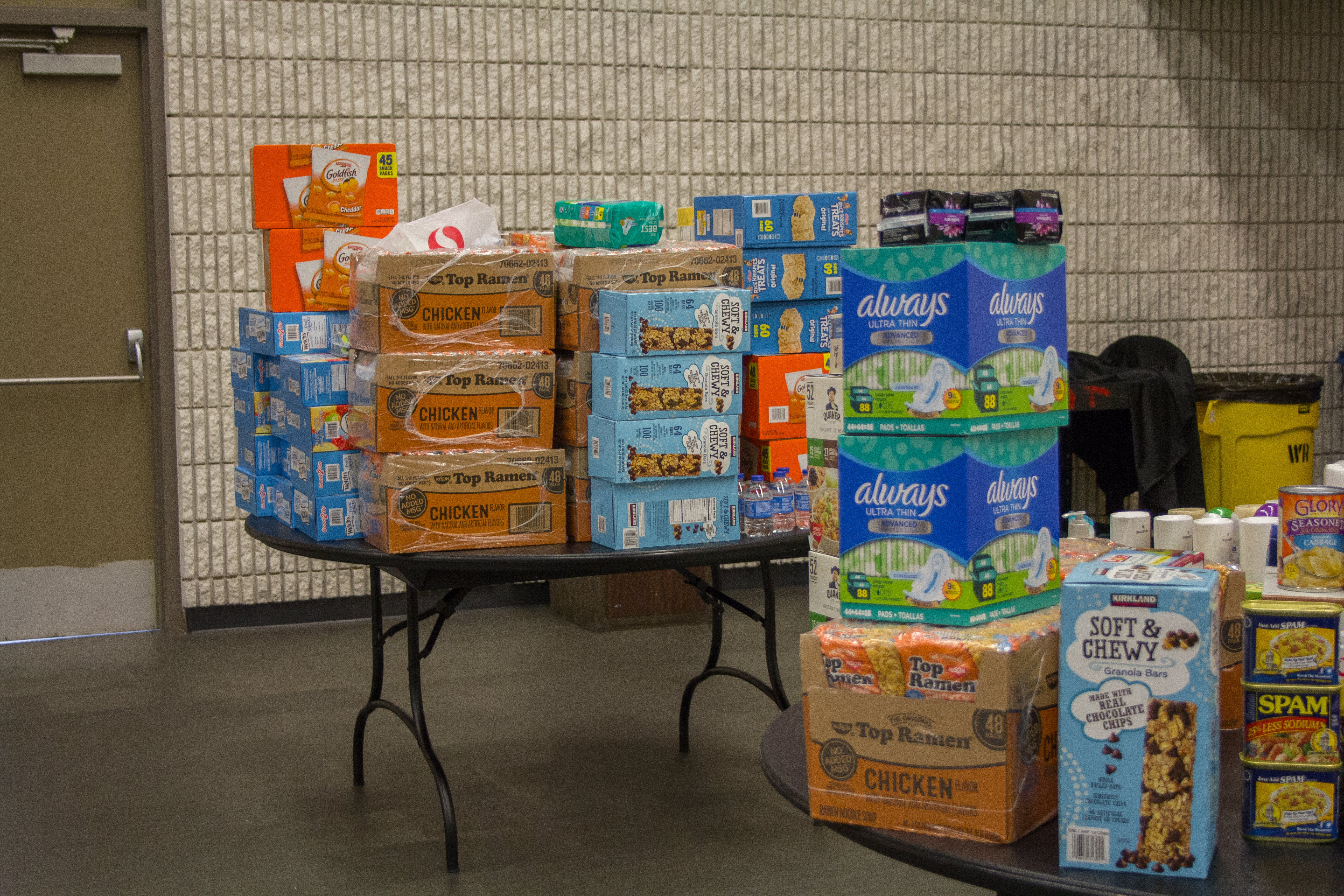 “A big part of Homecoming is the team competition aspect … The teams were tasked with creating service projects that were on or off campus that other Mason Students could be a part of, whether they were on a team or not,” McIntosh said.

Team one partnered Phi Kappa Sigma and Alpha Kappa Delta Phi to participate in a trash cleanup around Fairfax on Saturday. Team two comprised of Kappa Delta and Alpha Sigma Phi, who held a donation collection on Tuesday and Wednesday in the Johnson Center. Team three was represented by Alpha Phi Sigma Kappa, which held a Teddy Bear collection drive to later deliver to a children’s hospital.

The homecoming celebrations will continue on into next week, upcoming events include:

A Lip Sync Battle on Sunday, Feb. 15 in Dewberry Hall and Colin Jost’s Homecoming Headliner comedy performance in the Center for the Arts on Feb. 20

The Homecoming men’s basketball game will be on Saturday, Feb. 22, at 4:30 p.m. in EagleBank Arena.