Members of the Mason community gather to comment on wishes for next president, search process

A Board of Visitors (BOV) meeting was held shortly after, where the visitors voted to adhere to the language of the faculty handbook and ensure that general faculty are, in some way, involved in the search process.

“I’m incredibly pleased that the board has affirmed the spirit and the letter of our handbook language,” Letiecq said. “I think that’s incredibly meaningful.”

Much of the discussion in Friday’s committee meeting related to the presidential search options which the faculty senate voted on Nov. 6. There were three options which the faculty senate presented to the BOV: have a completely open presidential search process; hold a process in which faculty/students are able to meet candidates, but most sign non-disclosure agreements in order to do so; and hold an online forum in which candidates can anonymously talk to members of the Mason community. 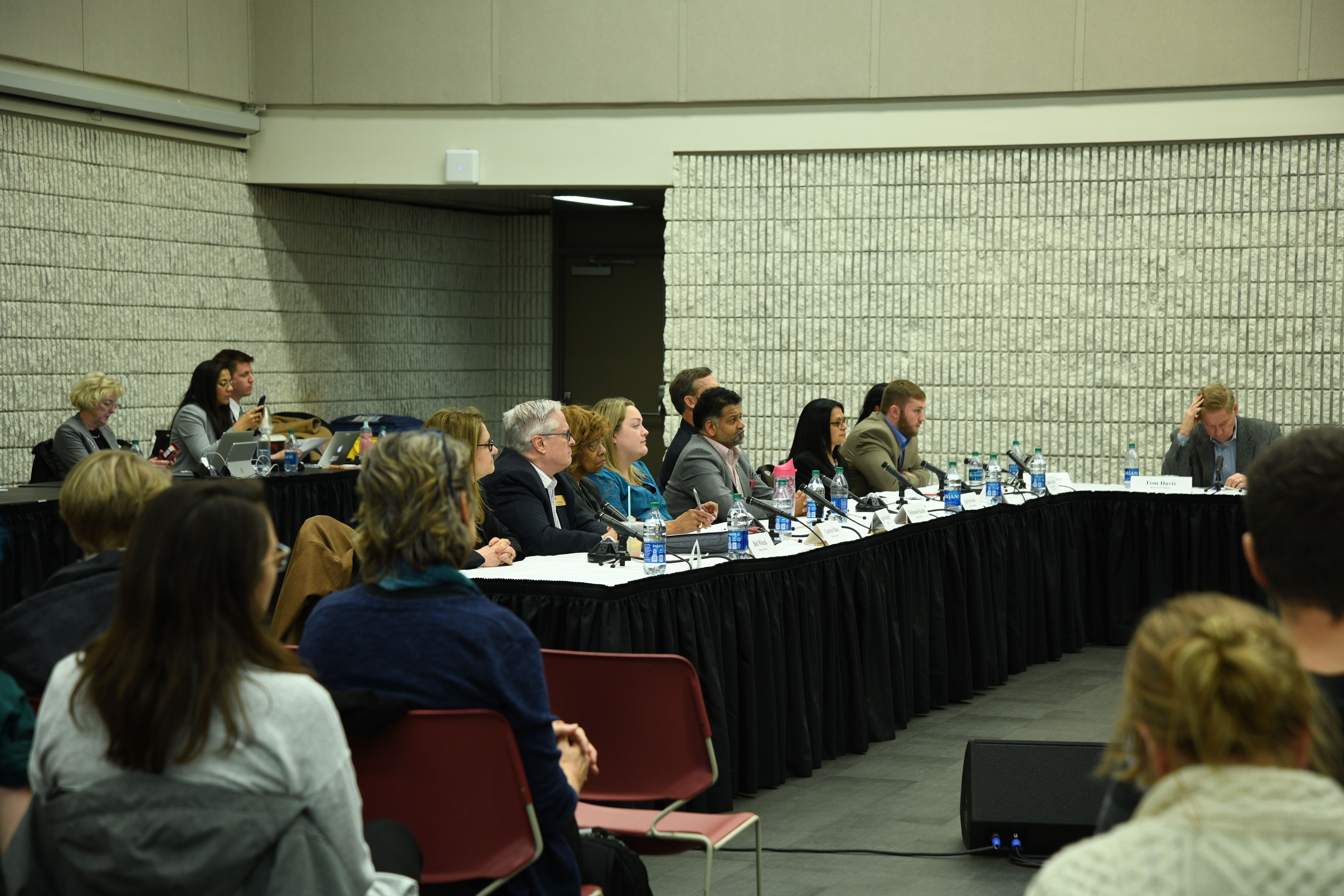 Faculty and students alike addressed their concerns for the current presidential search process in relation to transparency issues — both during the public comment portion and after the meeting was finished.

Gibson explained that if the third option were to move forward, it would not really be a public search. The faculty would not even be able to see a candidate’s resume, making it difficult to ask specific questions.

“I have concerns about this anonymous, online interaction as a substitute for true public forum that is attended in real-time by all [of] the community — that is when you can see in real-time how the actual human being interacts with the community and the vast diversity of this community, both in terms of staff, students and faculty,” Gibson said. “We view it as not a substitute for the true spirit and letter of the faculty handbook. We want them to come to campus and meet us in person.”

When asked by BOV member Ignacia Moreno about the breakdown of the search options, faculty senate Chair Shannon Davis explained that the options proposed to the BOV were in order of how much the faculty favored each option.

“Of the senators who voted, half — more than half actually — see the language of a completely open meeting as meeting the language of the faculty handbook,” Chair Davis said.

According to Davis, the online option is the least favorable.

Vice Rector Jimmy Hazel had other thoughts about the proposed processes. “I would reverse the rank order,” he said.

Rector Tom Davis explained that the BOV has previously tried to get rid of language in the faculty handbook stating that faculty had the opportunity to meet with a president, but he advocated for keeping that in there. In Nov. 2019, Davis said that the board had no legal obligation to uphold this.

Student Body President Camden Layton expressed his views on the idea of an open search process. “Going forward, I don’t know if I’m in favor of necessarily full openness … but I definitely think that we need more students involved and more open than the online [option],” Layton said.

Other students expressed their wish to have a completely open search. Student organizer Cassidy Pollard explained that she would prefer the most public option for the presidential search in order to build trust between the administration and the Mason community.

Members of the BOV expressed the concern that a public search would limit the pool of candidates.

“I am terribly concerned that we are directly pitting the rights of a private individual to be hired for a job against the public’s, not right to know, but the desire to know,” said Terri Cofer Beirne, chair of the GMU Foundation’s Board of Trustees. “And it’s very different. And I’m really struggling with what to do about this because I don’t want to limit ourselves. I don’t want to bias one candidate who’s willing to participate in an open process against one [who] is not.”

Hazel explained that, due to the confidentiality of the candidates, he could not comment on how large the pool is currently — and also stated that the timeline for the presidential search process is not set in stone when asked about Shannon Davis’ assertion at the general faculty meeting that they would like to choose a president before March.

“Like any project, we have a goal we’re working towards. We have always said that if we need to take more time to get the right outcome we will,” Hazel said. “We are getting into the final stages but we don’t have a set definitive date at this time.”

How the GOP Can Win on Climate Change