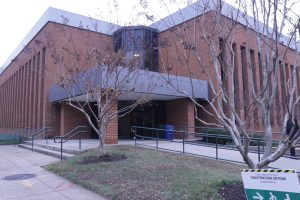 Until recently, I haven’t seen a lot of Mason’s campus. My normal routine keeps me centered around the Johnson Center and the Hub, only occasionally wandering out from the center of campus. Growing tired of my normal routine, I decided to walk around the parts of campus I had never been to.

This little trip made me realize that I really don’t like Mason’s architecture. Before coming to Mason, I imagined that all universities had grand architecture, reminiscent of the medieval universities in Europe.

Visiting universities like Virginia Tech and VMI, I marveled at the old stone buildings that made up these institutions. They had a certain charm that made me feel like I was somewhere important and that the work being done there was important.

Maybe my expectations were too high, but coming to Mason, the architecture leaves me disappointed and feels like a missed opportunity. After walking through Potomac Heights, I felt more disappointed then when I had begun my walk. The architecture there was sterile. Each building was the same, with no discerning features or unique personality. They reminded me of old Soviet Bloc apartments, as though they were designed to promote conformity and suppress individualism.

Much of Mason’s architecture is merely bland, but the Hub actively offends my eyes. I don’t know if it’s considered brutalist architecture, but it sure feels like it. From its bare concrete exterior to its awkwardly placed 90-degree arcs, the Hub does not inspire any positive emotions in me.

How we build things says something about us. Circling back to medieval universities, many of them centered around a cathedral. The purpose of their architecture was to proclaim the glory of God. Their size and splendor represented His greatness. Being around the grand cathedrals in Europe has a way of making you feel small. It makes you realize how vast the world is and that you’re just one individual in it — that despite being one person, we can be a part of something greater.

Mason’s architecture tells us that we are cold and conforming. Its blandness makes us feel like we are merely existing. There is no greater goal that’s being worked towards, only pointless repetition. Buildings like the Hub don’t inspire wonder, only confusion. Its odd shape and weirdly-placed arches give off the feeling of chaos. College students’ lives are chaotic enough. We don’t need the architecture to pile on.

Our environment can have an impact on us. This is why Mason’s architecture is important. How are we expected to strive for greatness when the environment around us tells us to just be average?

I’m under no illusions that Mason’s architecture is going to change, but isn’t how it can affect us worth a thought? Normally I wouldn’t take the time out of my day to take in my surroundings. Now, having done so, I think we all can gain from being a little more observant.

Israel and Palestine: What I Saw