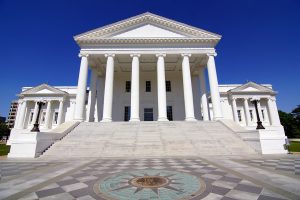 Virginia is in the process of one of the most progressive movements towards gun legislation in the U.S. On May 31, 2019, 12 people were killed in a mass shooting in Virginia Beach. Gov. Northam presented a package of eight gun control measures in a special session of the Virginia Senate, however, the Republican majority adjourned the session and nothing was passed.

Not all Virginians support the new gun control proposals. Last week, in Richmond, Va. citizens held a gun-rights rally with an attendance of over 20,000.

In addition to these laws, the Giffords Law Center to Prevent Violence also pointed out that these laws do not require background checks and do not require a waiting period to purchase a firearm.

Gov. Northam’s previous proposal that was rejected last summer will be proposed again, in the hope of getting different results. His proposal would ban assault weapons, silencers, high-capacity magazines and any other weapons considered dangerous; require background checks on firearm purchases; allow no more than one handgun purchase a month, which would reinstate a 2012 repeal; allow law enforcement to keep a person from firearms if they exhibit dangerous behavior and requires lost guns to be reported within a day.

This legislation would also ban guns assembled from purchased pieces or kits that don’t require background checks and are currently untraceable.

The NRA has stood behind the statement that the proposal would violate the Second Amendment. Brian Moran, the Virginia secretary of homeland security and public safety, has stated that this proposal “meets all tests that the Supreme Court has provided.”

Virginia gun owners would not have to give up their guns immediately provided that they register the gun with the state.

Northern Virginia spokeswoman Alena Yarmosky has stated that the governor would include a “grandfather clause” for current gun owners in Virginia to register their guns.

The NRA says otherwise, stating in its Institute for Legislative Action that registration of guns is the “first step to confiscation.”

In opposition to this legislation, there have been “Second Amendment sanctuaries” being declared in certain areas across Virginia to not enforce any gun laws that would be “unconstitutional.” However, these resolutions being proposed would not have any weight in reality, as Virginia state laws would preside over them.

College students across the DMV area have been voicing their opinions on the bill.

George Washington University student Ethan Somers, the Youth Coordinator for Guns Down America, shared his views on the legislation.

“The package of legislation is exactly what we’ve been hoping for. And there are a lot of pieces so there will be quite a few impacts,” Somers said.

“First, it will help to step the illegal guns flowing to D.C. and surrounding states through universal background checks and stolen gun reporting,” he explained. “It will also help keep children safe and will reduce the impact that guns have on suicide, which should bring the number of suicides down quite significantly in Virginia.”

He also acknowledged that this new legislation will help college students feel more safe on campus. “For college students specifically who are worried about mass shootings, these universal background checks will prevent people with records of violence from obtaining more weapons, and with ERPO [extreme risk protection orders] laws, we will be able to help people who are in crisis from using guns to hurt themselves or others by removing those guns for a period of time,” said Somers.

When contacted for comment, Mason’s Students Demand Action chapter told Fourth Estate they were unable to provide a comment regarding the legislation.