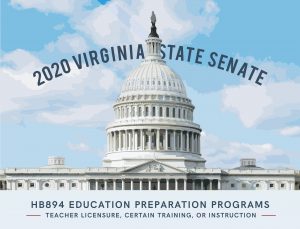 The Virginia House of Delegates passed HB 894, a new bill regarding methods taught in higher education, on Feb. 10. The bill has crossed over and is in the State Senate’s Public Education Subcommittee.

The bill passed with a vote of 97 yes and two no. It was originally introduced by Mark Levine (D) and Ibraheem Samirah (D).

The bill requires that students enrolled in education programs receive “instruction on positive behavior interventions and supports; crisis prevention and de-escalation; the use of physical restraint, consistent with regulations of the Board of Education; and appropriate alternative methods to reduce and prevent the need for the use of physical restraint and seclusion.”

Several professors at Mason had thoughts on the bill.

According to Margaret King-Sears and Jodi Duke, two professors within the Helen A. Kellar Institute for Human disAbilities, the bill comes at a time where positive behavior interventions and supports (PBIS) are more important than ever — and as physical restraint and exclusion practices become more controversial.

“If you think of the bottom of a triangle being PBIS — positive behavior intervention and supports — you want that to take up most of the triangle,” King-Sears said. “And then you want to just be able to recognize when a kid is about to get into crisis. So there’s your crisis prevention, and then you know what to do to deescalate.”

She continued, “So to the very tip, just a tiny bit of the tip of the triangle is — are the kids who may need physical restraint. But it’s very, very important that we know that … that’s something that should not be regularly used. People need specialized training in it, and it is controversial. And so we want to make sure that we’re — we’ve got everybody, not just knowing about these things, but using PBIS techniques with fidelity. So that [we] are doing all they can to make it a good, healthy learning environment for all the kids.”

Fidelity means that practices are used the way they are meant to be used.

King-Sears and Duke explained that these sorts of PBIS techniques are already being taught at Mason in both undergraduate and graduate-level courses.

“What we teach is a process called functional behavior assessment, where we teach our students who are future teachers how to collect a large amount of information about the individual’s behavior, and from multiple perspectives,” Duke said. She explained that collecting information from multiple perspectives ranges from observing the student to conducting interviews with parents.

“They put all of this information together and the goal is they figure out what is it that this child is trying to communicate through their behavior, because we teach our students that behavior is a form of communication,” Duke said.

Christan Coogle, an assistant professor within the early childhood education program, reiterated similar sentiments about PBIS. Coogle explained that PBIS techniques apply to all students and that, though techniques are taught, real-world experience is where people will find the most proactive learning.

“We know that there has to be opportunities to apply new knowledge in authentic settings, where the educator would have the opportunity to gain feedback and support before they are expected to use an evidence-based practice independently with fidelity,” she said.

According to second-year doctoral student Clarissa Bunch, punitive behavior is more heavily enforced on children with disabilities and Black children.

She explained that you can find data on this information with the Department of Education’s Civil Rights Data Collection.

“So one thing I really want to touch on from an early childhood special education perspective is that I think it’s important to remember that when we look at data, [it] continues to show that children with disabilities and children who are African American and Black — at least in early childhood — are disproportionately exposed to punitive practices, such as suspension, expulsion, physical restraint … And so for me, the use of positive behavior supports and the reduction of the suspensions and expulsions is rooted in my belief that all children deserve an equitable education experience,” Bunch said.

According to The Washington Post, as of October 2019, parents and disability rights groups were suing Fairfax County Public Schools over alleged use of improper restraint and seclusion toward students with disabilities.

Katherine Rowan to Retire from the Communication Department