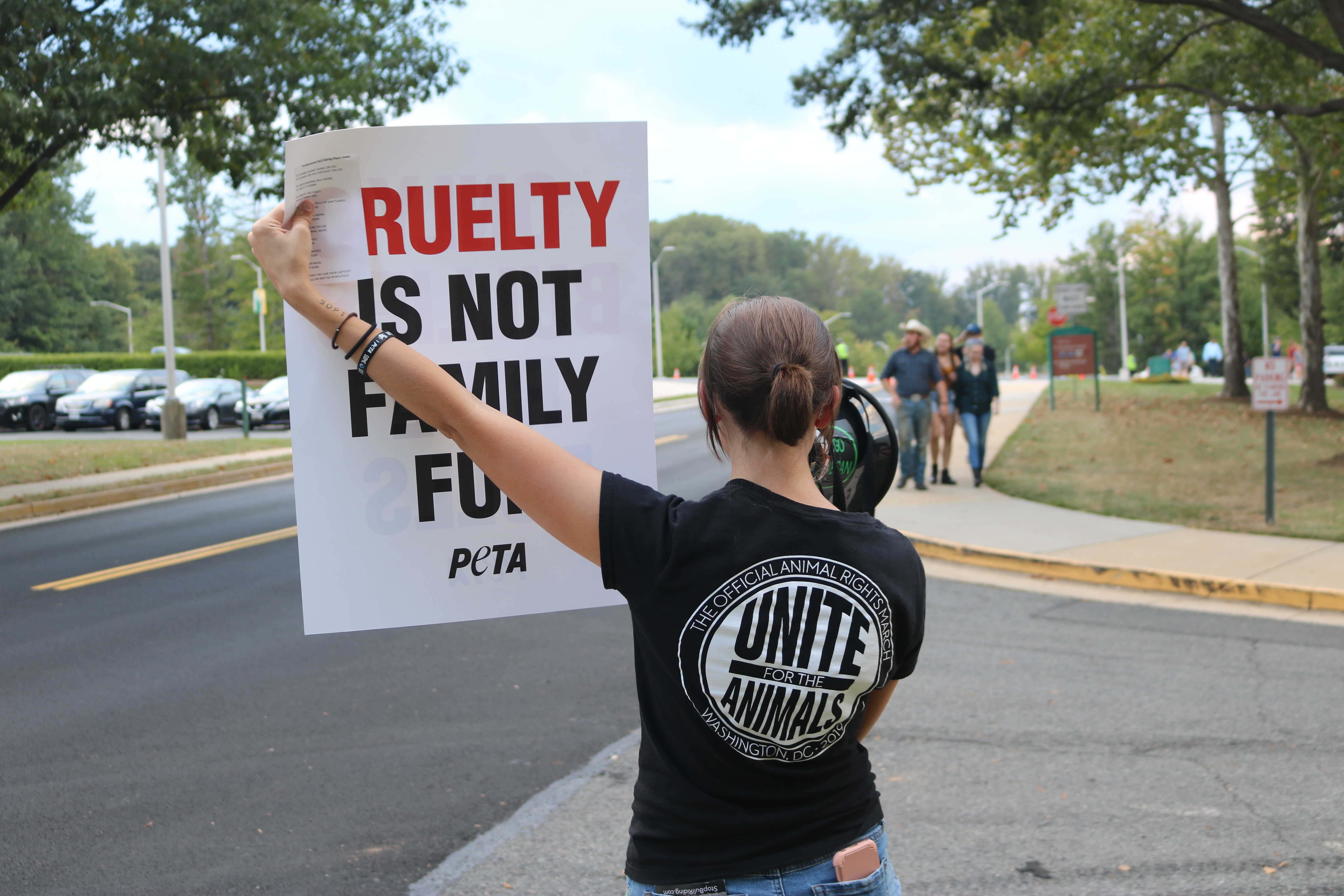 Protests took place over the weekend at a two-day Professional Bull Riding (PBR) event outside of EagleBank arena. The Vegan Society at GMU organized two separate protests through Facebook ahead of the scheduled event on Sept. 21-22.

PBR is described as “The Toughest Sport on Dirt.” Held at venues nationwide, the top 35 bull riders in the world compete each week in the televised Built Ford Tough Series. Each event is in a rock concert environment, complete with pulsating music, explosive pyrotechnics and fast-paced production.

The Vegan Society of GMU created an online petition prior to this event to gain awareness for their cause to “Ban All Events at George Mason University Involving the Use of Animals as Entertainment.” The petition garnered almost 14,800 signatures as of Sunday, Sept. 22.

On Sept. 21, protestors lined the sidewalks holding signs and chanting with megaphones near the west entrance, drawing attention from passing cars and attendees waiting to get into the arena. Mason students — as well as George Washington University and University of Maryland students — and local community members were present at the protest.

Signs from protestors read: “Animal entertainment is a dying industry,” “PBR: Get off our campus,” “Only bullies ride bulls” and more.

As well as signs, protestors chanted: “Their lives, not ours. Their backs, not ours” amongst other things. 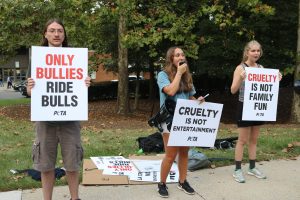 One protestor expressed how the animals were being used solely for entertainment. “They’re being bred into existence for the sole purpose of being used for money and entertainment,” said Rachael Nicoletta, member of the Vegan Society at GMU.

”I saw the petition on Facebook made by Rachael and I was honestly so shook. I remember looking at it for the first time and thinking that it had to be a joke, because things like this don’t happen at Goerge Mason but clearly they do,” said sophomore Allison Trainor when asked why she decided to protest.

In addition to the online petition, Nicoletta also gathered signatures on paper  — reached over four pages worth of names. To gain awareness ahead of the event, the Vegan Society at GMU handed out leaflets and chalked on surfaces around campus, as well as tabled in the Johnson Center.

The Vegan Society at GMU also created a letter and sent it to President Holton’s office, but received no response. When Nicolotta contacted her office directly, they referred her to the general manager of EagleBank Arena, Barry Geisler. According to Nicoletta, Geisler said that this was an issue they would have to “agree to disagree” on when she asked if PBR would be invited back for future years.

Regarding the animal welfare and safety of the bulls, PBR has detailed information on their website about the animal safety and welfare measures in place, including a redesigned bucking chute to improve rider and bull safety.

PBR also has measures in place for transporting the bulls, requiring them to ride in trailers with air-ride suspensions, not being hauled for more than 10 hours at a time and ensuring that they are housed at local ranch facilities with proper pen sizes for each bull.

Overall, Nicoletta emphasized that their goal was not to advocate for better welfare standards, but the complete abolishment of animals used for the entertainment industry.

“To be lunged around to different stadiums around the world and then forced into flank straps and then released into large, crowded, loud stadiums which is completely unnatural for bulls considering their general nature is gentle and docile,” said Nicoletta.

At the protest, the Vegan Society at GMU passed out leaflets from the organization Last Chance for Animals and flyers that read, “During these events, PBR staff agitate the bulls in a dark area before releasing them into a loud, bright and crowded stadium with a human on their back.”

In response to claims that it is unnatural for bulls to buck, PBR’s website states, “The success of bucking bull breeding programs around the world has proven that genetics are the main factor in determining [a] bull’s desire and ability to buck.”

In a 2017 article in The Standard, Andrew Giangola, a spokesperson for PBR, said, “The bull’s genitals are not touched (or) tied, and there is no electroshock. Some people are misled about how we treat these animals. Just as a thoroughbred race horse is raised to run, these bulls are raised to buck.“

“I think ultimately animals are being mistreated and I don’t think there’s a good reason to mistreat animals. And I definitely don’t think entertainment is one of those reasons,” said Mark, a junior at the University of Maryland. He had heard about the protests from a Mason student in a Facebook messenger group.

Nicoletta said that the Vegan Society will continue to protest the use of animals for entertainment until events of PBR’s kind are banned from campus.

Menstruation Stigma Has to End. Period.