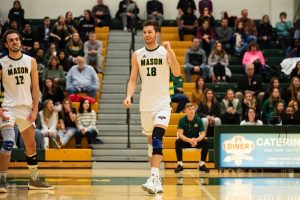 One might expect that a 6-foot-5-inch high school freshman would be the starting center on his school’s basketball team. However, for Mason men’s volleyball player Jack Reese, he would end up blocking a different type of ball.

“[In high school somebody] said, ‘Hey, you should come try out and play basketball,’” Reese said. “I ended up trying out for the basketball team. I didn’t make it; I wasn’t any good at basketball. At that point, I had no sport to play.”

However, his school also had a varsity volleyball team, and some of the players recruited him to try out. It was not long before Reese discovered volleyball was a perfect match for him.

“I came out to volleyball, and it was almost natural to me,” Reese said. “I was almost instantly good at volleyball. Obviously, I had to work at it a lot, but I had a pretty good feel of the game right away. And then I just fell in love with the game and kept pursuing it.”

In his senior year of high school, Reese was named First-Team All-League and First-Team All-State at Fox Chapel High School in Pittsburgh, Pa. He spent his first year of college at the University of Hawai’i, where he redshirted the 2017 season. However, after that, Reese felt he needed a change.

“At that point, I was just looking to come closer to home,” he said. “I was looking at all of the schools in the area. [One thing] about Mason that really stood out to me was the brotherhood here. I really liked the sense of camaraderie on this team.”

After spending more than two years with the team, he still feels the same way about it.

“This team is like no other team in the country,” Reese said. “Everyone is so close on this team, and we always have each other’s backs no matter what. It’s really a special thing to be a part of because it’s such a close bond and we all really love each other.”

The now-6-foot-8-inch middle blocker arrived in Fairfax and made an immediate impact on the team. In his first two years in the green and gold, he earned two second-team EIVA honors along with earning two EIVA defensive player of the week awards.

“There’s room for improvement. Second team two years in a row, I’m going for first this year,” Reese said, with a smile. However, he isn’t letting these awards impact his drive to succeed.

“It’s just more of a reminder that I’m doing the right things, and I just need to continue working hard and getting better. The main goal is obviously to win the EIVA Championship and then go on and make a run in the NCAA’s,” Reese said. 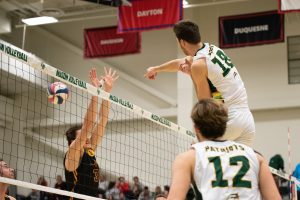 Reese’s best attribute on the volleyball court is his defensive abilities. In his first two years at Mason, he has been the team leader in blocks, totaling 77 in his freshman year and 86 in his sophomore year. In his sophomore season, Reese blocked 1.15 balls per set, ranking second in the EIVA. His career-high for blocks in one game came is 12, which he recorded on March 15, 2019, against Grand Canyon University.

“Blocking has always been a natural thing for me,” Reese said.

On his offensive attacking, Reese said, “I’ve been pretty efficient with that, but obviously there’s still room for improvement. I feel like that has progressively gotten better each year.”

Through the first seven games of the 2020 season, Reese leads the Patriots in blocks (28), hitting percentage (.463), and is fourth on the team in kills (50). However, he realizes that there are improvements that he needs to make in his game to be more well-rounded.

“My serve is just not there. My serve is probably the weakest part of my game. I’m always trying to work on that,” Reese said. “Nobody is perfect, there’s improvements to be made in every single facet of everybody’s game. I’m always getting in the gym and giving 100 percent every day and trying to get better.”

Reese and the Patriots are off to a good start in 2020 with a 4-3 record through seven games, with a win over No. 9 ranked Pepperdine University and a three sets to zero win over No. 12 ranked University of Southern California.

Some marquee matchups still to come include home games against No. 4 Long Beach State on March 21, No. 5 UC Irvine on March 22, and No. 7 Penn State on April 18.

This season, the Patriots have a unique motivational factor that the team has not had in 30 years: potential home-court advantage in the NCAA Men’s Volleyball Championship.

From May 7-9, EagleBank Arena will host the two semi-final contests as well as the National Championship game. For Reese, playing in this environment would be a dream come true.

“That would be the coolest experience ever,” Reese said. “That is the goal this year, to get into EagleBank and play in front of a home crowd. I really hope we can make that opportunity happen, and I think we have a good chance at it too.”