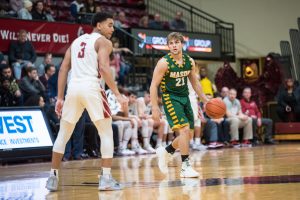 Jack Tempchin has never once shied away from a challenge. The five foot seven point guard played baseball, soccer and basketball as a child, but chose to pursue basketball because it seemed like more of a challenge.

“I just liked the look that people had when I told them I played basketball. They’re kind of like, ‘oh, what else, what else do you do?’” Tempchin said.

“I just kind of like the chip on my shoulder playing basketball. When I was on the court like I would hear things in the crowd and it made me want to be better,” he continued.

Tempchin’s biggest challenge he faced in basketball was rejection and doubt.

His JV coach would not tell him what he could do to play better, but simply told him he was not tall enough. Tempchin used this as motivation to work harder, but it still impacted how he viewed his talents.

“When I faced that doubt, it makes you want to quit almost and that made me stronger mentally and then that’s when I pushed harder and like every time I felt some resistance,” Tempchin said.

Despite receiving Division II and Division III offers out of high school, Tempchin kept his eyes on the Division I level. He went to the University of Maryland with the hopes of walking on to the team.

After he found out that all of the walk-on spots were filled he started down the road of just being a normal student, unsure of whether or not he wanted to be a practice player for the women’s basketball team.

His plans quickly changed after meeting one of the practice players in one of his classes. Tempchin then spent the 2016-2017 season with the team that eventually made the Sweet 16.

“The coaches are great, the players are so nice, and it was very casual but it was really nice to be part of the team. It made me realize that I wanted to be on a men’s team and really continue playing so that was a great experience and one I’m glad I took,” he said.

While at Maryland, Tempchin began looking for a school to transfer to where he could become a walk-on. With help, he sent out his film, his story and his grades to 100 different schools, sometimes to multiple coaches on a school’s staff.

“[Coach Dane Fischer] was one of the ones that responded to say he really liked my film. And that really helped me,” he said.

Tempchin continued, “I took a visit, it turned out one of my trainers knew Coach Simp [Coach Simpkins] and so they were like, ‘Yeah come take a visit.’ I met with Coach [Dave] Paulsen. I met all the coaches, met some of the players and I knew I didn’t want to take any more visits after that, I knew that’s where I wanted to be.”

“The first workout knew where he was a little overmatched physically, but he just competed and worked so hard and was relentless and always wanting more. And that just always stuck out,” he said.

He never forgot the challenges he went through prior to coming to Mason, wearing number 21 as a reminder.

As a high school sophomore, Tempchin made varsity and got the number 21 because it was the smallest jersey they had.

The practice before the team’s Jan. 22 matchup against UMass, Tempchin hit a shot that led to his team’s win. Paulsen told him if he could hit the shot again practice would be over.

At shootaround the next day Paulsen handed Tempchin a game ball with his name on it for that shot, something Tempchin believed was a joke.

Paulsen then told him to turn the ball over, and Tempchin read the words “full scholarship” written on it.

Cheers erupted and his teammates surrounded him in a group hug in a video later posted on the team’s social media.

“My teammates were so excited for me, I was so excited. Just an incredible feeling of emotion and just felt like so supported, it was really nice,” Tempchin said.

When the team found themselves with an extra scholarship spot, Paulsen knew there was one student-athlete he had to give it to.

“Nobody is more deserving and sometimes you can’t always do that … But we had one and a) he’s deserving of it and b) he’s a galvanizing force on our team,” he said.

No one except Paulsen, who got the idea for the scholarship reveal while on a run, and the team’s director of basketball operations knew what would be happening at shootaround that day.

“That was a genuine, heartfelt [reaction], they love the kid and respect him,” Paulsen said.

“I think you want to be in a situation where nothing’s given, nothing’s promised. Everything’s earned, but once somebody earns something, they get the recognition,” he continued.

His teammate AJ Wilson first saw him play was in high school as they are both from the same area.

“He’s a really crafty guard. I was impressed with his game, everyone was kind of doubting him because he’s small. I was awfully impressed with how he saw the floor, his IQ was beyond his years,” Wilson said.

Wilson, who has known Tempchin for years, said, “It definitely felt good having somebody from back home at school with you. It’s like having a brother going to school with you, it’s a great feeling.”

“We always told Jack if anyone deserves a scholarship it’s you because you work so hard and everything like that,” Wilson said.

“So, when Coach gave him that ball that said he had a scholarship we were all happy,” he continued.

Tempchin initially did not tell anyone about his scholarship, wanting to tell his mom first. He waited until after the game that evening to tell his family.

He believes his parents had the biggest influence on his basketball career.

“My dad used to take me and my brother to all these games. And my mom is probably the most competitive person I know,” Tempchin said.

“I missed so many family events, school events, stuff like that, stuff that you think that your mom wouldn’t let you miss. [But] my mom was the one taking me to a tournament or practice like I couldn’t miss any of that. And she just pushed me really hard and they both just supported me so much, it’s just unbelievable,” he continued.

His mom’s birthday was on Jan. 7, so he told her that he had ordered her something and it had just arrived.

She was slightly confused when he handed her the basketball until he told her to flip it over.

“She was so happy. She told me how proud she was of me and my dad was excited for me … It was nice to share that moment with her,” Tempchin said.

Tempchin is incredibly grateful for the scholarship. “I don’t feel like it was my achievement. Thinking about how many times I wanted to quit, whether it’s been friends, family, coaches — they just told me ‘don’t quit.’ There’s always one person that says no and that’s what you want to listen to,” he said.