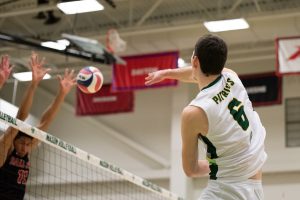 Over winter break women’s basketball went 3-6, including a 1-4 start to conference play. However, the Patriots did have to face Dayton, Davidson and Fordham, three of the top five teams in the conference, in the first five games.

Nicole Cardaño-Hillary is doing a little bit of everything for the team so far in conference play, leading the team with 16.0 points per game while also contributing 5.0 rebounds and 3.6 assists per game.

After the team’s loss to Fordham on Jan. 19, head coach Nyla Milleson said, “It doesn’t get any easier as we go to Duquesne. You know, there’s not an easy game in the conference, top to bottom. You know, it’s probably as good as it’s been since I’ve been here … but you know every game is a dogfight.”

She also added that with a road trip to Pittsburgh to start the semester, the team would be missing the first two days of classes.

However, she also said, “This is a focused team. This is a high academic team. They’ll do what they have to do. And in order to keep [up] their academics, you know, [it’s] very frustrating to have to miss the first few days of class but we’ve already taken care of what that has to be done.”

Jacy Bolton believes that her team has been able to learn a lot from the first few games in conference play, saying, “Conference play has given us a lot of lessons and we are going to continue to work and build off of those lessons. We are a team that is capable of many things and we are working every day to make our team successful.”

Between semesters men’s basketball went 2-5, including a 1-4 start to conference play. The team has been shorthanded after losing Justin Kier again. The team’s lone win in conference play came at La Salle on Jan. 11.

After the team’s Jan. 22 win over UMass, Greene said, “In the A-10 you know anybody can lose any night and anybody can win any night so you can’t take no team for granted, and we got to take it one game at a time … but during school, it’s going to be a little challenging but, you know, I feel like our guys, my brothers, can do that. And we’re up for that challenge.”

Head coach Dave Paulsen understands the challenges but also the advantages of his student-athletes being back in class.

He said, “They’re back in a more normal routine. And they’re back with the student body. And we’ve got a good system in terms of when they’re in class and then when we have our designated practice time and, but it’s, a little bit of balance and we have study hall when we’re on the road and I think for the most part, you know these guys have done a pretty good job of balancing that stuff.”

Track and field had a successful break, hosting the Father Diamond Invitational and also traveling to compete in the Great Dane Classic and Keydet Invitational.

At the Father Diamond Invitational Mason had 13 first-place finishes. This includes Jaylen Simmons, who finished first in the shot put with a personal-best 17.51 meters, a mark good enough to surpass the NCAA-qualifying mark.

On the women’s side, Ashley Lewis was named Track Performer of the Week.

The following week Simmons again won Field Performer of the Week and Vilde Våge Henriksen, a Norway native, won Rookie of the Week.

Simmons improved his personal best, throwing for 18.14m, 31st best in the country.

Våge Henriksen finished in second place in the 1000-meter run at the Keydet Invitational. She finished behind her teammate Lewis and the pair’s times rank first and second in the A-10 this season.

Head coach Andrew Gerard said, “We’re in a good position at this point in the season. With the diversity of events in T&F [Track and Field], the progression of athletes in different event groups can be very different, especially at the early- to mid-season meets.”

He continued, “Throwers, for example, don’t get ready at the same rate as sprinters or pole vaulters or distance runners, which makes getting a whole track team on the same page for one competition in the mid-season a bit like juggling a chainsaw, bowling ball, a tennis ball and a feather all at the same time. But the various groups are all where they need to be for now and on point for the championship meets late in the season.”

Men’s volleyball went 2-2 over break, despite competing against four of the top-12 teams in the country.

After an opening night loss to then No. 2 UCLA, the team bounced back defeating No. 12 USC in three straight sets. Despite falling to No. 7 Stanford, the team also defeated No. 9 Pepperdine 3-1.

Head coach Jay Hosack created a difficult nonconference schedule for his team, which was able to compete with some of the top teams in the country.

Hosack said, “It’s very early in the year, but I am happy with our team’s work ethic and competition level. When we play with heart and passion I like our chances against anybody.”

The Patriots will need to continue playing with heart and passion, as they will be taking on No. 11 Loyola-Chicago and No. 6 Lewis University in the Uvaldo Acosta Invitational on Jan. 31 and Feb. 1.

Senior leader Sam Greenslade said, “The beginning of the season has been a very fun and challenging start against all ranked opponents. These early tests are a great way to see what we’re made of along with preparing us for the challenges down the road. As a team, we are very excited about where we are headed.”

On Monday, Jan. 13, Director of Athletics Brad Edwards announced that Elmar Bolowich would be the next men’s soccer head coach. Bolowich previously coached North Carolina and Creighton to national prominence.

He has led his teams to 21 combined NCAA appearances and six College Cup appearances. Bolowich comes to Mason with an impressive 395-184-57 record.

In the press release from Mason Athletes, Edwards stated, “Coach Bolowich is not only one of the best and most accomplished soccer coaches in today’s game — he is the type of individual who brings a wealth of experience in higher education and NCAA Athletics … We are excited to have an icon like Coach Bolowich lead, educate and champion our men’s soccer program.”

In the same release, Bolowich said, “Thank you to Brad Edwards and George Mason University for this opportunity to return to college soccer where I can best use my skills and hopefully be an impact for a program that has so much potential … We want soccer at George Mason to rise to a nationally competitive level and ​we want to create a soccer culture on campus. I look forward to this challenge and I’m ready to get going.”