A deeper look into the essence of the musical community 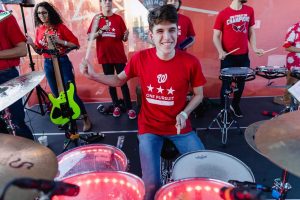 At the core of Mason’s Green Machine is a lot of heart, continuous enthusiasm and a strong will to perform.

Excitement surrounding Green Machine, Mason’s multi-disciplinary arts ensemble, spiked in 2006, when Mason’s men’s basketball made it to the NCAA Final Four. However, their story did not end there. Since then, the group has received national recognition, played with major artists like Lady Antebellum and, most recently, the group performed at the 2019 World Series.

Junior music major Aaron Grossman said, “From when I first heard about the Green Machine, I knew I’ve always wanted to be in it because I love the energy.”

For others like senior music major Anthony Dass, “Green Machine was definitely something that just came about [in search for colleges].” Dass added that regardless of how you find Green Machine, “If you have the capability, and the desire, you can be there.”

For the World Series, Dass specifically created an arrangement for the song “Baby Shark,” a continuity throughout the National’s playoff run. He did so in only a few hours. Usually, a Green Machine arrangement takes him three weeks.

Dass continued, “For high and low-profile events, we are very prepared. It’s what we do and what comes naturally.

Senior music major Angela Estay said, “I think the [World Series] game was a more high-energy event because the community was very excited for Green Machine and the Nationals. I actually got into baseball after we performed at Game 3 because I thought, ‘Ah, this is kinda cool.’”

“A big part as a student is just being involved,” Estay said. “A lot of people don’t know that you don’t have to be a music major to be involved in Green Machine. If you’re not good at playing an instrument, you can get better, and that’s all it is.”

Dass continued, “Showing up is half the battle, and Green Machine allows people to do that in every form possible. Whether it’s the pep band, drumline, winter guard, the fife and drum, the civil war band, the funk band, you-name-it band. Anything that the Green Machine is, it allows people to participate on so many levels for so many things.”

Dr. Michael Nickens, better known as “Doc Nix,” is an integral part of the function and performance of Green Machine. Nickens is the director of the organization and is one of the most recognizable figures on campus.

“We have 250 members of the Green Machine this semester alone,” he said. “Many students do not want to continue with music as a profession, but they didn’t want to put down their horn and that’s why our community is built upon our own flexibility.”

Nickens emphasized the concept of risk. To him, risk is something that allows everyone to push their own boundaries.

“When the music is live and good, it transforms you,” he said. “And there’s nothing like seeing that quiet kid from your math class go out and rip a guitar solo and leave orbit.”

Dass believes that students should all find a way to contribute to their university environment. “In terms of school pride, this is everyone’s college experience and you really have to grab it by the reigns and go,” he said. “You really have to support the institution that you came to, including groups like the Green Machine.”

Mason’s basketball games are opportunities to make memories with friends and gain some great experiences — not just listen to great music.

“As we pick songs [to perform], we continue to bring personality, feelings and soul,” Nickens said. “We have to tap [the audience] into it and it’s just dope.”

According to Nickens, Green Machine is “forging new ground and new tunes. Just as our players mature, we will too. I know the best thing is ahead of us — keep your eyes and ears open.”