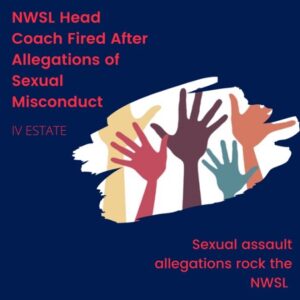 After a series of scandals and controversies that have spanned the summer season, fans and players are demanding fundamental changes to the top professional women’s soccer league in the U.S.

On May 15, 2021, the National Women’s Soccer League (NWSL) kicked off its ninth season, one that would turn out to be one of the messiest, most controversial seasons of women’s soccer.

The scandals include the firing of four head coaches and a general manager for violating the league’s anti-harassment policy — which was adopted in April.

The breaking point for many was the recent firing of North Carolina Courage head coach Paul Riley for allegations of sexual misconduct.

Farrelly was first coached by Riley during her time with the Philadelphia Independence, which was part of Women’s Professional Soccer (WPS), the league that came before the NWSL, and Farrelly’s first professional team.

Farrelly says Riley took special interest in her and, after suffering a disappointing loss with the Independence, Farrelly alleges Riley took her to his hotel room and coerced her to have sex with him.

After the WPS folded, Farrelly was playing with FC Kansas City in the newly formed NWSL when Riley was hired by the Portland Thorns. Soon after, Riley made trade. Here Farrelly became teammates with Shim.

The pair allege in the article that Riley pressured them to kiss each other and sent lewd pictures while threatening to put the whole team through extreme training if they did not comply. The Thorns players also reportedly had to endure inappropriate comments made by Riley about their weight and sexual orientation.

In The Athletic article, Riley denied all accusations, saying, “I have never had sex with, or made sexual advances towards those players.”

In 2015, Shim filed a complaint against Riley to the Thorns and it was announced the week after that Riley’s contract would not be renewed. Later that year, Western New York Flash hired Riley, where he won the 2016 Championship.

The Flash eventually moved to Cary, North Carolina and was renamed the Courage. Here, Riley won the 2018 and 2019 NWSL Championship and the 2017 and 2018 Coach of the Year Award to boast.

In April 2021, Shim emailed League Commissioner Lisa Baird regarding Riley’s past behavior. In response, Baird thanked Shim for speaking up but said the situation has been “investigated to conclusion.” These emails have been shared via Twitter by Alex Morgan, who was a teammate of Farrelly and Shim with the Thorns.

Once again, the league chose to save face rather than protect its players. Women’s soccer has never been more popular than it is right now, but continued silencing and corruption by the people in charge has left fans with cause for concern.

Hours after the original story broke, the Courage and the NWSL released statements saying that Riley had been fired as coach. The same night, a U.S. Soccer statement announced that they had suspended Riley’s coaching license. On Oct. 1, the NWSL announced that the matches scheduled for the weekend would not go ahead as planned.

This story comes days after the Washington Spirit fired Richie Burke after allegations were made by former player Kaiya McCullough in August.

These recent scandals have been the final straw for fans and players as they are demanding the league take responsibility. As the controversies started to pile up over the summer, players like Megan Rapinoe, Nadia Nadim and Becky Sauerbrunn have called out the league.

The NWSL likes to claim that it is the best in the world, but, other than the array of talent the league boasts, there is not much evidence to back up that claim. The NWSL is the third women’s professional league in the United States, but it seems it has not learned from the mistakes of the leagues that came before it.

Women’s club soccer is, historically, an unstable sport. Most of the attention and money goes into the men’s game and international events. Fans of women’s soccer are constantly left worried that their favorite teams and players will not get the support they need.

After the failure of its predecessors, some speculate that the NWSL might not survive the myriad of controversies it had endured this year. Others are more hopeful about the future of the sport. Could this chaotic situation result in a new age of women’s soccer where players are both believed and protected by those in power?

View all posts by bendealey →

MASON TO BEGIN OFFERING BOOSTER SHOTS OF THE PFIZER VACCINE