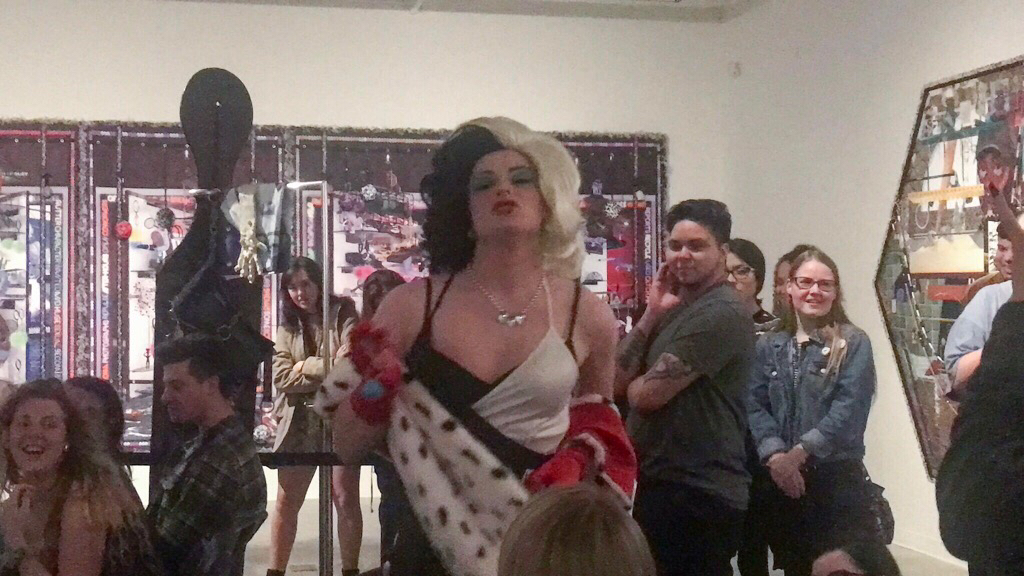 On Friday, Oct. 25, the small Gillespie Gallery of Art in the Art and Design Building buzzed with chatter. From the moment the doors opened, the audience section was full, and many crowded at the back of the room filled with anticipation. Finally, the lights dimmed and the first drag queen began her performance.

At the Amateur Drag Show held by Mason’s Pride Alliance, 11 drag queens and kings performed to songs ranging from 3OH!3’s “Touchin’ on My” to Billie Ellish’s “Bad Guy.” Some performers used props in their routines, like stools and tables. The event was hosted by drag queen Ma’sVusi, who kicked off the event by performing Lady Gaga’s “Fashion,” wearing a purple see-through jacket, jean shorts and black heels.

“How many of you are registered to vote?” Ma’sVusi asked after her performance, leading the crowd in a round of applause after she received positive cheers. She then asked, “How many of you are voting for Donald Trump?” The audience gave an answer considerably more quiet, with only a few nervous laughs heard. Then, Ma’sVusi led the crowd in another round of applause.

Ma’sVusi also mentioned that Pride Alliance canvasses for Laura Jane Cohen, who is running for the Springfield seat on the Fairfax County school board. She described Cohen as an ally, someone that is willing to stand up for the children in her district and fight for their rights.

Drag queen Regina Cyan was one of the notable performers at the event. Stepping out from backstage, she was dressed as Cruella De Vil, complete with a fake dalmatian fur coat and long cigar. Cyan performed to Selena Gomez’s version of “Cruella De Vil,” throwing her coat into the audience, hitting a member seated in the front row.

“She is the most fashionable villain ever, and I thought, ‘Why not?’” Cyan said. “I just really loved the idea.” Cyan said that she would definitely perform again, and was already thinking of songs that she could use in a future performance.

Audience participation was highly stressed by the performers at the event.

“As a person who’s been to only one other drag show, it’s part of the experience,” freshman art major Ed Girardin said. “You need to interact. ‘Cause they’re interacting with you, so when you’re given the opportunity to interact back you just gotta. You can’t say no.”

The last group, a duo wearing goat and bunny masks called BUNNi & GOATFACE, invited three audience members up to the stage to hula hoop with them. Several students requested to take a photo with them after the event.

At the very end of the night, all the performers lined up and began to dance with the audience. Lizzo’s “Truth Hurts” could be heard playing from outside the gallery.

Though the Amateur Drag Show has ended, Pride Alliance will continue to hold events this semester, including the Trans Day of Remembrance Panel and Vigil on Nov. 18.

Lauren Ashlaie: A Heart That Belongs to Performance

A Needless Contribution to Systemic Classism