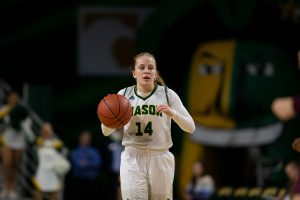 Mason women’s basketball’s Nicole Cardaño-Hillary has another accolade under her belt prior to her junior year: being named to the 2020 Nancy Lieberman Award Watch List.

The acclaimed watch list looks at the top 20 candidates that could be honored as the nation’s best point guard at the Division I level.

According to the NCAA, candidates for this award must exhibit “the floor leadership, play-making and ball-handling skills of Class of 1996 Hall of Famer Nancy Lieberman.”

During her time at Mason, Cardaño-Hillary has been named 2019 Atlantic 10 Player of the Year and 2018 A-10 Rookie of the Year. She is the first Mason player to be nominated for the watch list.

Heading into the 2019-2020 season, Cardaño-Hillary ranks 14th on the Mason all-time scoring list with 1,218 points and 12th in three-point field goals made (111). She is only 529 points from being Mason’s all-time leading scorer, an accomplishment that has the potential to happen this year based on her current scoring rate.

Joining Cardaño-Hillary on the watch list is her high school teammate, Japreece Dean, a point guard at UCLA.

The two are very much alike in terms of their competitive drive. For instance, Dean, while playing in the 2015 state semi-finals in Texas with Cardaño-Hillary, had a 100-degree fever and still insisted on playing.

However, only time will tell if Cardaño-Hillary can stay on the list until the new year, as it is whittled down as the season goes on until there is one point guard remaining.

As head coach Nyla Milleson said back in Cardaño-Hillary’s freshman season, “the sky’s the limit” for what she can accomplish, and as her stats have shown, she has stayed the course.