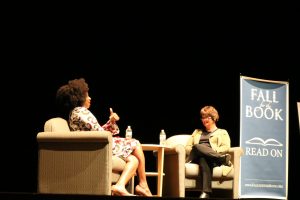 As a part of the 21st annual Fall for the Book Festival, critically acclaimed author Chimamanda Ngozi Adichie spent an afternoon discussing her novel “We Should All Be Feminists” with Interim President Anne Holton in the Center for the Arts.

The event was one of many highlights taking place during the annual Fall for the Book Festival held at Mason from Oct. 10–12. Every year, Fall for the Book hosts a collection of authors to help connect readers and writers on a personal level, as well as increase the cultural awareness and intelligence in the Mason community.

“We Should All Be Feminists” was selected by the Mason Reads committee as their 2019-2020 title. Over the years, her books have collected various awards including the Orange Prize for Fiction (now the Women’s Prize for Fiction), New York Times Notable Book and the National Book Critics Circle Award.

According to her website, her work has been translated into over 30 languages. “We Should All Be Feminists,” an adaptation of her popular 2012 TED Talk, is a New York Times best-seller. In the book, Adichie looks to define and explore feminism for a 21st-century audience.

Adichie spent her youth in Nigeria, raised in a university town called Enugu. Her father was a professor, and her mother was the first female registrar at the University of Nigeria, Nsukka. Currently, Adichie splits her time between Nigeria and the U.S.

The author spent the afternoon providing some background on her life, along with offering advice and perspectives to audience members about likability, socialization and feminism. Mostly, Adichie spoke about some of the global systemic issues that have historically placed women at a disadvantage.

She also believes that a lot of societal issues revolving around gender and gender roles can be changed with reeducation at an earlier stage.

“Girls are taught very early to change themselves to please other people,” she said. “I think it’s the reason a lot of abuse can happen because girls ‘play nice’ in a way that boys are not socialized to do.”

“I think the world is such a diverse, beautiful place, despite all of it’s problems, that there’s somebody that will like you the way you are,” she added.

Throughout the interview, Holton asked Adichie about the pressing issues of wage equality and sexual violence on college campuses. She also said she is a “fan girl” of Adichie’s work, and that her books have been a major point of study in her personal book club.

In addition to Holton’s material, Adichie also managed to answer a few questions from the audience, read by the interim president.

When asked about self-care strategies, Adichie said that she honestly feels like maybe she isn’t doing enough. Citing her own experiences, Holton said, “As a parent of a 4-year-old, the answer may be that you don’t,” which the audience responded to with resounding laughter.

In addition to the exploration of gender, inequality and femininity, Adichie also discussed her love for Nigerian designers and some of the introspective challenges of raising a daughter.

Discussing future plans for her work, Adichie confirmed that “Americanah,” her 2013 Book Critics Circle Award-winning novel, is currently being made into an HBO miniseries starring Lupita Nyong’o.