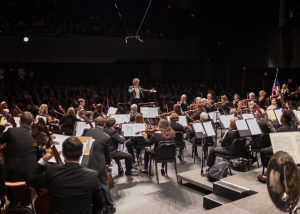 The Fairfax Symphony Orchestra (FSO) presented “Music from the Downton Abbey Era” at the Center for the Arts in conjunction with the release of the new “Downton Abbey” movie.

“Downton Abbey,” a wildly popular British drama created by Julian Fellowes, follows the life of a wealthy English family and the management of their grand estate. The show was a hit. According to IMDb, the PBS series collected over 57 awards, including three Golden Globes, over its five-year run.

The FSO elected to open their fall season at Mason with a curation of mostly English music, including the original suite composed for the series, to accompany the release of the film.

The show is set in a classical period of English history, but the music from the concert does not align with typical performances from orchestras in the U.S. On the list of scores performed, there was no Brahms, Beethoven, Bach, Mozart, Schubert or Rachmaninoff.

The performance was created to place the audience into the series, rather than re-highlight a popular work from one of the many stalwarts of classical music.

According to Christopher Zimmerman, the ensemble’s conductor and musical director, the timing of the concert and the film release are no coincidence. Zimmerman was originally approached by the FSO’s executive director Jonathan Kerr, and being an Englishman, he took to the idea.

Zimmerman has been working with the FSO for over 10 years, as well as conducting professionally for 30. In addition to his work in Fairfax, he also conducts the Fargo-Moorhead Symphony Orchestra in North Dakota and the American Youth Philharmonic Orchestras, a program for D.C. area youth.

When discussing how to create a successful concert season, Zimmerman described a fairly delicate process that involves balancing the wants of older audiences while incorporating new composers doing interesting things.

“The biggest part of the audience is older people,” he said. “On the whole, they want you to program all the favorites — the big classical favorites — which is in the past era, of course.”

He continued, “But, in order to try and attract people who may not have been brought up listening to this stuff all the time … I try bringing pieces which are written more recently.”

“I think for someone who is not interested, who thinks they are not interested in this stuff, or have no kind of connection with this [music] … they would be more interested in hearing a piece written for orchestra by some cool dude that’s alive now rather than a guy who had a powdered wig on,” he said.

To Zimmerman, there are too many variables involved in filling venues to conclude that all orchestras need to do is program more contemporary pieces.

“Usually our marketing people [do] try and promote with youth in mind, like everybody else does, but you still don’t know what the result is going to be,” he said.

The FSO is not alone in this trend towards embracing contemporary material to diversify audience and attendance.

Orchestras across the country have been incorporating contemporary music into their repertoire. This year alone, The National Symphony Orchestra, New York Philharmonic, San Francisco Symphony and more will be incorporating works by 21st century composers into their seasons.

“I think that kind of programming is refreshing,” he said. “Symphony orchestras throughout the United States … all American professionals are searching for ways to make what they do more marketable.”

Camphouse also believes that contemporary composers deserve credit and can provide an exciting way to create a “different soundscape” for audiences.

When discussing generational interest in classical music, he believes that the way music is marketed is of the utmost importance. He said ensembles are tinkering with dress, interactive technology and other factors to reinvent and rebrand the experience of going to the orchestra.

Camphouse also mentioned that not all orchestra performers are enthusiastic about this move towards newer music.

“Many orchestral musicians today are conservative. Some welcome it, some do not,” he said.“I think they’re wrong.”

While some musicians may be hesitant to move towards newer music, Camphouse believes that they will follow the money. “Players will be more receptive … if it means their livelihood,” he said.

Senior classical voice major Bridgett Nestfield agrees with Camphouse’s stance. She has also seen the hesitancy from some older performers and teachers on pushing towards contemporary music.

“Historically, there’s this hyper focus on Germany … all things German are the best,” she said. “I don’t think any of this music is sacred one way or another. So, if they’re making money and they’re having a good time, that’s fine.”

“The Downton Abbey Era” was a clear example of true quality in entertainment. Zimmerman’s conducting was energetic, precise and jovial. The orchestra was immaculate and the soloist navigated through the music with ease and grace.

“The Downton Abbey Suite,” the composition taken directly from the series, stood out from the others. The piece was emotional, technically inventive and modern. It was also the most approachable score played by the ensemble.

Following the intermission, Zimmerman kindly thanked the audience for attending the concert instead of going to see the new movie and he recommended that they do it next weekend.

The audience for orchestra will not change overnight. It will take many more champions of contemporary music like Zimmerman, and many more concerts like “The Downton Abbey Era,” to inspire a new generation of classical listeners.