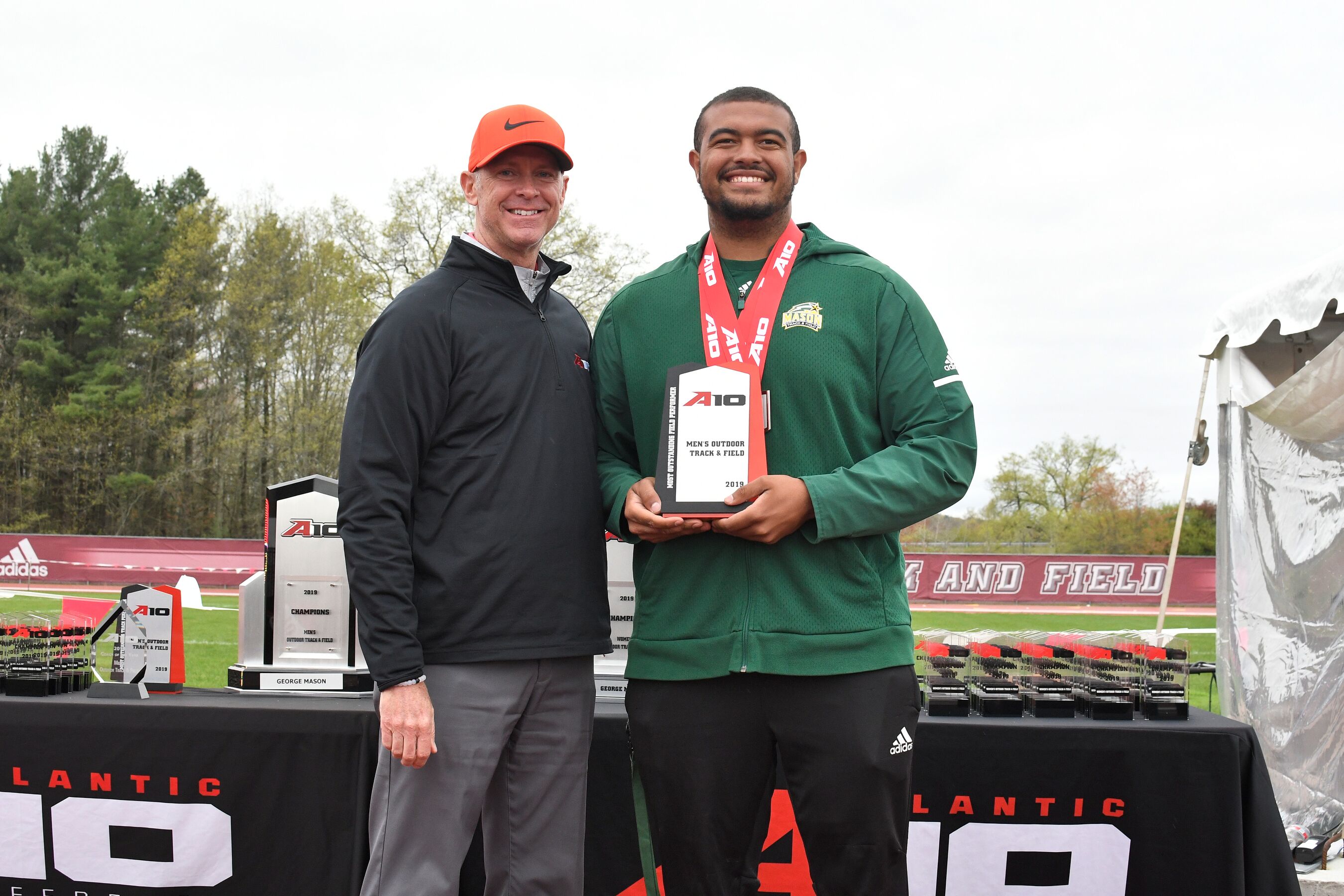 When assistant track and field coach Becky Hartley saw sophomore kinesiology major Jaylen Simmons compete for the first time, she knew she had to recruit him.

“I had my eye on Jaylen for a while,” she said. “Well, he’s obviously very athletically talented. He’s built like a thrower. All things being equal, good tall people usually beat good shorter people. He’s well built for the throws. He obviously enjoys throwing.”

Then her voice got a little softer. “He’s a nice guy. He’s intense, in a good way. I like the way he moved in high school. I thought, ‘He could learn how to throw hammer and weight.’”

And he did. At the 2019 Atlantic 10 Outdoor Track & Field Championships, Simmons set a new school record for the hammer with a distance of 52.38 meters. This is the first year that he has thrown hammer as well as weight throw.

His success helped Mason claim both the men’s and women’s titles for the second time in four years.

“It’s definitely been a challenge, because … it’s two new events,” Simmons said. “But that’s why I came to college, to compete and also do new things with my throwing events. I think it was just the opportunity to do something new, something different, and try to excel and learn how to help the team out, honestly.”

Simmons won fourth place in the hammer, which, combined with him earning first in shot put and second in discus, helped him to clinch the A-10 Men’s Most Outstanding Field Performer award. Before winning the award, he was also named an A-10 Outdoor Track & Field Performer of the Week three weeks a row in March and April.

Simmons is no stranger to winning. When he was a senior attending Waynesboro High School, he went all the way to states and placed in both shot put and discus, coming in second and first respectively.

“The thing is, my mindset is just to compete,” Simmons said. “It’s another competition; just go forward. If you’re in your head for track and field, you’re not going to perform well, because it’s just an individual sport until you need that whole team-scoring system [to] come in.

“So it’s just focusing on what I do personally and everything. It’s just [about] focus and being diligent about the time that you have when you’re training, and then just do that training during the competition, and then trust your body at the very end of the day.”

Even though the sport that Simmons competes in is more individual-oriented, he used to be a part of several team sports. Growing up, he played sports year-round. In the fall, it was football, while basketball kept him in condition for the next season. Track was “the lull in-between.” 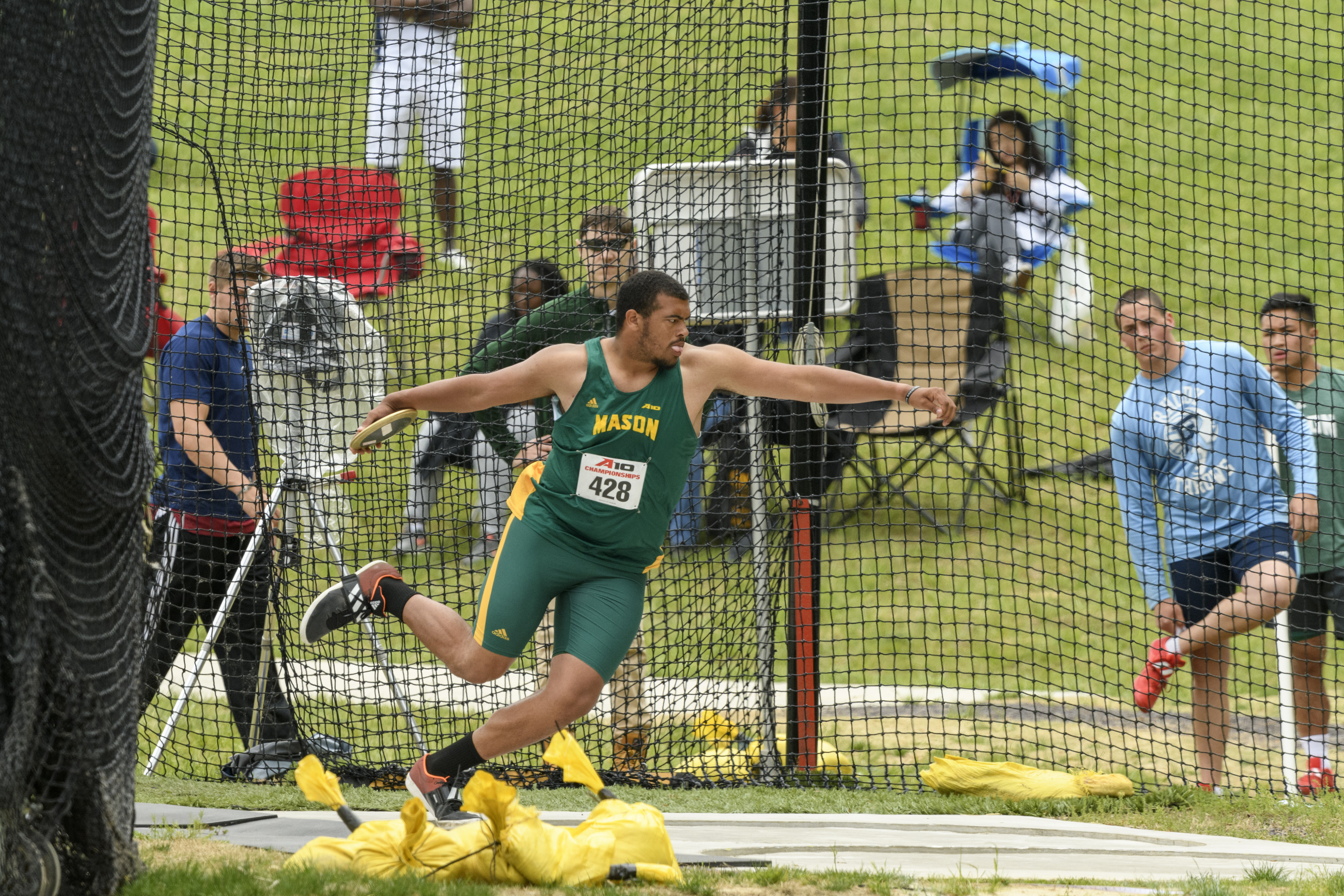 Though he participated in all three sports in high school, the time came for him to choose what he wanted to play in college. Simmons knew that he wanted to focus on his track and field career.

“It was really hard to decide between football and track, because … I played football since I was 5, so … growing up, watching it, just breaking down everything, it’s still huge,” Simmons said.

“So it was hard to choose between the two. But also, I excelled way better at track and field. … For football, I’d have to grow another inch [and] a half and then also have to gain another 30, 40 pounds of muscle, which you have to do for track and field, too, but it’s a different kind of muscle that you gain. And it’s less demanding on your body for track and field.”

Since coming into the program last year as a freshman, Simmons has continued to grow.

In shot put at the A-10 championships, he threw his most consistent series of the season, with all throws going more than 17 meters. At the end of last season, Simmons’ farthest throws were 15.14 meters for shot put and 46.92 meters for discus. At the A-10 championships, he broke his personal record in discus by 40 centimeters, hitting 49.86 meters, and in shot put by 23 centimeters, hitting 17.45 meters—increases of more than two meters in each. Simmons has been striving toward that progress since he started.

“So it’s an intense training regiment, for sure. But it’s the training regiment, honestly, it’s how I prepare for it. So the summers are the most important, ’cause people will think … ‘Yeah, you have time off,’ but in reality, track and field is a year-round sport,” he said.

After college, Simmons wants to become an athletic trainer. When he sustained an injury back in high school, he had to see an athletic trainer and attend physical therapy daily in order for it to heal properly. He realized that he wanted to do the same for another student-athlete one day, to help them re-enter their sport stronger than they left it.

There is one goal, however, that he wants to accomplish on the track and field team before he leaves college.

“Eventually, I don’t know whether it will be this year …  it would be a big request for him to throw far enough this year to qualify for nationals, but I think both he and I have that on his goal list for his career at Mason,” Hartley said.

She continued, “I can tell when they come back from [their] freshman summer who really embraced the training, and he did, clearly. And that set him up for a good year. Here’s hoping he does it again this summer. I think he’s motivated.”