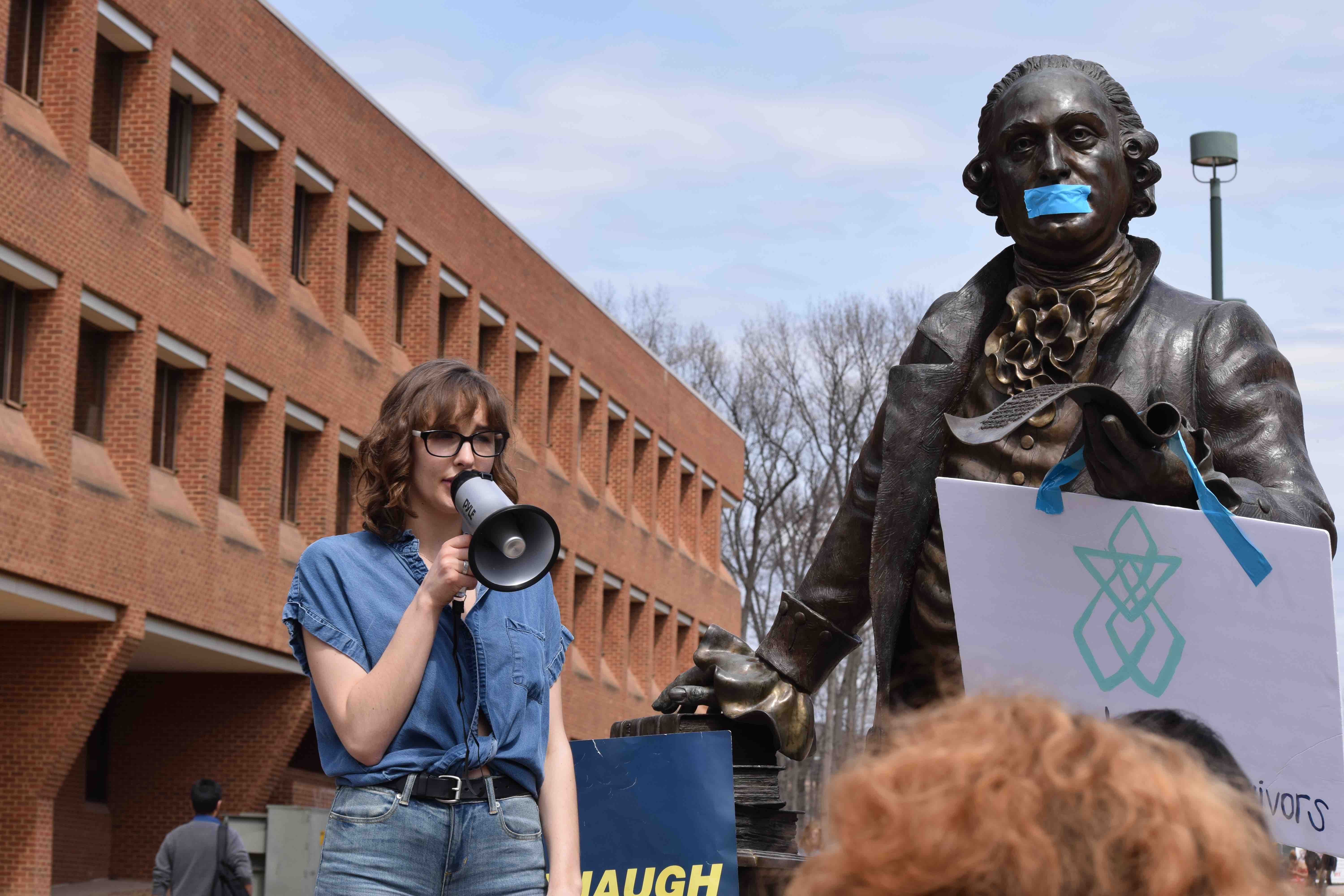 A group of Mason students congregated in front of the Mason statue Thursday, April 4. Journalists and camerapeople surrounded them, reporting on the the scene.

Teal tape covered the statue’s mouth in honor of Sexual Assault Awareness Month. Student leaders of the new activist group Mason for Survivors stood on the base of the statue with megaphones. This event was a part of their second teach-in regarding Supreme Court Justice Brett Kavanaugh and Mason’s Title IX office.

Mason for Survivors is concerned with Title IX reform, sexual assault awareness and, more specifically, the preemptive removal of Kavanaugh as a professor at Mason.

Elijah Nichols, one of Mason for Survivors’ founding members and press co-lead, described learning about Kavanaugh being hired as an awakening.

“The day after the Kavanaugh announcement, I realized that, as a survivor, there are a lot of issues on campus,” Nichols said. “It sort of brought everything to my attention.” 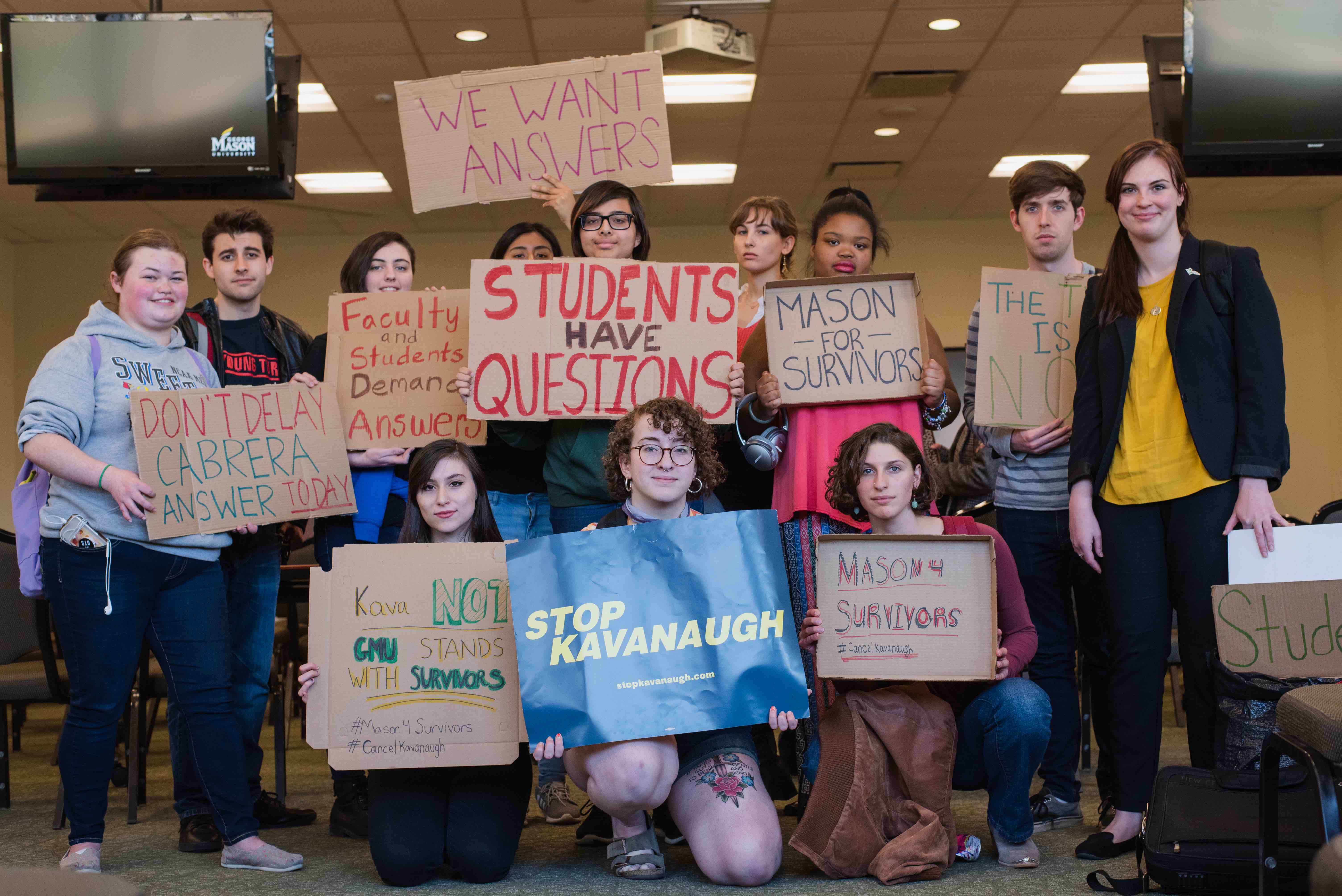 Nichols continued, “I had been living in this sort of bubble, like, ‘Oh, things are fine at Mason.’ … But I think it’s much more deep-seated than a lot [of] people would like to admit. I think when the 60 students came together after my Facebook post, it really showed me that people are angry about this, and students want to see a change.”

The night after Fourth Estate broke the news of Kavanaugh being hired as a visiting professor at Mason’s Antonin Scalia Law School, Nichols and 60 other Mason students came together to discuss how everyone was feeling in the wake of this news, and what could be done to get their voices heard.

“It felt really comforting, as a survivor, to know that there [is] a community of people here at Mason that are willing to step up to the plate and do what needs to be done,” Nichols explained in regard to the original meeting shortly after the story broke.

Marian Almanza, another member of Mason for Survivors, talked about why she joined the organization so quickly after the news of Kavanaugh’s hiring.

“I remember when the article came out. I remember reading it and feeling this wave of emotions. At first it was anger, then there was some fear, and then anger again. I just felt very dismissed.”

Sara Deriso, another founding member of the organization, expressed a similar sentiment of frustration with Mason.

Deriso serves as a representative of Mason for Survivors who organizes meetings between students and faculty, professors and administrators in order to discuss the organization’s list of demands.

The core team of Mason for Survivors drafted their six-part list of demands within the founding days of the organization. The first calls for Mason to remove all affiliation and nullify all contracts with Kavanaugh and release all documentation related to his employment at Mason.

Though this student organization is just getting started, some demands on their list are already in the process of being met.

However, Nichols explained that four is not enough to proportionally serve Mason students. According to a spreadsheet created by Mason for Survivors, Mason currently ranks 14th out of 15 public universities in Virginia in terms of Title IX representation.

Additionally, Mason for Survivors has asked for Mason’s administration and President Cabrera to hold a town hall to discuss Kavanaugh’s hiring and how it will affect students on campus. Nichols also has sponsored a bill in Student Senate requesting such a meeting.

Mason for Survivors is currently planning a town hall event in an effort to hear from both Mason students and Mason’s administration. Though the working date for the town hall is April 16, it is unclear what action Cabrera will take at the event.

Nichols recalled a conversation with Cabrera that gave him hope that they would accomplish this event. “I walked up to [Cabrera] when he was at lunch in the JC,” he stated. “I told him a little about my story, also about how students are very upset. But I thanked him for agreeing to do the town hall.”

Nichols continued, “He assured me that [sexual-assault prevention] was at the top of his priorities, which, it doesn’t always seem like that’s the case, but we have to take it at face value.” 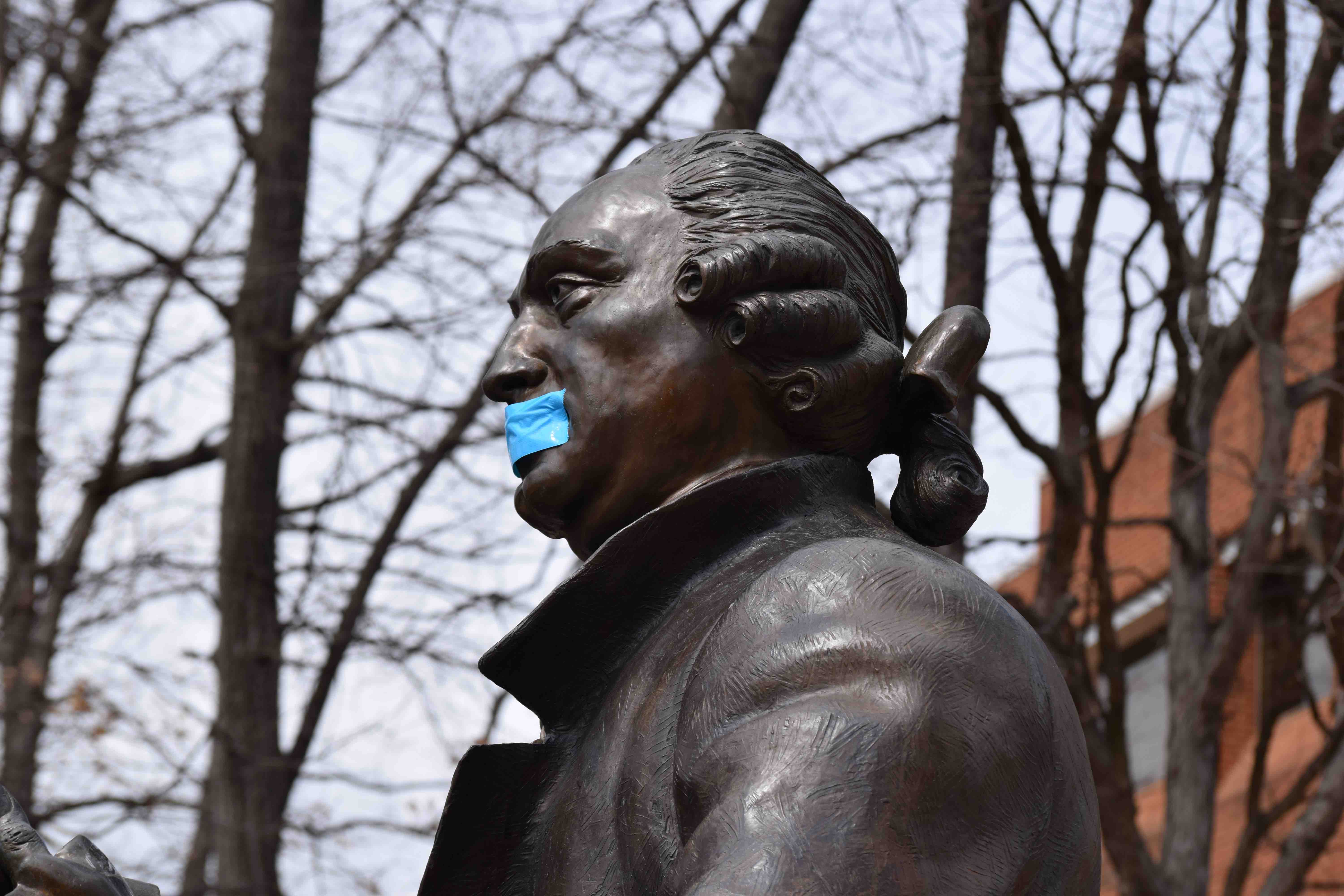 Mason for Survivors is made up of primarily undergraduate students who take classes on Mason’s Fairfax campus, but the organization is working to educate graduate and law students on the Arlington campus about Kavanaugh’s hiring and what it means for Mason students.

William Jeanette, a first-year graduate student on Mason’s Arlington campus, is an active member of Mason for Survivors.

“I feel like Kavanaugh was a lens put in front of an already-existing anger,” he said in regard to on Kavanaugh working for Mason’s law school.

Jeanette serves Mason for Survivors as a point of contact for graduate students.

“I just feel like not as many grad students in Arlington are aware of Mason’s past with [sexual assault],” Jeanette explained.

Because of this perceived lack of awareness, Mason for Survivors is planning to host events on the Arlington campus to educate more students at the law- and graduate-school level. Nichols explained that the event will not be like the previous teach-ins, but it will allow Mason’s graduate students to address and discuss their concerns about Kavanaugh’s hiring.