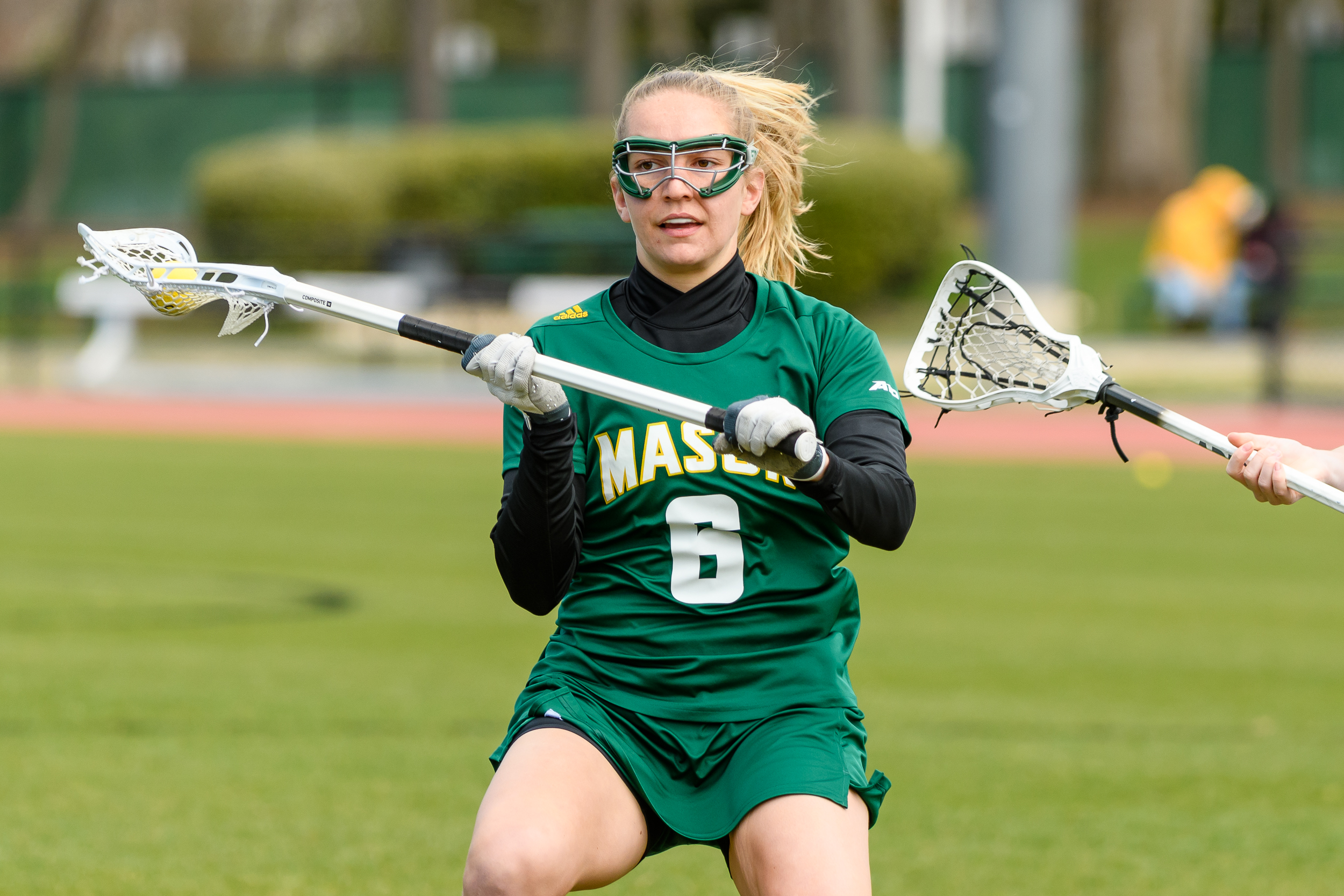 Listening to Chachi Kelehan speak about lacrosse and the women’s team here at Mason, one can immediately tell that she knows what it means to be a team player. Kelehan is friendly and clearly passionate about both lacrosse and her teammates.

Now a senior at Mason, Kelehan has played lacrosse since she was 5 years old. Her parents threw her into every sport they could, and though she loved them all, lacrosse ended up being her favorite.

Her love for lacrosse—and the fact that Kelehan thirsts for competition—clearly translates into her drive to do well.

“Competition is probably why I love it so much, but a close second is definitely having teammates and friends,” Kelehan said.

Her journey to Mason was an interesting one. After tearing her ACL her freshman year of high school, Kelehan decided to commit to Old Dominion in order to have a place to play lacrosse in college.

Once her injury healed, her high school coach came to Mason to be an assistant coach and told Kelehan to see if she liked the program. “I decommitted from Old Dominion and committed to Mason, and it’s been the best decision I made,” Kelehan said.

Not only does she have the skills of a true team player down, she has the grit to get things done. “What I always tell myself when I think I can’t finish something is … one, I’m going to eat dinner tonight—which is what gets me through the runs—and two, tomorrow is a new day,” Kelehan explained. “It will get easier. … [Try] to stick with it and lean on your teammates.” 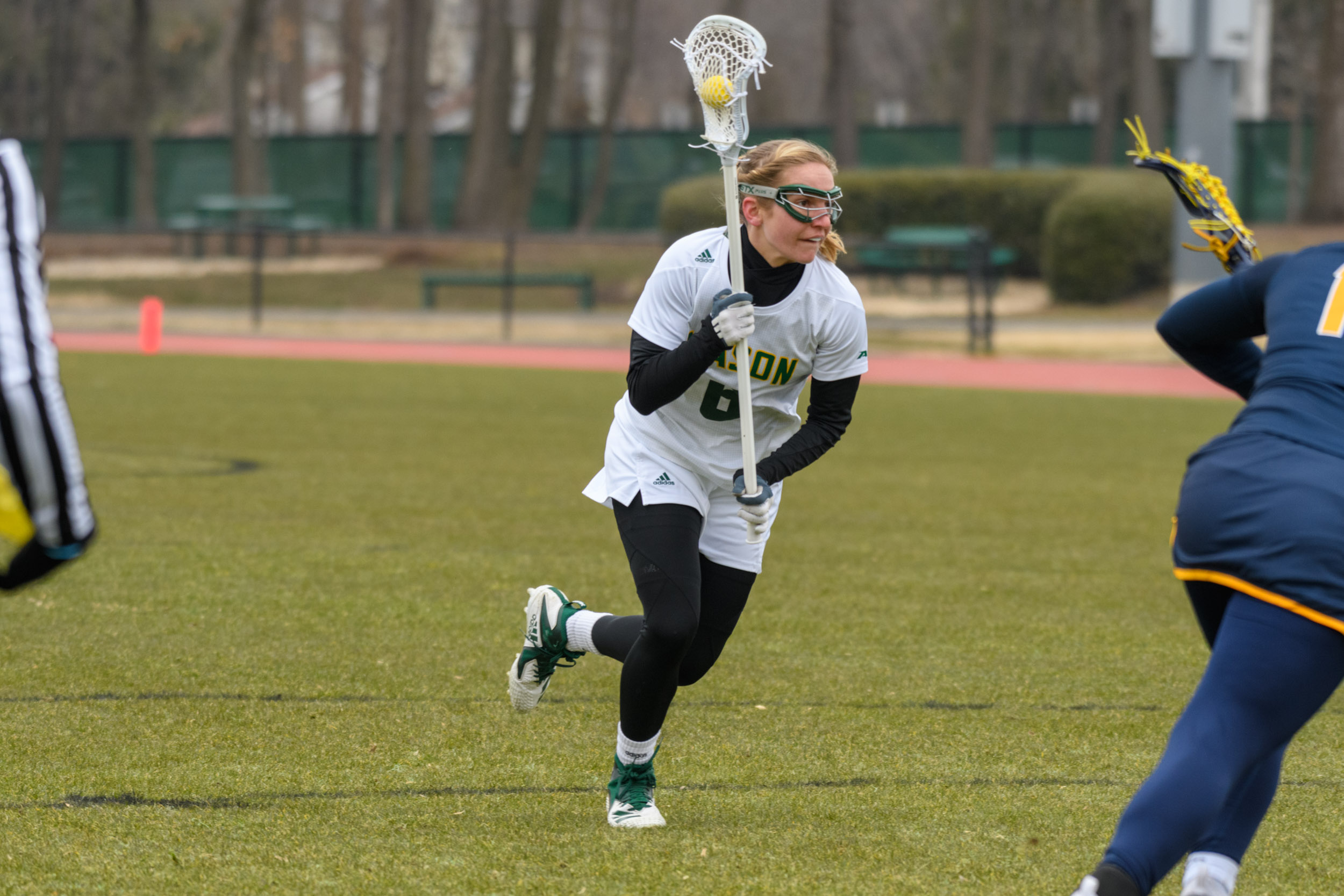 Kelehan’s dedicated work ethic not only comes from her own determination, but also from the inspiration she has found in others who work as hard as her. In her freshman season, Kelehan leaned on her teammates, one in particular, “She would always be like, ‘Nope. We’re not going to stress about it. We’re going to get through this together as a team, and then we’re going to go to bed and wake up and do it again tomorrow.’” This mentality has been paramount throughout Kelehan’s career as a student-athlete.

Kelehan also praised her coach, Jessy Morgan, for the work she does to keep the team chemistry alive and have them continue to push themselves even when things get tough. “She really pushes us to cheer for each other and support each other when it’s hard and not just focus on ourselves, which is really, really good,” Kelehan said.

“If it gets hard and you think about yourself, you may not play very well, but if you think about playing for your teammates, it’s a whole different kind of game. It’s awesome.”

This determination and togetherness of the team is what led to Kelehan breaking all sorts of records.

“A personal goal that I have is to have more assists this year than I did last year,” Kelehan said. “I think that’s a big part of the team succeeding, is having more assists, rather than just having one person driving all the time and taking it to goal.”

Though Kelehan has made the most out of her college experience, she looks forward to the future. “I’m very sad that I’ll be leaving,” she said regarding her graduation this May.

“I don’t know what I’ll do with all my free time, but what I’m looking forward to after lacrosse is going to nursing school and trying to reach those goals academically rather than athletically,” she said.

As hard as it may be, being a student-athlete has allowed for Kelehan to work on different skills to further her academic success. “It’s built a self-clock for me,” she said. “It’s really helped me organize [things] and have a lot of time management, which I don’t think I would have if I didn’t play a sport.”

It’s clear that Kelehan will be missed at Mason as much as she will miss it. With how deeply she genuinely cares about the sport and the people she plays it with, it’s clear she’s been an asset to the Women’s Lacrosse team these past four years.