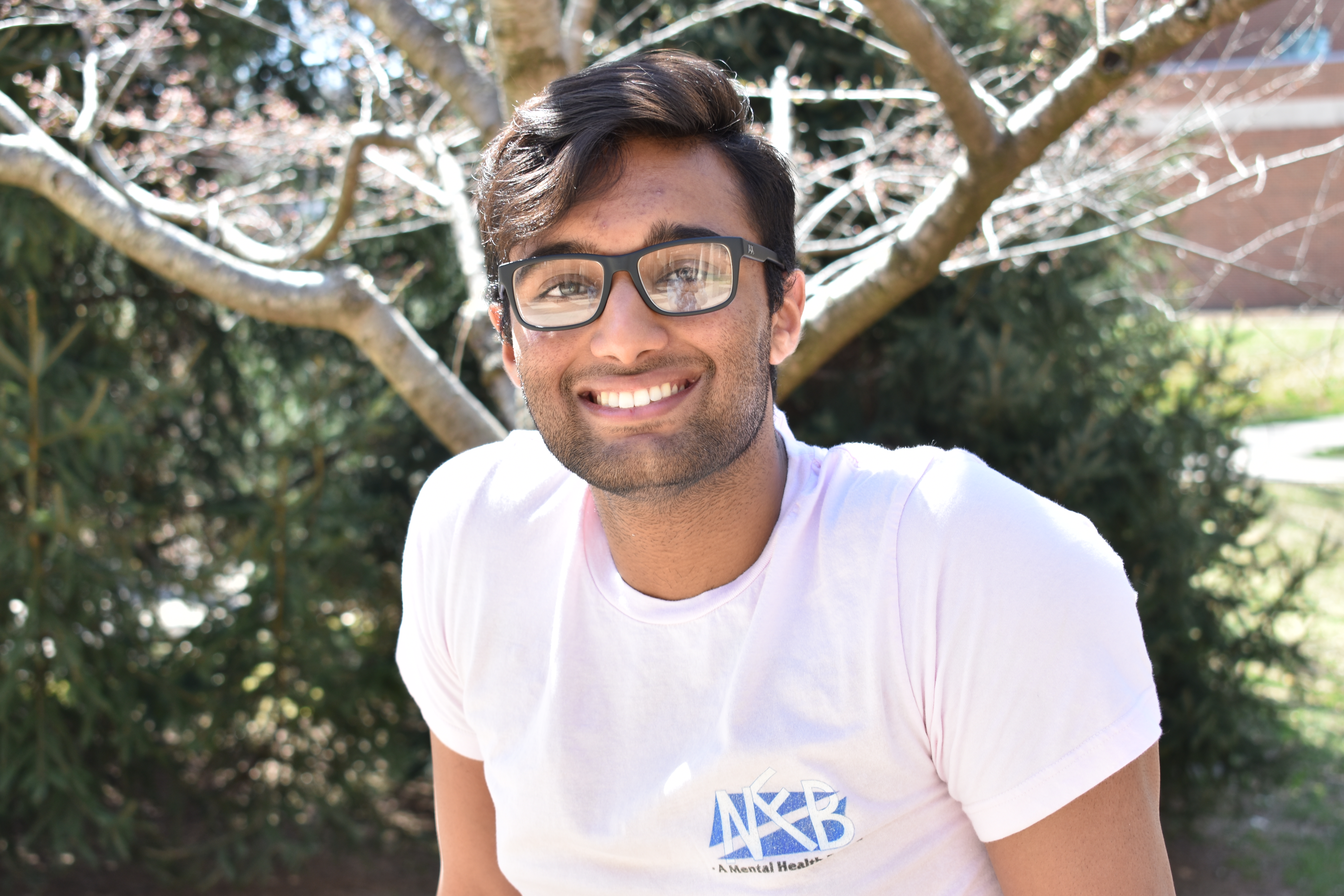 Naravulu’s passion for mental health is personal. “A lot of people around me have suffered from poor mental health and haven’t really gotten the help that they deserve. They haven’t been able to talk to the people that they should be talking to, whether that’s a family member or a support group member or even a therapist,” he said. “So I started the brand to open yet another conversation about mental health. There’s a lot of activists out there, and I wanted to do something that was unique and different, and I wanted to encourage it through fashion, because everybody talks about fashion.”

Naravulu first got the idea for Never Felt Better in 2018 after a joke with one of his fraternity brothers. “It wasn’t even [called] Never Felt Better in the beginning,” he said. “It started off as No Frat Bros as a joke, because we’re like the least [frat-like] guys ever. We were going to make some shirts together, and in the end, he ended up not really committing to it, but I kept going with it, and I was like, ‘Well maybe I can make this bigger than a joke. I can actually help people with it,’ because mental health is super important to me.”

Never Felt Better consists of a collection of long-sleeve and short-sleeve T-shirts ranging from $20 to $50, including a premium line of shirts made with French terry cotton. The shirts feature a variety of graphics, such as the “I Love You Rose” design, which has a graphic of a hand with the American Sign Language symbol for “I love you.”

Naravulu explained that he tries to make sure that each design has a meaning. “I always try to put a message behind them, because I want there to be an overall message of the brand and how it supports mental health and your individual journey to discover what works for your mental health,” he said.

He explained that the “Koi Bois” design, which shows a graphic of two koi fish around the Never Felt Better initials, is “about strength and perseverance, because that’s what they signify in a lot of different cultures.”

The “Drowned Beauty” design, which features a mirrored graphic of a tree, “is supposed to signify [that] even if you’re struggling, even if there’s a lot of things going on in your life [or] if you’re ‘drowning,’ you’re still beautiful,” he said. “Your mind is still beautiful … Please don’t give up on yourself.”

Not all of Naravulu’s designs have a deeper message, such as the “Pineapple Frapple” design, which he said is “just cute.” He also created the “Anti Sad Boi Sad Boi Club” design as a play on the Anti Social Social Club logo.

“I’ve tried my best not to keep everything super on-the-nose, like, ‘You can do it,’” Naravulu said. “If I wanted to do that, I would just buy a shirt from Nike, or I would buy another shirt from another brand, or like Reebok that has all those pretty sayings with an arrow through it. I wanted to actually contribute.”

In addition to the designs, which Naravulu creates himself, he also thinks that his brand is unique because of the way that it supports mental health by donating 5 percent of the profits to the organization Mental Health America. He explained that the rest of the profits “[go] back into the business so that I can make better things.”

Naravulu was drawn to Mental Health America because its services are geared toward all age groups. “There’s a lot of other different organizations that are more just focused on preteens and teens up until college or even in college,” he said. “People in their 30s, 40s, 50s, they also suffer from anxiety, depression, other mental-health-related issues. So, to get the help that they need, they need a facility that can help them, and Mental Health America does that.”

Being a college student is hard enough without the added pressure of running a business. To find the balance, Naravulu tries to work on the brand whenever he has free time.

Still, Naravulu knows firsthand how difficult running a business can be. “It’s not easy. If it was easier, I know somebody else would have done it … because I know a lot of other people are super passionate about mental health,” he said. “But it’s completely worth it. The same feeling that somebody gets when playing a video game, or going out and partying with friends, or [going to the] movies or whatever, that’s the feeling that I get when I’m working on the brand. It doesn’t even matter what I’m doing.”

Naravulu is appreciative of the support that Never Felt Better has received so far. He said, “In the beginning, I told a couple of people about the idea of the brand, and you know how when you tell some people an idea and they’re like, ‘That’s not really going to work, because here’s why,’ and they try to shoot it down? Every single person that I talked to was supportive of it.”

Some of Never Felt Better’s biggest supporters have been fellow Mason students. Naravulu’s friends and girlfriend  modeled the shirts, which helped bring awareness of the brand to students on campus. When Naravulu sees students he does not know wearing his shirts, he likes to go up to them and ask them about the brand.

“I tell them that I’m just interested in the brand and they’re like, ‘Yeah, it’s about mental health,’ he said. “That’s the first thing they say, not ‘it’s a really cool brand; they have cool designs,’ because I know that I can get better with the designs. But I’m still proud of the designs. But yeah, it’s nice to see Mason students wear them.”

He also hopes to expand the line to include other products, such as jogger pants, and to be able to donate more to Mental Health America. Naravulu’s main goal is to continue to emphasize the importance of taking care of one’s mental health.

“It really is just about making sure that the community is OK,” he said. “I just want people to know that their mental health is just as important as their physical health. Going for broke all the time, grinding all the time, just because you think you have to do that, is not healthy for you. Take a personal day. Seek help if you need it.”

Writing Across the Beauty Media