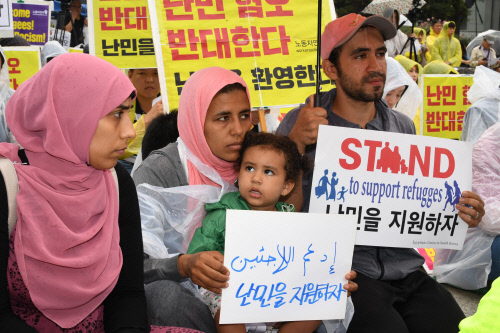 On Feb. 28, the ‘Refugee Around Us’ forum was held at the national assembly library with three guests including Woosung Jung, a UNHCR National Goodwill Ambassador. During the forum, one of the audience members asked a question about why South Korea has to be open-minded in safeguarding asylum-seekers or refugees. Some people argue that the contributors for the emergence of refugees are mostly located in Europe, so they believe that Korea has no reason to help them.

The answer to this, however, relies on the United Nations 1951 Refugee Convention, which is the foundation of international refugee law and its 1967 Protocol Relating to the Status of Refugees. These treaties are based on the principle of non-refoulment, meaning that the host countries have no authority to expel refugees to the territory where their freedoms are endangered. In addition, since they are customary international laws, the rules are also applied to nations that haven’t acceded the 1951 Convention. Therefore, they have no right to compel the asylum-seeker to go back to their own country. The total number of States that ratified the documents is 145 (The 1951 Convention) and 146 (1967 Protocol) nations, including the Republic of Korea which consented on Dec. 3, 1992.

Even though the 1951 Convention and its 1967 Protocol has been approved from South Korea for a long time, Korean society seems to overlook those facts and protest to ban the influx of refugees into Korea. Many analysts have believed that these kinds of issues were motivated from the media that informed the public about numerous terror acts carried out by refugees. This leads Korean citizens to have a solid stereotype about refugees in a negative way—Islamophobia and misconceptions of refugees as migrants who come to seek economic privileges are some of the negative beliefs. In order to eliminate this prejudice against refugees, “Refugee Around Us” forum guest speaker Eil Lee mentioned the efforts of governments or parliamentarians are first and foremost required to alter civic consciousness of refugees.

There are still refugees suffering from war and seeking protection to escape from different types of persecutions. According to UNHCR, South Korea only take the responsibility of accepting refugees 3.5 percent, which is a number that is below the international standard, 24.8 percent. Korea has a legal obligation as a member of the 1951 Convention and its 1967 Protocol, it is significant to put more effort on supporting refugees like refugee resettlement which is a program that UNHCR’s suggested refugee resettlement solution.