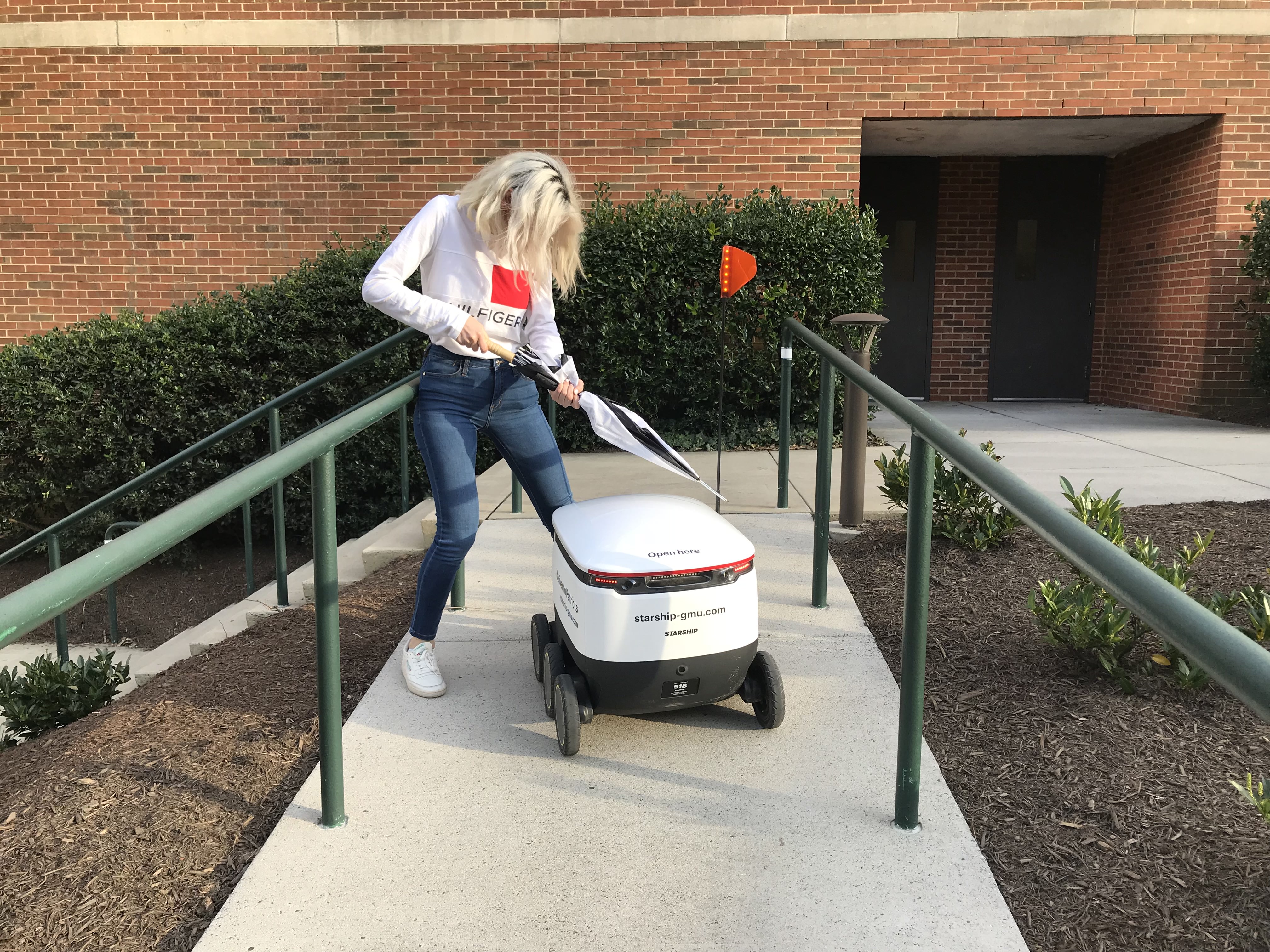 “It just wanted to have a beep-boop day”

In a manner that showed how professional, incredible and amazing Mason students are, Tuesday, March 28, a student was found in a state of intoxication close to one of the dining halls beating a delivery robot half to death.

The student has not been identified yet, but is thought to have been a rude, ugly man. He appeared to be privileged, and no charges are expected to be brought against him when he is found. The student body reacted with disappointment but not surprise.

“We were just doing our jobs,” reported a delivery robot that witnessed the horrid act.  “We were going around, delivering Starbucks to those who ordered it and wishing everyone a very beep-boop day.”

The incident occurred in front of Southside and Skyline, an area that is constantly crowded now due to the construction happening in front of it. As the robots made their way with their many deliveries, stopping to ram students walking by in order to show their love and appreciation, a very loud and rowdy group of Mason students passed.

“I was very surprised to see so many students,” the robot continued. “The lighting is so bad around here, anyone can jump out and attack us without being discovered.”

Despite feeling apprehensive about the situation, the robots decided to ram the students anyway. When the now-smashed robot got close to the group, one of the members grabbed him by the hinge.

“He picked it straight off the ground, the annoying little creep,” a member of the group who wished not to be identified said to Fourth Estate. The member, who will be referred to as YIKES for the rest of this story, confirmed that the group was very, very, very, very, very drunk at the time of the incident.

After picking up the robot, the student dropped it to the ground, breaking part of its exterior. The robot let out a loud “BEEP” in response. Another robot tried to roll away and get help for its poor pal but was distracted by one of the people in the group, who deliberately stepped into its path screaming, “PIZZA PIZZA” and attempting to break open the area where it holds food.

At this point, the student who dropped the robot grabbed a bat that presumably had been left by the construction company and started beating the robot repeatedly, over and over, again and again.

“They mercilessly beat the s— out of it,” the robot commented. “It looked like it hurt so much. He just wouldn’t stop. Wires were coming out of it every which way, and it just sounded so scared and kept saying, ‘Beep’ and ‘Have a nice day!’ until it just couldn’t anymore.”

Members of Student Government were the ones to inadvertently break it up.

YIKES said that they were arguing rather loudly about whether a hot dog is a sandwich. When the group noticed the robots, they stumbled away slowly, but the students were so heated that they did not notice them or the fallen robot. (Student Government did not respond to requests for comment, only stating, “We were figuring out the sandwich situation one topping at a time.”)

The robot bystander said that it only wanted justice for its friend.

“It did nothing wrong,” it said. “It only wanted to have a fun time, but it got destroyed, instead. It came to have a good time, and instead felt so attacked. Literally. Attacked.”

Editor’s Note: This is a developing story. We expect a call from Michael Sandler expressing his immense displeasure sometime in the near future.