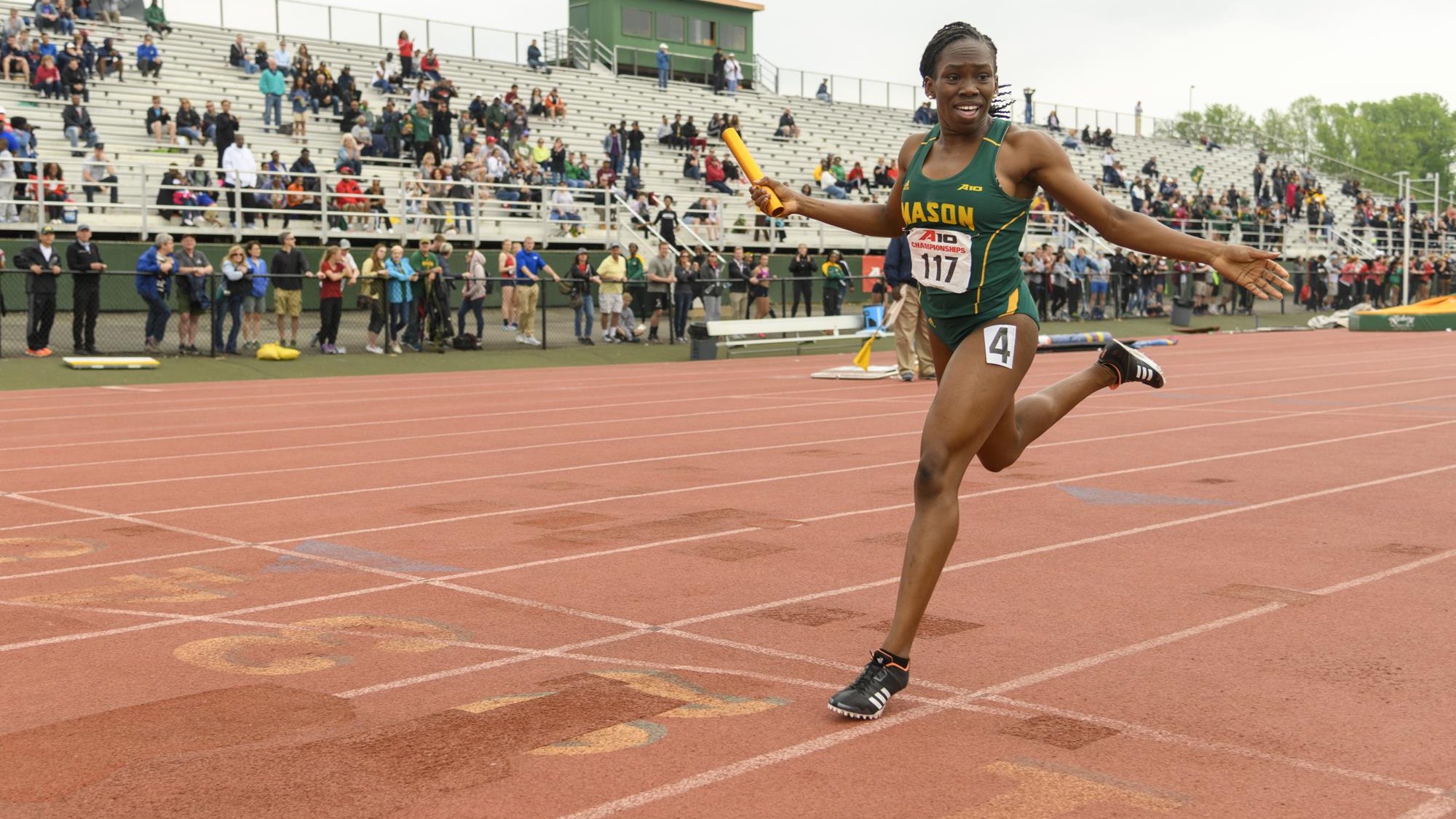 For senior Sarah Moore, track and field has been a guiding light. Starting her career early on as a freshman at James Hubert Blake High School, Moore has grown from a distance runner to a sprinter in a matter of a few short years.

After carefully weighing both academic and track and field programs, Moore decided that bringing her talents to Mason would be nothing less than the correct choice.

Moore said, “Mason was always my number one. I actually had a weird visit because I came to Mason [from Maryland] on the Metro and was only here for a few hours, but I thought it was such a beautiful school, and the coach at the time just made me think, ‘Wow, this is amazing.’”

Unlike many other sports, track and field is both a team and individual sport. “People get really nervous and doubt their abilities,” Moore stated. “I think I have a lot of control [so that I can] just run.

Positive self-talk helps Moore after every practice and meet, knowing that she is her own competition. Her personal record is for her own self-assessment, allowing Moore to be accountable for her success as well as pushing her to do better on the track.

However, positive self-talk is not the only aspect that keeps Moore at her prime. “Taking care of myself [is] a huge obstacle,” she said. “[You] have to eat well, get enough sleep, manage your time well, go to class and do your work, and just making everything work.”

Even though Moore expressed how self-care can be difficult, especially in a college setting, she also emphasized how critical it is to maintain stability as a student, athlete and a combination of the two.

Furthermore, as a student-athlete, “being able to experience so many different environments [has enabled me] to travel quite a bit.”

Moore said that her favorite place the team has traveled to was Eugene, Oregon, because “there’s so much nature. I always knew [of] its beauty, but beauty is an understatement.” Moore also stated that without being an athlete, she never would have been able to visit such eye-opening places around the United States.

Additionally, some of the other opportunities that track and field has made available to Moore include participating in the 2015 AAU Junior Olympics. Running as part of a 4×400, Moore said that the dynamic of track became competitive fun instead of solely fun at the competition.

That same competitiveness extends into Moore’s nature as a sprinter. In the 2017 outdoor track season alone, Moore established numerous personal records and was awarded two gold medals for the 400-meter and 4×4 relay at the Atlantic 10 Championships, including a bronze medal for the 200-meter.

In addition to her list of 2017 accolades, the rest of Moore’s achievements are excellent examples for the impact that she has had on the team while at Mason. As she exceeds expectations on the track, Moore said that she would have loved to try out the field portion as well.

Approaching her last semester as a student-athlete come spring, Moore expanded upon how the other women on distance and sprints are more than just teammates to her. Moore said that when a team builds meaningful relationships, your team dynamic works better. You also get more of a family dynamic geared toward support on and off the track.

On a deeper level, track and field has given Moore more than what she could have ever asked for. “I should actually write [it all] down one day,” she said.

“You have to be on time,” Moore said about her success. “As weird as it sounds … if an event starts at 11:42, they will start with or without you. Hard work pays off. It really is just you because you are your most real opponent.”

She went on to say, “Some things aren’t a big deal. In high school, a bad race could ruin my day, but now I know that it won’t be last 400 I will ever run. Don’t make excuses; like if I ran slow, it’s because of me and not because my shoe was untied or anything else.”

Moore was asked who she considered to be her biggest supporter. After some contemplation, she responded, “The Mason Nation.” Adding to her response, Moore said that, “When I qualified for nationals, it was completely unexpected, and I was still in shock, but everyone was supportive and proud.”

What touched Moore was the fact that people in the Mason community intentionally turned on their televisions and picked up their phones to watch her on ESPN. Moore said, “I really should’ve turned my phone off, because it was going off the entire day.”

Moore, in the near future, aspires to compete in the World Championships in 2019, hosted in Doha, Qatar. Moore said, “I just want to run as long as I can.”