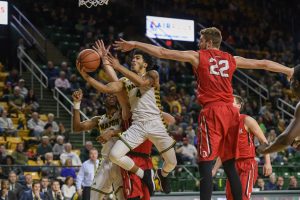 The nonconference schedule that awaits the Patriots this year is one of the hardest-hitting schedules Mason has had to face in its time in the Atlantic 10 under head coach Dave Paulsen.

Out of the 13 scheduled opponents, eight recorded 19 wins last season, and five qualified for post-season play. However, if the Patriots play Baylor University in one of their in-season tournaments, those numbers will increase to nine and six respectively. Mason will play the winner of Baylor and the University of Mississippi in the Emerald Coast Classic over Thanksgiving break.

This is a schedule that includes Kansas State, who fell to the Cinderella team Loyola University Chicago last year, and three other NCAA Division I Men’s Basketball Tournament teams from last year.

After winning four fewer games last season than they did in 2016-2017, the Patriots look to move forward.

The Vermont Catamounts posted a 56-14 overall record over the past two seasons and have won more than 20 games in 17 of the last 20 seasons, including each of the last 10 seasons. This includes a 31-1 record against America East opponents.

The Catamounts won the America East regular-season title in 2018 and qualified for the NIT after falling to the University of Maryland Baltimore County in the America East Championship. The NCAA committee gave an at-large bid to Vermont for the 2017 NCAA Tournament.

In order to strengthen their chances for an NCAA Tournament bid, the Patriots will have to win at least 1 game against the three Power 5 opponents on their schedule. These include the University of Cincinnati, Baylor/Ole Miss and Kansas State.

After winning the 2018 American Athletic Conference regular season title as well as the tournament titles, Cincinnati advanced to the NCAA Tournament as one of the No. 2 seeds. The Bearcats then fell in the Round of 32 to the University of  Nevada, who eventually advanced to the Elite Eight.

Winning 20 or more games in nine of the last 12 seasons, Ole Miss reached the NCAA Tournament in both 2013 and 2015. The Patriots played Ole Miss during Paulsen’s first year as head coach in 2015, winning by a score of  68-62 in the opening game of the Charleston Classic.

Paulsen wants to show the NCAA committee that, if Mason wins the majority of their games, they should be in contention for an NCAA Tournament bid.