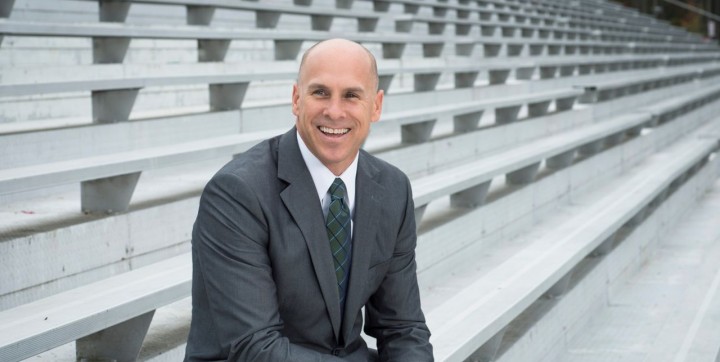 On Sept. 19, George Mason Athletics announced that Athletic Director Brad Edwards would be receiving a five-year contract extension through the 2022-2023 season and a salary increase of nearly $50,000.

Despite coming to Mason in the summer of 2014, Edwards has already left his mark on Mason’s campus and the athletics department itself.

During his five years here, Edwards has raised $20 million in revenue, sponsorships, and partnerships. EagleBank Arena is the most notable of these in two aspects — the naming rights purchased to the building itself and the addition to the new center-court jumbotron and the newly renovated locker rooms.

A little more than a year after coming to Mason, Mason Athletics partnered with Adidas. The partnership is worth approximately $2 million in both apparel and equipment.

Prior to the start of the 2017-2018 basketball season a new scoreboard with video capabilities was installed in EagleBank Arena, enhancing the in-game environment for fans. This came as a direct result of Edwards’ negotiation of a five-year extension with Learfield, the exclusive corporate sponsorship partner and multimedia rights holder of Mason Athletics.

Edwards received a record number of gifts from the Patriot Club totalling over $5.8 million.

Mason Athletics also partnered with Vivature, a software company, to use their athletics training software and billing solutions worth $1,050,000.

Phase 1 of the Excellence Plan was worth $2.2 million, and included renovations of the EagleBank Arena locker rooms, the renovations for the Cage Gym Practice Facility and the new center-court jumbotron.

Phase 2 includes the design and construction of an addition to the Cage Gym Practice Facility. This will include adding new offices for the coaching staffs, new practice facility locker rooms, and sports medicine performance areas.

With a salary increase of 17 percent, Edwards now makes a little more than $350,000 annually. How does his salary compare to similar schools in the Atlantic 10 Conference?

Mason is one of four public universities in the conference, including the University of Massachusetts-Amherst, University of Rhode Island and Virginia Commonwealth University.

In order to compare in a more accurate way, it is necessary to designate which schools in the A10 are football schools. Furthermore, because ten of the 14 schools are private, the salary data for those universities are unavailable.

Tenure does not seem to play a role in the salaries of these Athletic Directors. Bjorn, who started at URI in 2007 and was named one of the Under Armour ADs of the Year in 2016, makes over $100,000 less than McLaughlin, who was hired five years after Bjorn.

Edwards looks to continue the trajectory of the athletics department and also continue to help student-athletes succeed in both in the classroom and in their sport.

Break into the Indie Filmmaking World

Why We Should Care About Student Government