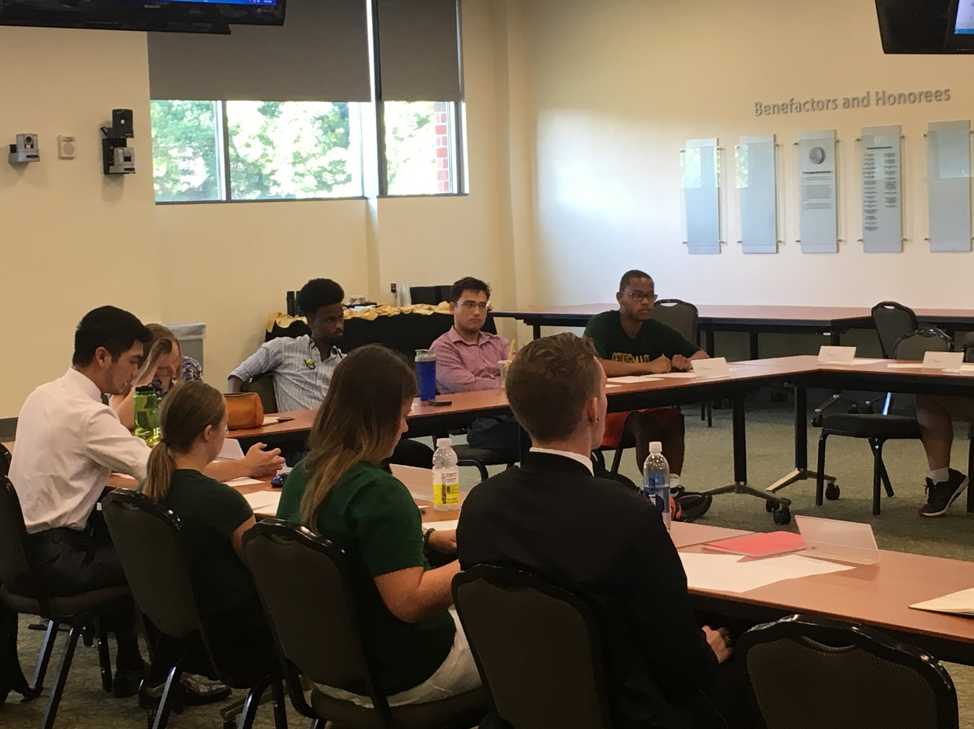 Concern over the allocation of funds to assist Mason Veteran Patriots

The fourth meeting of the 39th Student Senate took place last Thursday. The meeting was headed by the new speaker, Davide Genoese-Zerbi, and President Bekah Pettine.

Genoese-Zerbi and Pettine discussed executive appointments and confirmations as well as two bills and a resignation from the head of Diversity and Multicultural Affairs, Senator Madison Essig. There was also a dispute over the ratification of appointments.

President Bekah Pettine started the meeting by announcing the confirmation of the new Executive Chief of Staff, Adanna Newby.

“Adanna has been in Student Government for over a year now, and she’s worked really hard in [public relations]. [Vice President Eric Truong] and I had a real meeting…and this is something we have been discussing since the summer, and there’s nobody else we’d rather have than Adanna,” stated Pettine.

The first bill of the meeting which concerned the allocation of funds, $500, for the September 11th Day of Service was passed.

The second bill introduced concerned the Allocation of $3,000 in funds to assist Mason Veteran Patriots. The bill was described in the public comment during the initial stages of the meeting.

Rich Strauss, the Secretary of Mason Veteran Patriots and a member of the Veterans of Foreign Wars (VFW) Post said that the primary objective of the bill is to have Mason send funds to help rebuild infrastructure at John Lyon VFW Post in anticipation of a 9/11 Day of Service. The funds would also be used to renovate the gardens, replace a flag, fix a raccoon infestation and eliminate foul smells from the facility.

The representative goes on to say that he would love not only the Student Government but the entire campus to get involved with Mason Veteran Patriots and their projects, such as their plan to renovate the VFW Post.

The bill was ultimately referred to the Administrative Financial Affairs committee and proper plans of action will be reported soon.

In other business, there was a dispute amongst the senators concerning the ratification of the votes made by the Executive Cabinet Executive Appointment Confirmation Votes taken on April 26, 2018 and May 3, 2018.

Claire Olivier, head of Administrative and Financial Affairs, said, “This issue that’s been raised is that the student body president, Bekah Pettine, was not officially serving as president of the [student body] yet. So, there are some that believe therefore [that that makes her cabinet] null and void … . But, technically, once the Senate votes on something–in this case, the executive cabinet confirmations–we can’t revote on it because it’s already been passed.”

Senator Olivier went on to say that the EDC (Election and Disputes Commission) acts a mediator in this situation and decides whether there needs to be revote on executive cabinet confirmations and appointments.

Davide Genoese-Zerbi provided the following quote: “The constitution states that the term of the student body president begins on Saturday following the first Monday in May. The senate voted on all of President Pettine’s appointments, but they voted on them before Pettine was technically president. So, what I believe needs to be done, since [the] cabinet was not appointed by a sitting president, they need to be ratified. Ratification is defined as taking an illegitimate decision and [making] it legitimate after the fact.”

The speaker went on to say, “The president disagrees with me. She believes there is ambiguity in the constitution. Namely, she says they all vote the term begins the Saturday following the first Monday, but her powers begin before the start of her term which I think is a dubious claim.”

Ultimately, the point was postponed for one week.

Katlyn Weiser and Salma Hamze were appointed as executive secretary of academic affairs and undersecretary for outreach and media respectively.

Behind the Scenes at Fenwick