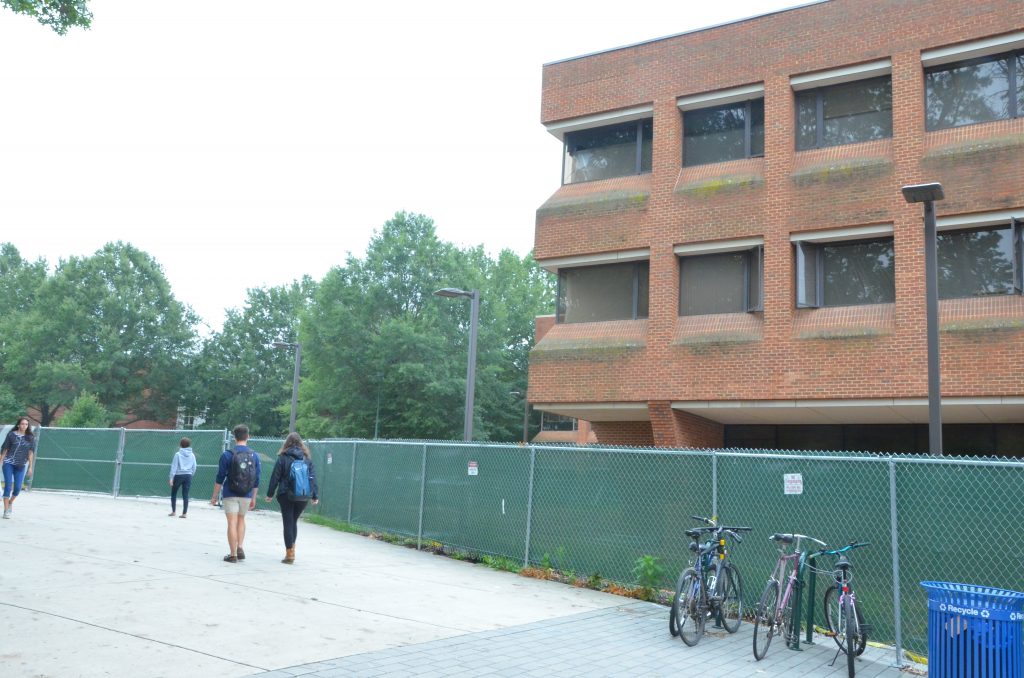 How Mason students feel about construction on campus

With Mason expanding in order to accommodate new students, there is a lot of construction taking place on campus. Construction teams worked throughout the summer to remodel multiple areas, including the Robinson A building. As the construction efforts continue throughout the semester, students are developing mixed feelings about the changes.

Students should expect to see a new addition taking over Robinson A’s spot, which is planned to become a six-story building with 27 classrooms. According to the construction details, the building will have open glass classrooms and smart classrooms, which hints at the new technology that Mason students could expect to use in the future. The “Core Campus Project” will be the main academic center for the College of Humanities and Social Sciences.

Jorge Suarez, a junior, said that the construction “adds a minute or two to get to SUB 1” and thought the additional commute is “not pleasant during bad weather.”  However, Suarez tried to make light of the situation. “We just have to move on and make the best of it,” Saurez said.

Another Mason student saw the construction as an obstacle. “The construction is very inconvenient all around campus and they should focus more on student housing and living spaces, as well as making it more affordable to go to school,” Patrich Finch, a sophomore global affair major, said.

A few freshmen also gave their thoughts about the construction. “I strongly oppose against it mainly for the sake that it cuts off specific routes that would otherwise be paths that could greatly reduce the time it takes to get to class,” Jerry Ao, an undeclared major, said.

Another freshman, Joe Pagan, remembered looking at the school and noticing how much it has grown over the years.  Pagan even remembered walking through SUB 1’s original route. “Before I could just walk right through the path cutting through the Robinson buildings,” Pagan said. “I think it’s taking a really long time for them to demolish the building—it’s as if they are doing it brick by brick. But I think that it is a good thing that they are developing more classrooms for students and faculty.”

While the construction may seem inconvenient to many students now, the buildings will enhance campus life in the future.

“I think that the construction is sometimes distracting in a way, but I think that it is productive that they are trying to expand campus and keep it updated,” Raja Richmond-Sargent, a freshman nursing student, said.

Once the additional accommodations and hang out spots are built, Mason students are sure to appreciate the construction efforts that they once complained about.