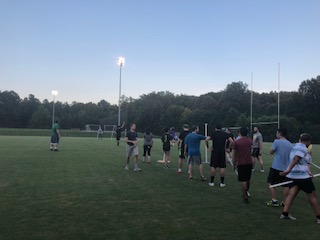 The Harry Potter based sport combines rugby, dodgeball and tag

When you think of Mason club sports, there is only one that comes to mind where you run with a “broom” between your legs. Mason’s club Quidditch team is a coed sport that combines elements of rugby, dodgeball and tag to bring to life the famous Harry Potter game.

“I loved Harry Potter growing up so I saw [Mason’s club Quidditch team] on Snapchat and thought it was the coolest thing,”  said Serena Angone, President of the Quidditch team and one of the team’s two captains. “But I like it because I like all the people. I like being a part of the family, but I also like it because it is coed. I feel like a lot of people assume girls are lesser when it comes to sports, so it’s pretty awesome going out there and proving them wrong.”

The “muggle” version of the sport is very similar to the Harry Potter version with one big difference: no flying. Similar to the Harry Potter version, there are six to seven players on the field at a time and three goal hoops on either side of the oval-shaped field. The team is comprised of four unique positions: one seeker, two beaters, three chasers and one keeper. Each position is identified by a different colored headband.

There are also three types of “balls” used in the game: one snitch, one quaffle and three bludgers. The snitch is actually a person dressed in yellow with a velcro tail attached to their shorts. They are released on the field at the 18th minute and once one team pulls the seeker’s tail, the game is over. During the game there are many moving elements, which is how the sport attracts some players.

“What really attracted me was the physicality of it and the big group of people with a wide range of backgrounds. When we all come together it makes a nice conglomerate. We can all really hang out together during and after practice,” said Brian Daves, a senior at Mason and four-year member of the team.

The club first formed in 2013 at Mason, but became official in their league in 2014, joining 450 other teams across different states. During their season, they travel both within Virginia and out of the state to play other colleges like Virginia Tech, Maryland, University of Virginia, and others. Next March, Mason’s Quidditch team will host a tournament at Mason called the “Clash in the Capital” to compete against other college and community teams.

Anyone interested in joining the team is encouraged to show up to one of their practices on Monday, Wednesday or Friday from 7 p.m. to 9 p.m. on Recreation Field 4. No knowledge of Harry Potter is required.

Seeker – Position in charge of catching the snitch

Beater – Position in charge of keeping the Bludgers away from their team while trying to aim the Bludgers towards the opposing team.

Chaser – Position responsible for controlling the Quaffle and getting it past the Keeper and into the goal hoops.

Keeper – Position responsible for guarding the three goal posts and preventing the other team’s Chasers from scoring.

Snitch –  In the wonderful wizarding world of Harry Potter it is a small, golden flying ball and capturing it ends the game.

Quaffle – A ball that is about 12 inches in diameter and carried by the three chasers. In order for a goal to count it must be thrown through the goal hoops.

Bludger – In the wonderful wizarding world of Harry Potter it is a bewitched ball that flies around and tries to knock players off of their brooms.