Attempts to grow wine in Virginia date back to the settlers of Jamestown, whose numerous attempts failed as a result of disease and poor growing conditions.

Four hundred years later, the now booming industry within the Commonwealth, Virginia’s modern wine history consisting of colonial and Antebellum culture, is a contemporary narrative of the state’s trials in growing vinifera, but with a more successful outcome and palatable taste. 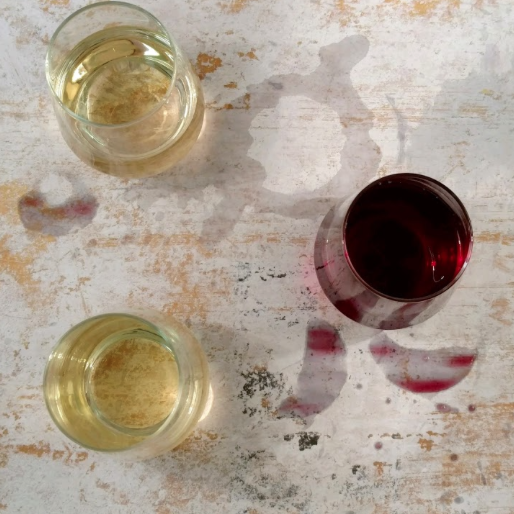 Due to recent weather phenomena of extreme droughts and heavy rainfall, the topic of climate change filters into the everyday concerns of those who already face significant challenges in growing a persnickety plant whose quality is dependent upon a healthy, well-balanced environment.

“The scientific community and the world at large is witnessing the damaging impacts of climate change and how the environmental phenomena is affecting people’s health, agriculture and the well-being of the planet,” says Daniella Vianna, visiting postdoctoral researcher at the Center for Climate Change at George Mason University.

Studies suggest such challenges are hardly theoretical. Climate change is threatening the world’s luxurious commodities, including coffee and cacao supplies, and rising temperatures around the globe could jeopardize major winemaking regions by 2050 when the United Nations Intergovernmental Panel on Climate Change (IPCC) predicts the earth’s average temperature will rise by another 2.5 degrees’ Fahrenheit.

A 2013 study by Conservation International and Environmental Defense Fund reported that lands suitable for growing wines will decline by 25 percent in Chile and 73 percent in Australia. That same investigation suggests the world-wine growing regions will shift, forcing growers to adapt new strategies to still participate in an industry that for Virginia, employs over 4,753 people and contributes more than $747 million to the state’s economy.

For The Winery at Bull Run in Centreville the young vineyard and winery adjacent to the Manassas National Battlefield relies on the history of winemaking in the state to create a unique terroir – the indefinable combination of land, soil, and climate that characterizes a vineyard’s wine – to manage the strains all grape growers face when growing the crop.

Established in 2013, The Winery at Bull Run located in Centreville – 20 miles outside of Washington, D.C. – dedicates its 225-acre property to preserving the past by producing old

world wines on new world terrain. The Hickox family-owned winery sits adjacent to the Manassas National Battlefield Park where the first Civil War battles at Manassas and Bull Run were fought in 1861. The winery prides itself on maintaining the historical remnants of ‘Olde Virginia’ within the urbanized Northern Virginia community that is suitable for growing wine.

Northern Virginia sits within the Mid-Atlantic region at 30 to 50 degrees’ latitude, ideal for growing wine. “Virginia has very much the same growing degree days and longitude as Burgundy, France so we’re in a really good spot here,” says Wayne Mills, vigneron for The Winery at Bull Run.

Though the winery acknowledges the impact climate change has on the global wine industry, it is too soon to tell whether or not climate change is specifically impacting Northern Virginia wineries, says Mills.

“Weather is variable. You don’t have a long enough history in the area here to say climate change is really changing the way you grow the grapes. What I observe is big variations in the weather.” adds Mills.

“The downside of climate change is during the particular periods and the grape maturation you don’t want changes,” Dimmick adds. “It’s very damaging potentially.”

For the winemakers, Virginia’s booming wine industry is rooted in continually acclimating to the environment.

“It’s constant monitoring,” says Mills. His team of workers pours its energy into searching for changes in the vines, acting quickly upon the sight of drastic changes observed in the crops’ health. And while growers are proactive in taking preventative measures to avert damages to the wine grapes, their efforts are not always certain.

“This goes in hand with historical preservation of the land. We are on historically protected battlefields, and our practices are designed to not to interfere with it,” says Dimmick.

The vineyard’s growers combine traditional methods and technological advances in viticulture that are environmentally friendly, preserve the land’s history of Virginia wine and sustain the crop by nurturing them in an area traditionally used for agriculture.

“When this area was first settled in the last half of the 1700s, it was all farmland. Tobacco was a major cash crop, but it depleted the soils. By the time of the Civil War, there were a lot of smaller farms in addition to the large plantations,” says James Burgess, historian for the Manassas National Battlefield.

The practices of the vineyard solely rely on the natural terrain and the abilities of the land, while incorporating innovations in modern viticulture. European varietals such as Bordeaux and Petit Verdot are grafted in disease-resistant American rootstock to combat the very ailments that killed colonist’s chances of producing consumable wine.

Vines are also elevated and stretched along the crest of the Blue Ridge Mountains, creating a natural irrigation system and allowing for cooler temperatures to reach the crops.

The continuing changes predicted by scientists advocates vintners continue to integrate old-world wines in the new-world terrain. For growers within the Old Dominion, such practices are not as daunting because the state is best suited for growing European varietals that yield longer harvesting periods and are adaptable to temperature fluctuations. The challenges Virginia wine makers face is a rather creative challenge that individuals in the industry accept, according to Dimmick.

“I believe it should be an impetus to us in the industry to get creative [and] to do as many different things as possible. We, the winemakers, are in a rut of growing varieties because people prefer them. We have to ask ourselves, ‘If it doesn’t work well, why are we doing it?” says Dimmick.

Wine making serves as an agricultural archive of history documenting the seasonal and palatable changes of a region. Virginia has a history matching the richness of the old-world varieties containing properties from both vintage and en vogue styles, making them a higher quality commodity found only in the Commonwealth, says Dimmick.

Dimmick adds,  “that is the story of Virginia wine making. At the end of the day, what we have done to produce Cabernet Franc and other Bordeaux varietals, and Viogniers has made them leading varietals we market at the winery that are distinctly and uniquely ours.”