Discussion Focused on Issues for Female Coaches in College Sports

The focus of the meeting was principally on why there are so few female coaches within American sports, what can be done to fix this issue, and the experiences of the women there in dealing with prejudice and discrimination.

“If you don’t see a lot of people that look like you, you don’t think you can do it,” said Victoria Sun, director of George Washington University men’s basketball operations. “Maybe they’re not thinking it’s a viable option for them.” 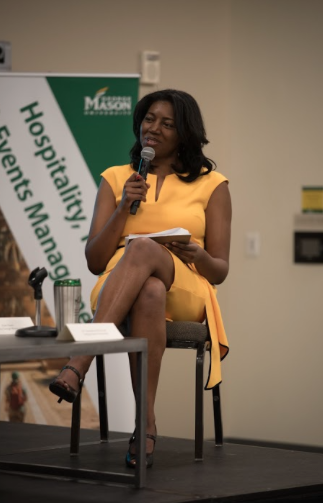 Other panelists included Kate Dunn, who was inducted into the College Football Hall of Fame for being the first woman to host a college football game; Natalie Randolph, senior women’s administrator and Title IX coordinator for the D.C. Office of the state superintendent of education; and Sarana Hyatt, assistant track and field coach for Mason.

“I believe it just takes women doing this more in order to break the stereotype,” said Randolph.

Also included in the panel was Jared Lewis, a senior business management student who has run track and field for the four years he has been at Mason. Lewis described the apprehension he held when he first heard that he would be coached by a woman, and how his apprehension soon turned into awe when he saw what Hyatt could do.

Moderating the event for the second year in a row was Jacqueline McDowell, assistant professor of sport management within the School of Recreation, Health and Tourism. The opening of the discussion centered around why there are so few female coaches in a job that is starting to become less male-dominated.

“I see a lot of female coaches leaving, not because they want a normal life, but because they want to be respected and valued,” said Hyatt. “Knowing what I’ve accomplished is enough for me, and I don’t feel like I have to prove it.”

The women also discussed how they cope with being trailblazers in a field where they are decidedly not the majority. One reason that there might not be more women coaches is that they are not treated respectfully in a male-dominated field. 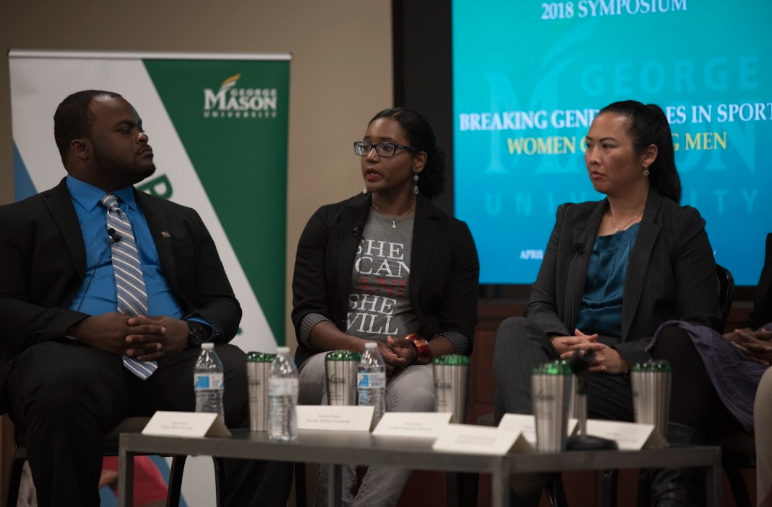 The panelists also spoke about how they have given advice and mentored their athletes, both male and female.

“You just put one foot in front of the other, and you just got to show up, no matter the blood, sweat, and tears,” said Randolph. “You just keep on going.”

Thinking ahead toward the future, Dunn said, “With more girls playing nowadays, you’re sure to see more girls coaching in the future.”

OPINION: You can’t buy happiness—but you can adopt it