WHAT THE NEW YEAR SYMBOLIZES FOR TWO DIFFERENT CULTURES

The beginning of a new year signifies a new beginning, an end to the old, and a chance for a fresh start. As a part of Western culture, New Years is typically celebrated on the first day of the year according to the Gregorian calendar. Around the world, five other countries also celebrate New Years following their own customs. These include the Jewish New Years, Islamic New Year, Thai New Year, Ethiopian New Year, and as well as Chinese New Year.

While each country has their own unique way of preparing for and celebrating New Years on given dates each year, Asian countries such as China and Viet Nam depend on the first new moon of the lunar month. Therefore, Chinese New Year is also known as the Lunar New Year. You may have heard people refer to this year as the “Year of the Dog” and wonder what that means. The Chinese Zodiac follows a 12-year cycle, in which one of every 12 years is assigned an animal including: the rat, ox, tiger, rabbit, dragon, snake, horse, goat, monkey, rooster, dog, and pig. Often at Chinese restaurants, the years and personality traits are listed on placemats as a fun way introduce the 12 Zodiac signs. Even though these Asian cultures celebrate the same new year, each one of these cultures have different traditions and ways of celebrating.

In China, people celebrate New Years to recognize a year of hard work, and to take a break and enjoy a feast together with family. In preparation for the new year, streets will be draped in red, as it symbolizes good fortune and joy. People will often decorate their homes with posters displaying poetic sayings or wishes of luck welcoming the new year. The Chinese tradition stresses the New Years Eve dinner as the most important meal, because it brings together family from all over in a gathering to celebrate the anticipated festivities to come. As for the food, dishes are carefully selected for the meal, each representing an element of luck to ring in the new year.

The dinner will include dishes such as noodles (health & longevity), dumplings (wealth), fish (increased prosperity), and for dessert, tangerines and oranges (fullness & wealth) as well as a variety of many other desserts such as “Tangyuan,” sweet rice balls symbolizing family togetherness. Firecrackers are lit at the end of the dinner to say goodbye to the year, and scare away the “Nian” (nián shòu) beast, a legendary character in Chinese traditional folklore. As an act of passing down good fortune, the older generations pass out “red envelopes” filled with what is known as “lucky money” in exchange for wishes of good health, wealth and prosperity.

In Viet Nam, Tết or Lunar New Year is the single most important event of the year. They spend months in preparation, people clean out their homes to let go of the “bad luck” of the previous year and welcome good luck for the new year. The Vietnamese also have a custom of buying new clothes, getting haircuts and stressing the “new”. For decoration, the Vietnamese fill the house with trees and flowers to light up the house to fill it with good energy. A traditional yellow flower called the “mai” is displayed in every home, plates with an assortment of fruit are assembled (oranges, papaya, mangoes, and etc.) mostly to enhance color and liveliness in addition to their symbolic traits. The holiday is typically a three-day affair, but often celebrated throughout an entire month. Tết represents a holiday for the reunion of families, gifting of special foods to friends and neighbors, and also a chance to pay respects to past generations by welcoming back deceased ancestors to ring in the new year. In day to day life, Vietnamese culture continues to practice the traditions of ancestral worship, due to their belief that much of what they have today is blessed by their ancestors. 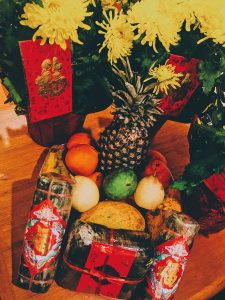 The Vietnamese also participate in the giving out of red envelopes (“li xi”) but the most important aspect of New Years in Viet Nam is “Giao thừa” which is the night of New Years Eve, in which all are ready to receive the new year and transition out of the old year.

Chinese New Years or Lunar New Years hold a lot more meaning that just a celebration of another year going by. To many, it is a strong symbol of hope for a better year. And to others, it is a holiday that represents culture and identity as it cultivates and remembers folklore, legends and morals, teachings from the old to the young, and passing down traditions.

View all posts by ctong →