Mason’s Senior Assistant Director of Admissions Andrew Bunting is currently embroiled in a social media scandal over a Facebook post. 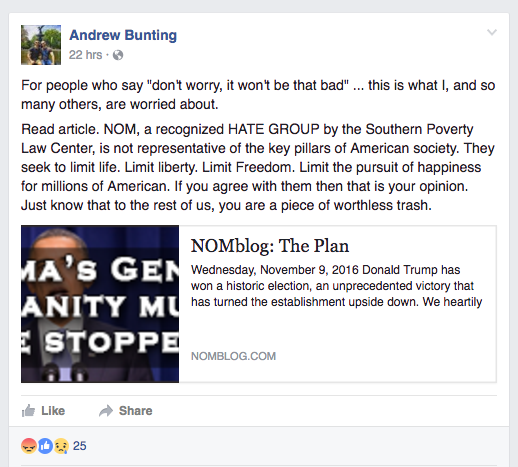 Posted on his personal page, his post sparked an outrage after it talked about the recent blog post from the National Organization of Marriage (NOM) and its relation to the recent presidential election. The blog post in question outlined how the organization planned on working with President-elect Donald Trump and his administration.

“We will work with President Trump to nominate conservative justices to the U.S. Supreme Court, individuals who will adhere to the words and meanings of the constitution. Such justices will inevitably reverse the anti-constitutional ruling of the Supreme Court imposing same-sex ‘marriage’ on the nation in the Obergefell decision, because the decision lacked any basis in the constitution,” Brian S. Brown, the current president of the National Organization of Marriage, said in the post.

Brown went on to outline the NOM’s goals, which include working with the new Trump administration to remove the condition for foreign aid that is given when same sex marriage is recognized and encouraging the passage of the First Amendment Defense Act (FADA).

“If you agree with them [the NOM] then that is your opinion. Just know that to the rest of us, you are a piece of worthless trash,” Bunting said in the last part of the post.

As Bunting’s comment gained traction, concerns began to pour in about the commitment to diversity that Mason prides itself on. People started to question whether students were being discriminated against in the admissions process to Mason, as Bunting is a member of the Admissions Department.

Students such as Elizabeth Kirby, a second year graduate student, were not initially surprised by the comments made by Bunting.

“I have been a student at Mason for 6 years and I have seen a drastic surge in promoting diversity, yet I see declining tolerance amongst students and staff alike for conservative opinions that may not be in line with a progressive agenda,” Kirby said.

Kirby added that, like many conservative-minded students who were following the issue, she was not surprised by what was seen as a lack of punishment from the administration against the actions of Bunting.

Students who didn’t either identify as conservative or support NOM’s agenda also felt that Bunting’s comments were a poor representation of the diversity and strength of Mason. Junior Isis Mosqueda felt that the comments didn’t reflect well on the school.

“I think saying people are worthless pieces of trash fans the flames for sure, that’s not to say however he did not have the right to voice his opinion on his personal account, though it was unprofessional. With his statements shown to the public, I don’t think it shines a good light on Mason as a university,” Mosqueda said.

For sophomore Anastasia Edwards, the difference between conservative students and those who support the move from NOM on same sex marriage was an important factor that she felt was being lost in the media scrutiny.

“If conservatives really do feel uneasy at Mason because of the label they identify with, but they also do not agree with Trump’s sentiments, then it is their job to remind people that Bunting’s comments were not addressed toward the entire Republican Party,” Edwards said, “but toward the specific group who voted Trump because they were anti-LGBT.”

Edwards added that it was a shame to see a representative of the school say cruel words.

As members of the Mason community grapple with the media coverage on the admissions process, the university’s student government was also airing out these very grievances. At the Nov. 17 session of the student senate, members of the student body that sat in the viewing section, or gallery, and senators voiced their concerns and got a chance to hear from the Dean of Admissions, Amy Takayama-Perez.

“[There is] no data or evidence to support that anyone in the office has had a bias towards the process of admitting students. I want to be clear: I am the Dean of Admissions, and they [the admissions decisions] are made by a group and not on an individual basis. It is the same process that all of you here went through,” Takayama-Perez said.

Gallery members also received a chance to speak with a significant number of members from the College Republicans, who made an appearance to speak about Resolution 26, a resolution designed primarily to condemn the post made by Bunting and support all viewpoints at Mason.

Former student senator and member of Mason’s College Republicans Hunter DeRensis agreed that the resolution should be passed.

“While I do not believe that Mr. Bunting should be fired and believe what the Dean of Admissions has said, I believe that the resolution should be passed because the post unduly attacked members of the student body,” DeRensis said.

Though the resolution was pushed to second reading and sent to the Administration and Finance Committee, it was done so after a contentious vote. Accusations were raised by some senators that senate leadership would kill the resolution in committee and thus prevent it from being passed.

Freshman Matthew Owens and one of the speakers from the gallery shared the same concerns.

“I think that even though he certainly has the right to free speech, there has been a complication added due to some people being worried that this would mean that the admissions process is biased,” Owens said.

While Bunting never responded to any inquiries, when asking Director of Strategic Communications for Mason Michael Sandler to comment, he responded with a link to the Mason website clarifying that the views Bunting expressed were his own and not that of the university. An article that was found on Life Site is, so far, the only public response to this scandal from Mason.

“Mr. Bunting’s comments on his personal social media page reflect his personal views. The university does not agree with his comments, and they do not reflect the views of the university,” according to the Life Site article.

As of right now, Bunting is still on staff and listed as a member of the faculty. No information was provided or made public as to his current status within the Admissions Office.