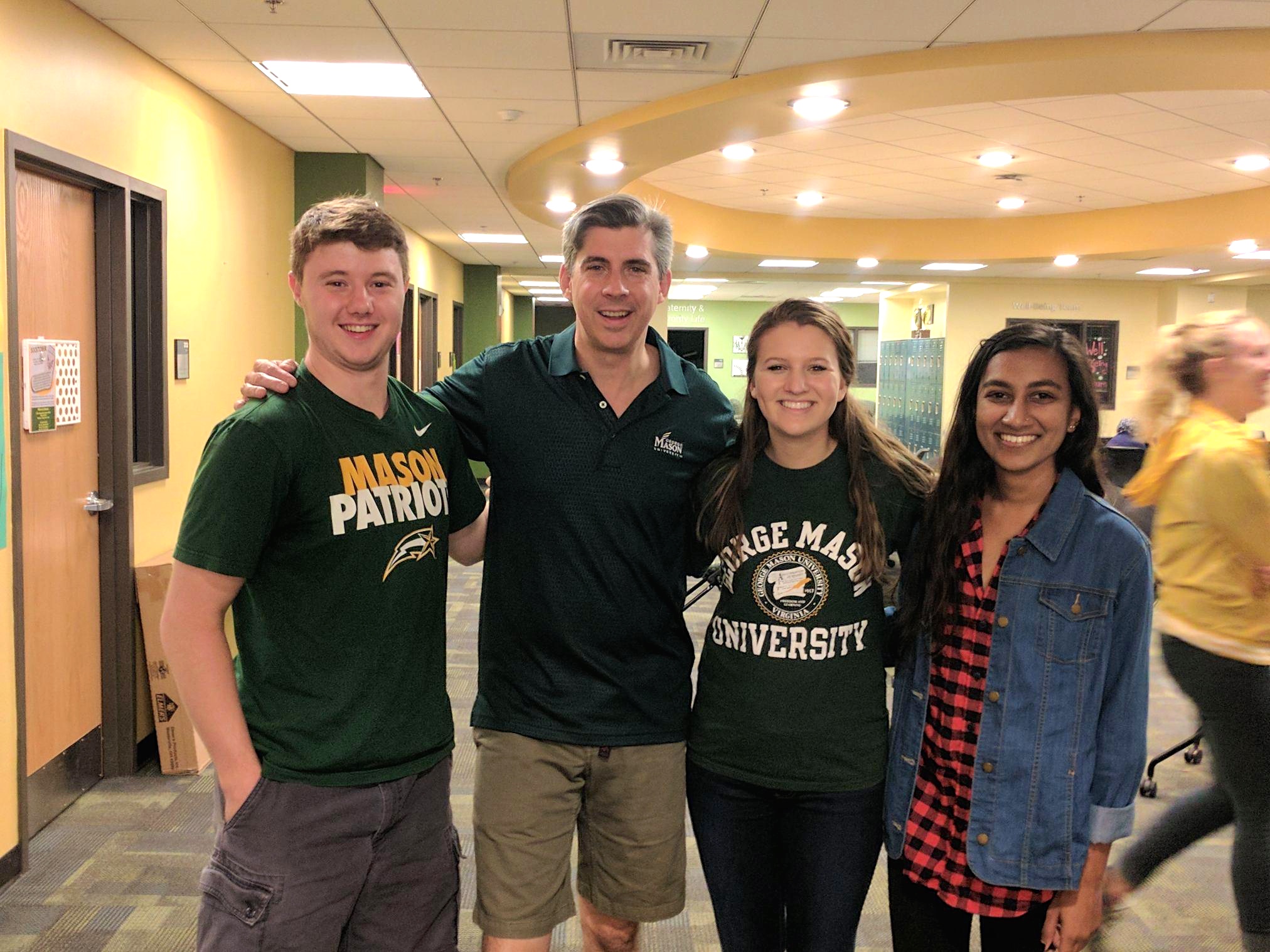 The scene inside the Office of Student Involvement was anything but quiet Nov. 3. A sea of people milled around and engaged in conversation, while sophomore Danni Gonyo ran around ensuring that every last detail was finalized for the evening’s Night Walk.

A tradition dating back to the ‘80s and initially created by Mason’s student government, Night Walk serves as a way for students and administrators to connect while also identifying problem areas on campus.

While awaiting the arrival of Fournier, Ganesh and Sullivan sat and talked about hometowns and discussed punctuation on a number of Senate resolutions that Sullivan was working on finalizing. Gonyo continued her efforts to organize everyone and get them started on their section of campus.

Soon Fournier arrived, and after a round of introductions and pleasantries, the group was off, taking the stairs to the top level of the Hub before emerging onto Rivanna River Way, the road that cuts between the Hub and Southside.

Taking a right, they headed for the loading docks and the small parking area behind the Hub. Here, they identified the need for more lighting, as well as a stop sign for traffic re-entering Rivanna River Way, as one does not  currently exists. Heading down the road, the group engaged in some light conversation, and Fournier took the time to answer some questions.

Fournier has been with Mason for almost three years now, and this year marks his third time participating in Night Walk.

“I love being able to participate in events such as Night Walk, as it allows me to get out of the office and work with the students while also creating that connection between the administrators and students,” Fournier said, “which is so vital to our continuing work of improving campus.”

Making their way to the parking lot on Buffalo Creek Court, Fournier kept true to his word, discussing hometowns and food with Ganesh, while also talking about sports and the latest highlights from college football with Sullivan. As they looked around the lot, they again noticed that more could be done in terms of lighting. As Gonyo noted it on her clipboard, the group again moved out, taking the path to Eastern Shore.

Following the path behind Eastern Shore, the group identified a number of lamp posts that were out, including some at Pilot House. From here the group began to circle back, this time taking the walking bridges that connect Eastern Shore and the Commons.

Here the team noted there were some loose boards, as well as missing parts to the bridge’s railings. Reaching the other side, the group split up, with Sullivan and Fournier inspecting Dominion, Franklin and Grayson, while Ganesh and Gonyo inspected the rest of the Commons.

During this part, they found that a walking path side light could use a new bulb, and the light outside of Carroll could use an increase in wattage. Overall, the biggest concern was the need for a new safety barrier arm outside of Southside that would prevent cars from driving onto campus walkways.

Rejoining with Fournier and Sullivan, Ganesh and Gonyo’s group learned that the other group found some areas of improvement as well, including lighting with exposed wiring, a student-made path behind Grayson that had numerous drop-offs and a lack of railing on the stairs outside of Dominion.

From here the group made its way past Southside, noting numerous lights out on the walkway that connects Southside with Skyline Fitness Center, the walkway that connects Southside with its iconic tower and one on Skyline itself. Taking a right, the group walked towards Sandbridge, the outer edge of their zone. Finding no issues along this path, they turned back towards the Hub and again engaged in conversation, with Gonyo and Fournier discussing current and prospective dining establishments on campus.

Outside the Hub, the group noted that the lighting situation could be improved here as well and discussed the possibility of creating a new crosswalk and set of ramps that would go straight from the stairs at Southside to the walking path beside the Hub. Having finished the inspection of their zone, the group made their way back to the Office of Student Involvement.

“We definitely filled our sheet with issues tonight, which is a great thing. We want campus to be better, and our overall goal is to recognize what we have fixed, and what we can still improve on,” Gonyo said.

At the time of this writing, student government is still working to create a full report on all issues identified by the 15 groups.