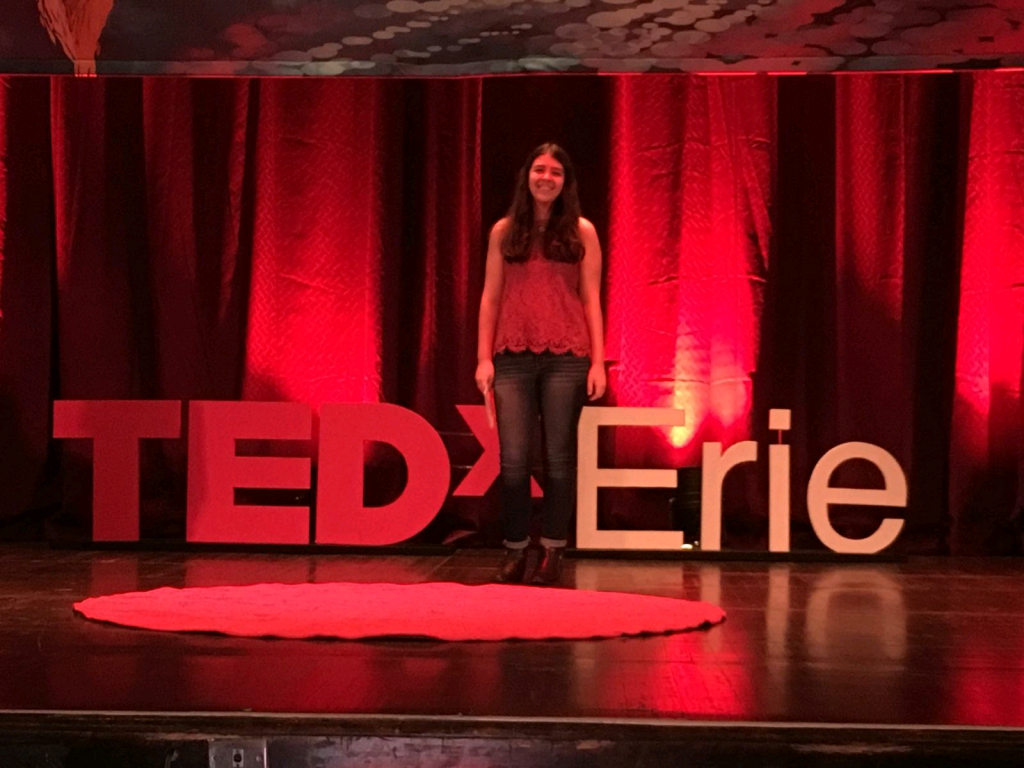 The livestream of TEDxErie picks up, and a soft male British voice speaks alongside a vibrant video backdrop and says, “Today you are part of a global conversation about our shared future.” It is Nov. 5, and time to watch sophomore psychology student Emily Smith present her first TEDx talk.

According to the voice, “TEDx is an initiative of the TED conference, a non-profit devoted to ideas worth spreading,” but it is independently organized by local communities. After applying and months of waiting, Emily said she finally had the chance to live her dream in helping to normalize the conversation of addiction on one of the world’s most powerful platforms.

The room of the historic Warner theater hushes, the drum beat stops. Standing in front of the iconic red block letters, Emily announces she is fighting for her life.

In order to know why, she starts with her most vivid memory of her mother. Every week, her mother would meticulously lay out her pills, one pile by one pile, in a perfect row on their kitchen counter in Scranton, Pennsylvania. Emily’s mother fell into a generational addiction cycle of prescription drug abuse, just like her mother and her mother’s mother. She left when Emily was 12. Emily’s dad, however, broke the cycle.

Mark Smith grew up with cerebral palsy, taking care of himself with two alcoholic parents, whose parents before them were alcoholics. Emily said Mark is her inspiration, her best friend. Ultimately, though, Emily knows it’s up to her whether she can break her family’s legacy of addiction to save her life.

Emily’s mom is currently dying in hospice due to organ failure. Emily said she was just a physical presence in Emily’s childhood, never able to provide emotional support. Most of the time she would sleep after taking her pills. One night when Emily was 10, she decided instead to be a “functioning addict.” One thing led to another, and all Emily can remember nearly 10 years later is locking the door of one room with her and her father on the inside while her mother was holding a knife on the other side. Mark called 911 and the police showed up about 30 minutes later.

Emily remembers feeling numb. Then she saw her mother being taken by the police. Right before she was walked out, she looked at Emily and kind of murmured sorry. That’s when Emily said she broke down.

Once her parents got divorced when she was 12, she rarely saw her mother. Sometimes she would get an out-of-the-blue text saying something lewd or hurtful. Here is the one she presented at her TEDx Talk:

“You need to take a class on mental illness. I have hurt you over the years but you have hurt me too. I cannot take it anymore. I am giving up,” the text read.

It’s moments like these Emily said she has to dig deep into herself to find some empathy.

Nearly a week before her TEDx talk, Emily said, “I look at her and it’s hard. She wrecked part of my life. But I have to realize that she isn’t all there, she isn’t healthy.”

Because of her mother’s mental illness, Emily said her mother chose to put her addiction before her family. She had a choice.

Emily knows it’s still not going to be an easy path. For her TEDx Talk, for instance, Emily presented Harvard scientists’ research on epigenetics.

“Epigenetics is the evolutionary pool of certain genes that affect how our brain works,” Emily said.

Because of her two generational addition cycles on both sides of her family tree, and given she grew up with an addict, Emily is four times more likely to suffer from addiction. Yet Emily emphasizes that evolution and environment aren’t the only factors at play; she knows she has the same choice as her mother.

Emily knows it will be her purpose in life to help others make the choice not to go down those paths despite their family’s legacies. In high school she received the chance to volunteer for an adolescent drug and alcohol counseling rehab center. She felt she made an honest connection with those teens. She knew what they were going through.

Emily’s vulnerable, genuine nature came across as so powerful in her TEDx application video that no one out of the 20 volunteers who chose the final eight speakers out of the 40 applicants voted against her, according to TEDxErie curator Jonathan D’Silva.

“No one really saw any need to discuss it. She was in,” D’Silva said.

D’Silva said that they decided to open with Emily because her story spoke to this year’s theme for TEDxErie, Don’t Give up the Ship, in a more direct and unique way than their other speakers.

“Emily is fighting in the now. With others, more time had elapsed with their stories. For someone as young as she is, her story was so real. She certainly set the bar for anyone else,” D’Silva said.

“I think she made a connection to people because they saw themselves in her. We all have struggles but she brought inspiration. People come to TEDx events to hear the speakers because they bring ideas with soul to the platform,” Stone said.

Emily said she is a firm believer that in order to start movements, you have to share stories. For her this meant overcoming a fear of speaking.

As she wrote in her Odyssey article, The Courage to Speak Up, Emily said, “I’ve always sat and watched TED and TEDx talks and all of these amazing people and admired them for being so courageous and thought-provoking. I’ve always wanted to use my voice to make a difference, but never quite knew how. As I started writing, I found my voice. I found I was so passionate about something that it led me to using my voice. If I could write it on paper, why can’t I speak about it?”

Emily added that her comfort in saying things on paper but fear to speak in public comes in part from her father. For Mark and Emily, her TEDx talk was the quintessence of a way of life they share: not generational addiction, but their willingness to risk failure in the pursuit of success.

“For Emily to get up on that stage and present her truth took an incredible amount of courage,” Mark said.

Emily said she knows what it’s like to not have the courage to speak. But she wants her fellow Mason students to know that they can overcome that fear for greater mobility in conversations that are affecting our world in this very moment. You have a choice.