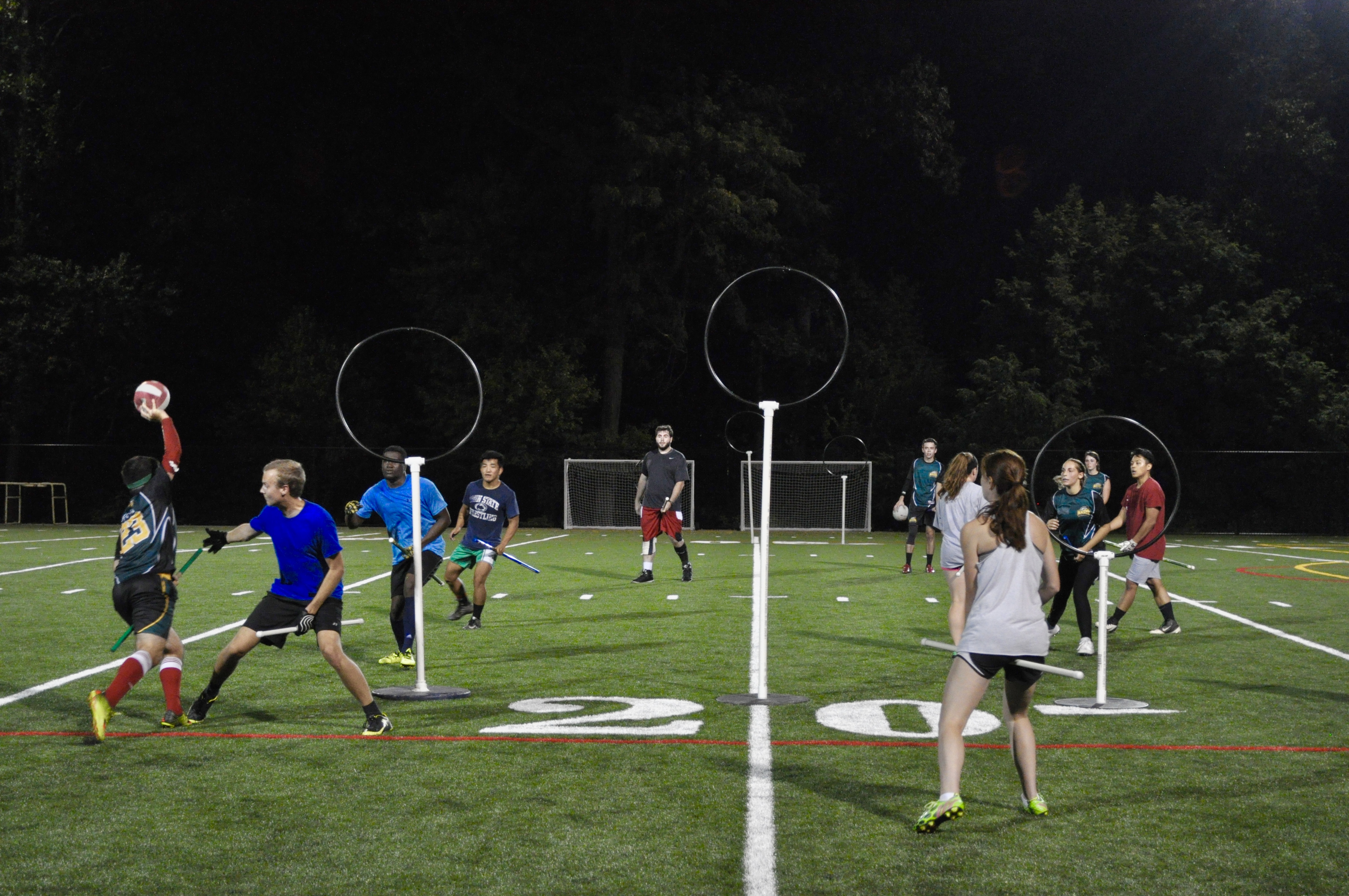 The quaffle is passed to advance the ball down to the end of the field during practice on Aug. 30 (Dave Schrack/fourth Estate).

Quidditch was first introduced in the wizarding world of “Harry Potter.”

Over the last 10 years, however, it has expanded beyond the pages of books and blossomed into an event that holds worldwide tournaments and is governed by the International Quidditch Association.

Quidditch is a burgeoning sport that has been steadily fielding teams across the world, from Australia to Argentina to here in the United States. It has developed particularly on college campuses, including George Mason’s.

Mason’s quidditch team has “been around officially for two years, but there was an unofficial one year before those two years,” Fleur Wayman, one of two team captains, said.

Quidditch is a sport that requires athleticism and mental sharpness and is bound by a clear set of rules and scoring regulations.

“There are four players” who can score: “one’s a keeper, three are chasers,” Lance Strain, the second team captain, said. “They use a deflated volleyball”—known as a “quaffle”—“and their goal is basically to pass the ball around and drive it to other players to score through anyone of the hoops front or back.”

The “hoops” are three posts with rings at the opposite end of the quidditch pitch. The center post is the tallest, but each ring is worth 10 points each.

“The other two players on a team are the beaters,” Strain said, “and they use a dodgeball to knock out other players,” or “beat” them.

“When you beat another player, it takes them out of play, which means they have to dismount the broom”—a stick each player carries between their legs—“and run all the way back to the hoops and tag back up before they can get back into play,” Strain said.

Chasers can also tackle a player to prevent him or her from scoring as well as potentially cause a turnover. 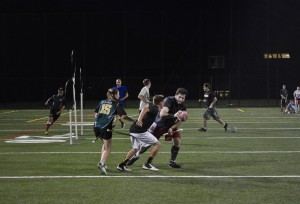 Members of the quidditch team fight for the ball during practice on August 30th. (Credit: Dave Schrack)

But the most important aspect of a quidditch match occurs in the 18th minute.

“At 18 minutes, the Snitch comes out,” Strain said, “which is generally a bigger guy, somebody who played wrestling or some kind of a football sport. And they have yellow shorts with an 8 inch tail with a tennis ball in it,” fastened to the shorts with Velcro.

Players must use their brooms to steal the Snitch and maintain control of it.

The Snitch, however, is legally allowed to defend him or herself against other players.

“The Snitch can use both hands, they can throw you, push you; He’s basically free to do whatever he wants besides punch and kick you,” Strain said.

Successfully throwing the Snitch through the hoop will not only score 30 points but also end the game.

No matter which team gets the Snitch through the hoop, though, the team with the most points wins the match. 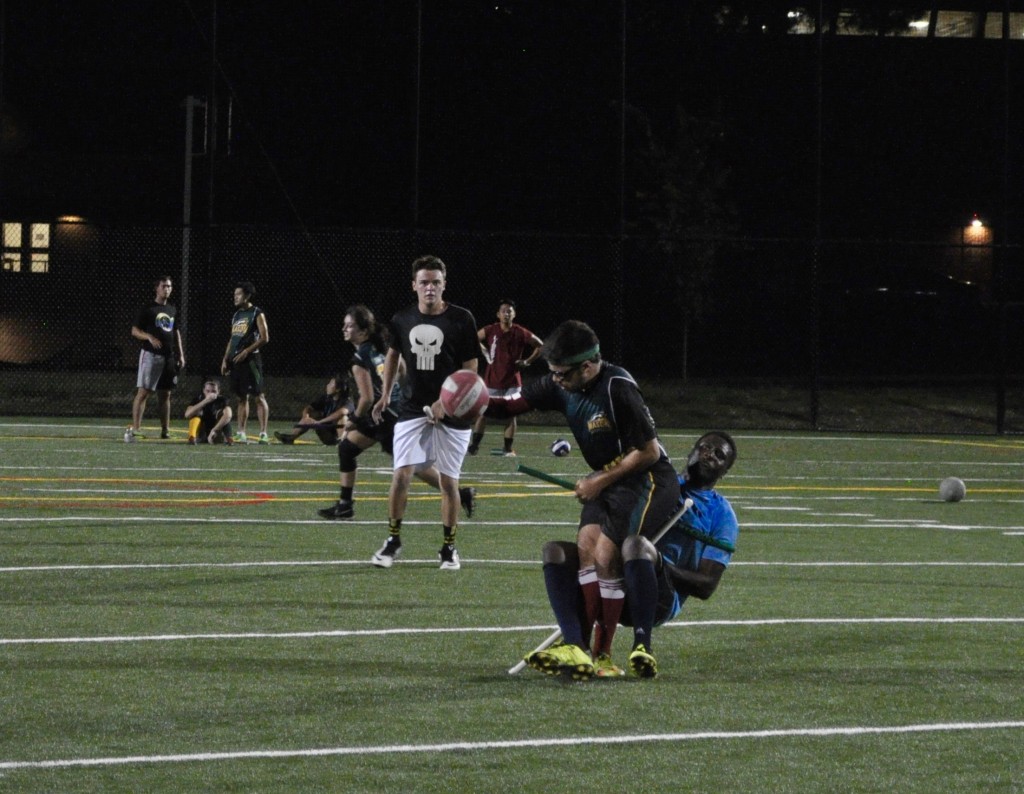 Mason’s quidditch team has already tasted success, having earned a bid to compete in the Quidditch World Cup in their first official year. [Editor’s note: despite its name, this is the name of the United States’ national championship.]

The United States Quidditch Association, known simply as the USQ, has split the country into eight regions in which quidditch teams play. Teams compete in regional tournaments, and the winners  will eventually compete to be the US quidditch champion.

There are around 300 quidditch teams in the U.S., all of which are either collegiate teams or adult community teams. To earn a bid to the World Cup, “you compete basically in pools and this huge bracket for a spot,” Strain said.

During its efforts to secure a bid, Mason’s team “didn’t do too well in [its] pool because [the team] went through a bunch of harder tournaments,” Strain said. “And so we went into brackets. We had to play a game and then we faced the No. 1 seed of our regionals.”

The team, despite being underdogs, defeated the No. 1 seed, which secured their bid to the World Cup.

“It’s called the IQA, or the International Quidditch Association,” Wayman said. “So there are teams all over the world—South Korea, Canada, Australia.”

Australia was the recent winner of the international tournament, having beaten the United States, who were the defending champions.

“To play in the world league, you have to apply,” Wayman added. “And then they watch you in person, they watch film—you have to play a certain amount of time for them to see you in action.”

The IQA will then determine the roster for Team USA.

“And if you make it, you get to go to wherever the World Cup”—the international tournament—“is held.”
The quidditch team holds practices every week and will be holding a tournament starting Oct. 29.

Through the Google Glass