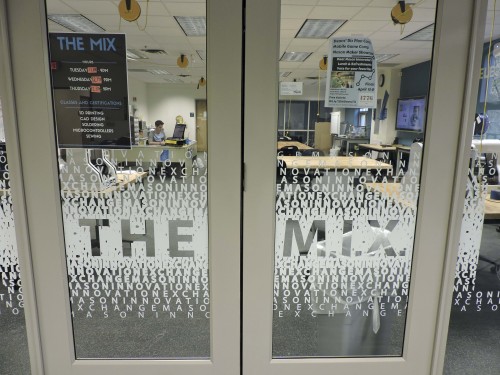 Nestled on the third floor of Innovation Hall, the MIX is a collaborative environment where students and faculty can go to gain access to resources and equipment to help design, build and create, according to first-year master’s student Mana Momen, the MIX’s operations manager. (Sarah Kladler/Fourth Estate)

Almost a full academic year since the formation of Mason’s Makerspace, the Mason Innovation eXchange (MIX) has had a busy year full of inventing and getting creative ranging from 3D-printed prototypes to environmentally friendly cigarette butt receptacles.

Nestled on the third floor of Innovation Hall, the MIX is a collaborative environment where students and faculty can go to gain access to resources and equipment to help design, build and create, according to first-year master’s student Mana Momen, the MIX’s operations manager.

“Our purpose is to provide an open interdisciplinary environment that helps foster creativity and innovation among university students. Students can come join our workshops to learn how to operate our 3D printers, sew, design 3D models, program microcontrollers, or even make chainmail,” Momen said via email.

According to the Open Education Database, Makerspaces “are creative, DIY spaces where people can gather to create, invent, and learn.”

Momen said the MIX is currently open to any student, regardless of their department.

“Students may operate the equipment on their own once they have been trained and certified via the appropriate workshops. Our equipment include 3D printers, 3D scanners, a sewing machine, an electronics bench with various tools and supplies, a large interactive touch screen monitor, and a separate meeting space area called our ‘Think Tank,’” Momen said.

Miller, who is also a professor in the School of Business, said he has seen a large number of students use the MIX since it opened in the fall.

“The number of students using it [the MIX] has grown dramatically this semester,” Miller said. “October through January was kind of a real chaotic start up period, and then around mid-January [to] February really started getting under control.”

Momen added that many of the students who have come to the MIX have been using the 3D printers to print prototypes for their product designs or for projects in their engineering classes. They have also had students stop in to learn how to sew.

Miller said that the MIX is mostly student-run. He said there are about eight to ten students in charge who teach workshops, work on operations or perform marketing and communication tasks. Some of the workshops taught are basic 3D printing workshops, electronics workshops and sewing workshops, to name a few.

One such student who works at the MIX is sophomore biology major Brian Davies.

“I started a Makerspace back where I’m from, down in Richmond, and I did robotics back in high school, so I wanted to come here and work with 3D printers just to do the same thing and learn more about it,” Davies said.

Davies also teaches a chainmail workshop that reviews the history and production of chainmail, along with how it is used in modern times. He added that any student who wants to work of projects and use the 3D printers, or just embrace their creative side, should come and take advantage of the MIX.

Projects created at the MIX range from prototypes sold on the internet to projects for students’ engineering classes. Miller said one student made an automatic dishwasher brush that helps people with one arm, like veterans, wash dishes. He added that another set of students designed a small receptacle for storing cigarette butts until they can be disposed of properly. Miller said that students who are part of the Honey Bee Initiative on campus have used the MIX to create a beehive sensor that monitors the health of beehives. Students have also made jewelry and clothing with the tools from the MIX, Miller added.

Miller said that there are many plans for the future of the Makerspace on campus, but first and foremost is getting more students involved as both participants and staff.

“We want more and more people to have this experience … to know that if they come up with an idea, there’s a place to come and start working on it. What we sometimes like to call, we’re trying to create a ‘prototyping mindset’ in our students,” Miller said.

He added that what he means by this is when someone, say, a student, sees a problem, they might start thinking through solutions but not be able to put them into practice. With Makerspace, students will not have to sit around thinking about their ideas, but they can actually come in and start working on a solution right away.

Momen said that the people at Mix are currently working on air ventilation systems so that they can provide soldering stations and access to a laser cutter.

Miller said that a large part of the Makerspace idea is to get students from different fields of study to join up in collaborating on these hands on projects.

“Nobody cares if you’re from business or engineering or CHSS — you’re in this space,” Miller said, “and that’s what’s great and that’s a big thing that this [the Makerspace] is going to do and already is doing, is breaking down the walls between disciplines.”

Click through the gallery below to view more photos of the MIX. All photos by Staff Photographer Sarah Kladler.