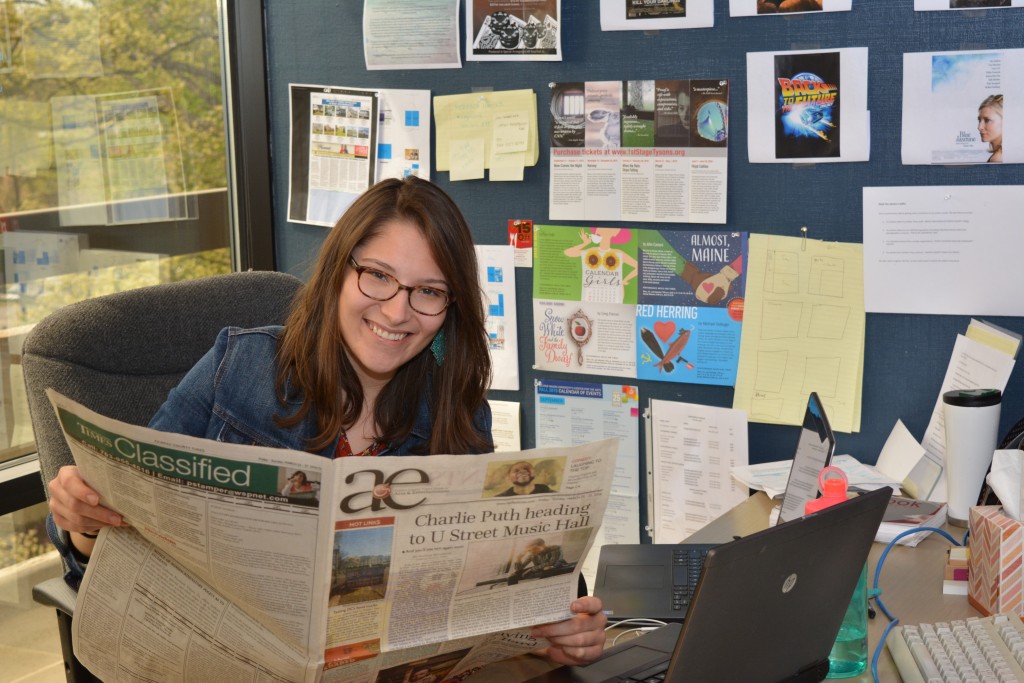 Topping lattes off with caramel syrup during the weekends and editing articles on weekdays, recent Mason graduate Hannah Menchhoff is on her way to achieving her dream of editing international journalism.

Menchhoff currently works as the editor for the Arts and Entertainment section of Fairfax County Times, while also making time for her other passion, coffee, as a barista at Commonwealth Joe Coffee Roasters in Arlington, Va.

Menchhoff said it is difficult to pinpoint the moment she became passionate about journalism, though she does remember her first magazine subscription, which she says might have started it all.

“I have always loved magazines, I always begged my mom to buy them at the grocery store and Entertainment Weekly was my first subscription that was out of the kids magazine realm,” Menchhoff said. “So in my head, I was always like, ‘Wow, I want to work for those guys.’”

Menchhoff said her interest continued to grow when she discovered the stellar writing in magazines like Vanity Fair and Esquire. “That was probably in high school, and I started reading the newspaper more as well. But ultimately, it wasn’t until I became an editor at Fourth Estate when I was like, ‘Wow, this is something I really could do with my life.’”

Mention graduated from Mason in 2015 with a degree in communication and a minor in theater.  As a Mason student, she was actively involved with journalism as Fourth Estate’s online lifestyle editor. During Menchhoff’s senior year, she also reviewed plays for Fourth Estate.

“I started reviewing plays my senior year at Mason, thanks to one of my acting teachers,” she said. “Those [reviews] literally gave me the job I have now. Fairfax was looking for a new editor, and I guess I had the background needed.”

Menchhoff also has another passion: coffee. “I am pretty obsessed with the specialty coffee industry right now,” she said. “The taste of coffee is obviously awesome, but what I am mostly intrigued by is the sourcing of the coffee. Like a coffee from Ethiopia is so different from a Kenyan coffee which is completely different from a coffee grown in Colombia. Then you can take it one step further and look at the direct trade interactions between the farmers and the roasters. It is an industry where it seems, for the most part, ethics is becoming of vital importance.”

At the Fairfax Times, Menchhoff helps shape the coverage, editing and outlook of the Arts and Entertainment section. This job is similar to her work at Fourth Estate, but on a larger scale.

“I love enhancing a vision, if that makes sense,” Menchhoff said. “I love helping both the writers and the publication bring this grand idea they have to life. Seeing those pieces of a story come together, for me as a writer and as an editor, is just this really beautiful thing. It is especially worthwhile when it was a struggle to see where those pieces fit, but then you have this idea, and it just falls into place.”

Menchhoff’s job at the Fairfax Times has solidified her desire to edit  for a bigger publication down the line.

“The Fairfax Times is great for my ability to practice my writing and I have a lot of freedom to write about what I want to write about because Fairfax County is so big,” she said. “It does make me realize I love being an editor instead of strictly a writer, because there is a bit more diversity in the day-to-day tasks. However, I also realize size is important to me as well. I can’t wait to one day be on the national or even international scale of journalism.”

Menchhoff’s days at the office consist of planning and controlling the content that gets put into her section.  “Most of my days are taken up with me editing freelance writing, putting together weekly calendars, doing a lot of phone interviews and writing,” Menchhoff said. “Also, a lot of my job requires working with our advertising director to balance ads and editorial, which is a completely new experience for me. Really, my job is just a lot of planning. Planning for the week, like what article should go on what page, planning a calendar for the coming weeks and just planning my day once I walk through the door.”

She has worked on a variety of exciting stories for the Fairfax Times, including interviewing “See You Again” singer, Charlie Puth, but her favorite story was about craft beer.

“I am doing an in-depth look at the craft beer market in Virginia, with an obvious focus on Northern Virginia,” she said. “It’s been a lot of fun because I have actually been able to go to the breweries when they aren’t busy and get a real look around. And I have had the opportunity to talk to some really smart people, like a former Mason professor who used to teach a class on beer and wine and the president of the Virginia Craft Brewers Guild. There is just so much going on in the industry, and it has been great to learn about.”

Her dream job would be to run her own magazine in New York. “I don’t want to say what the magazine is about because I really don’t want someone to try to snatch my brilliant idea, but that would be a dream,” she said. “But if I don’t start my own magazine, I would settle with the New Yorker or something like that, not that that would be settling at all because obviously the New Yorker is amazing and is the epitome of storytelling in my mind.”

Menchhoff advises Mason students to go with their gut when making career decisions. “I have realized in the last year-and-a-half everyone wants to give you their opinion on how they think you should proceed,” she said. “I, of course, really appreciate some of the advice I have received. That is not to say of course some of it is also annoying because it conflicts with other advice. So at a certain point, you just have to decide for yourself [and ask,] ‘What is the best thing I can do for myself right this second, and what just feels right?’.”