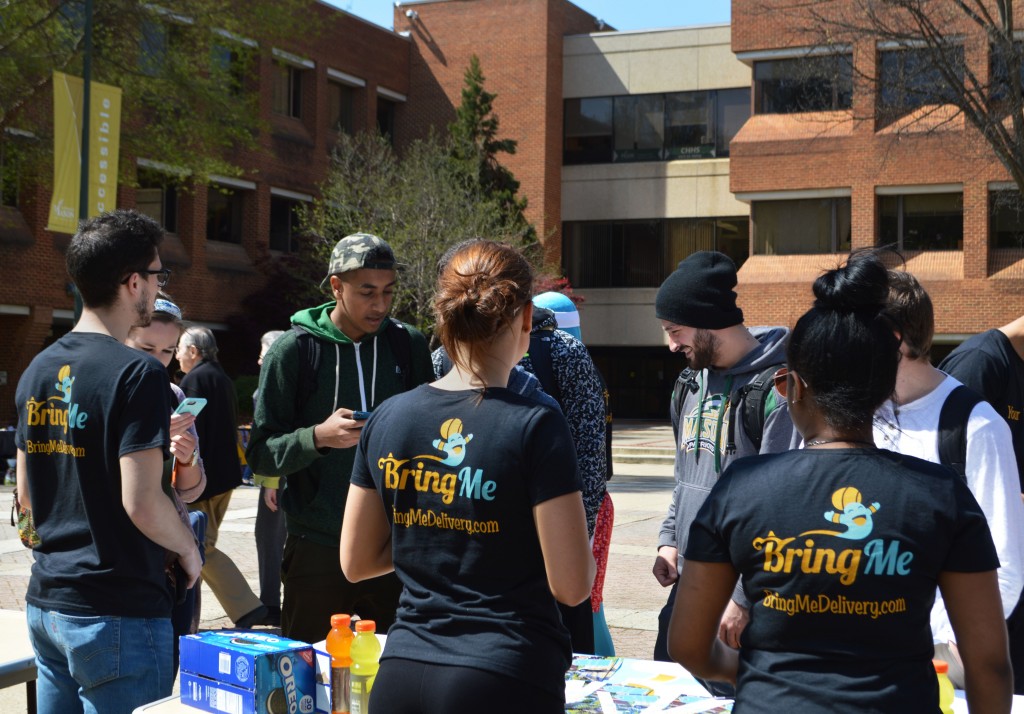 “The future.” That’s how Mo Belhaj, co-founder of the new app BringMe, describes the fledgling start-up he and Moustafa Baiou founded in 2014.

The app, which launched on April 11 and is available for both iPhone and Android, offers users the option of having almost anything delivered to them at any time, whether that be in an hour or a week. It also allows those who qualify to make a few bucks by delivering said items.

Users create “wishes,” or orders from an establishment of their choosing and add a “BringFee,” a tip that the “bringer,” or delivery person, will receive upon successfully completing an order. Users then receive their wish, whether that be a burrito from Chipotle or groceries from Safeway, as long as the delivery location is within five miles of Mason’s Fairfax Campus.

Baiou and Belhaj, both Mason alumni, thought of the idea while sitting in the Johnson Center. “[We] were studying for this finance exam, it was finals week, and we were just really hungry and we wanted Chipotle,” Belhaj said.

The two did not want to take the time to walk to their cars, drive to Chipotle, order and wait for their burritos, drive back to campus, fight for a parking spot and then find a place to resume studying.

“What if we had somebody like our friend deliver us Chipotle?” Belhaj said. It was these inconveniences that inspired Belhaj and Baiou to create BringMe.

”Parking spots are very limited, the food is not as good as you want it to be [on campus]; things like that kind of gave us ideas to help out students and help out ourselves and create a nice business that everyone can benefit from,” Belhaj said.

When a “Bringo,” or a user, makes a wish, the app will suggest a BringFee. It is up to the Bringo to decide the tip.

“I think the bigger the tip is, the quicker [the product] will get delivered,” Belhaj said.

Once a Bringer accepts a wish, they can communicate with the Bringo anonymously via texting and calling through the app. After their wish is fulfilled, the Bringo is automatically charged using a credit or debit card linked to the app. Bringers are responsible for paying for customers’ orders and are later reimbursed by BringMe.

“I think it’s [BringMe] a good idea because it offers a convenient service to people who aren’t looking for a very expensive service like Uber or Tapingo,” Stephen Guion, a junior at Mason said. “I feel like there’s going to have to be a lot of explanation when it first comes out because people might find it a little strange. People are very guarded about monetary transactions.” 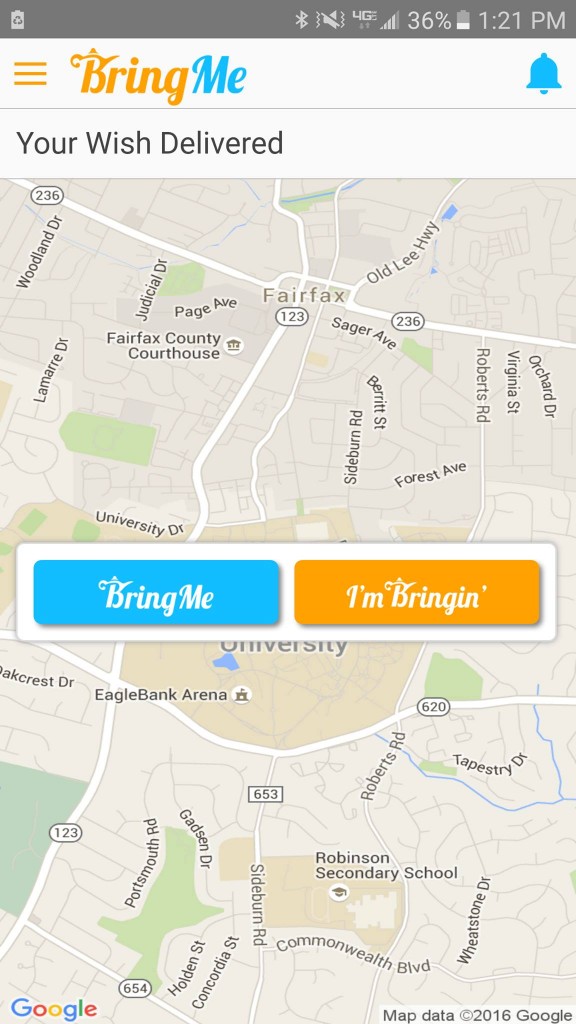 Baiou explains that everything is done through the app. Bringers can be anyone, but the co-founders think it is a position that will likely appeal to students looking to make some extra money. They have about 25 to 30 certified bringers. Bringers are allowed to complete up to three orders at a time and receive the BringFees they collect either via direct deposit or PayPal. If a Bringo wants a burger from McDonalds and a Bringer looking to make some cash is nearby, they can choose to accept that wish.

But what if a Bringer isn’t nearby? What if you have to go to class in an hour and your wish still hasn’t been fulfilled? This is where Certified Bringers step in to finish the job.

Certified Bringers are independent contractors hired by BringMe whom the app’s team push to complete unfulfilled orders. “Let’s say that [a user] puts an order up and nobody accepts it … we have this Certified Bringer that goes and delivers the item for so [the user] uses the app again,” Belhaj said. Certified Bringers make more than regular Bringers (the standard tip plus 50 percent) and have to apply for the job.

Belhaj and Baiou emphasized how easy and advantageous being a Bringer was. While similar apps, such as Uber, take time to vet their drivers, BringMe usually confirms applicants the day they apply.

Several other apps already offer delivery services, such as Postmates, GrubHub and UberEATS. However, the BringMe founders aren’t intimidated. “We kind of welcome the competition,” Baiou said. “I feel like we’re coming at it from such a different angle than all these other apps.”

They describe BringMe not as a service, but as a platform for others to provide services.

“We don’t have a pure competitor so far,” Belhaj said. “It’s such a new concept and such a new idea that nobody has actually done it before.”

While other apps are more restrictive in what they deliver, BringMe users have a wide variety of choices. Bringers can deliver almost everything except controlled and illegal substances, objects that are too large to fit in an average automobile and anything over $350.

BringMe has been assisted by both the Center for Innovation and Entrepreneurship and the Enterprise Center, two small business incubators operated by the university.

“Mason has been a big part of the BringMe inception,” Belhaj said. Both facilities offer amenities and services that small start-ups like BringMe need to grow, including free one-on-one business consultation, furnished office space and monthly Lunch N’ Learn seminars.

BringMe has big plans for the future and hopes to expand rapidly in the coming months.

“Our goal is to take BringMe across the DMV (the D.C., Maryland and Virginia area) by the end of this year and start moving to other cities by next year,” Baiou said.

They also plan to evolve from a simple mobile app to something more dynamic. “We have a lot of features we plan to release next year,” Belhaj said. “It’s going to be very exciting.”