After five years with Mason’s men’s volleyball team, Paco Velez has seen a lot. He’s been through coaching changes, experienced new play books and seen players come and go. As his last season as a Mason Patriot draws to an end, Velez shared some insights with Fourth Estate about his experience at Mason and about how the volleyball program has blossomed this year.

FE: What do you want to see out of the team in these last few games?

PV: “I’ve seen in these last few games we’ve played [that] the team is finally clicking together. We’ve been playing really good volleyball. I’m proud of the boys and keep using this momentum.”

FE: Do you think you’ll make it to the NCAA tournament?

PV: “Definitely. We have a great team this year. The guys have a lot of energy and heart when we play, and I definitely feel like we can win the EIVAs and make it to the Final Four.”

EIVA, the Eastern Intercollegiate Volleyball Association, includes eight teams up and down the coast. The team recently beat fellow EIVA member Princeton University (3-0) despite a rough start to the match.

“We hit the storm, and we were able to weather it and finish them and come out with a victory,” Velez said of the game.

FE: How have you seen the program change over the five years you’ve been here?

PV: “The most change I think I’ve seen is Coach Jay. He’s been doing a lot of great things for the program in terms of the plays and following the international theme, so I feel our playing style is more aggressive now and more international play with all the things he’s been taking to the gym.”

FE: What do you mean by international play?

PV: “Just like the aggressiveness and getting high and leaping, not going for tips or rolls whenever there is an out of system ball. Just staying aggressive and going high and deep. And, the defense game we have, they used at Penn State, and we use it here and everybody’s can catching up to it. It’s working really well.”

PV: “The energy, the parents, the fans — they all come out and are always supporting us. It’s a great energy.” 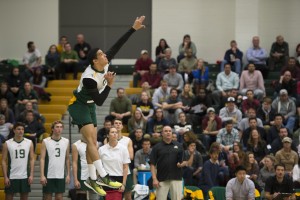 The men’s regular season officially ended this past Saturday, with a win/lose against Penn State. They finished the season with a 0-0 record. How did this compare to last season? -CH

FE: Why did you decide to play volleyball?

PV: “I’ve always been playing a sport. When I moved from Texas to Puerto Rico, I started playing every sport there and started liking volleyball a lot. I just kept falling in love with it.”

FE: Does your team have any pregame rituals?

PV: “We usually get in the locker room and get hyped up. Nothing crazy. There’s a lot of yelling, screaming, pushing, and a lot of energy.”

PV: “The team is like a family. A lot of us don’t have anyone here. Our parents come on weekends for games and stuff, but all we have is each other here and I think that brotherhood that we have here is my favorite thing.”

Off the court, Velez sees his teammates as brothers. Since his family is still stationed in Puerto Rico because of his dad’s position with the U.S. Air Force, Velez only occasionally sees his family in the stands. Consequently, Velez says, his teammates are basically his family.

“Sometimes we get mad at each other. There is a lot of fighting, but at the end of the day, we love each other and we have that brotherhood.”

FE: Where’s your favorite spot to eat on campus?

PV: “That’s hard. I would say Panera this year. You get tired of eating at the same place, but I’d say Panera.”

PV: “I usually study in my room, but with my roommates there it’s hard to concentrate, so I usually go to the library. I like it now because of the remodel. It looks awesome. It’s a good place to hang out and study.”

Velez can be found studying for his criminology classes or one of his two minors, intelligence analysis and forensic science. He hopes these courses will help prepare him to enter the Air Force like his father. In the long run, Velez hopes to become a part of an intelligence agency.

If Velez is not studying, you’ll likely find him hunting down his next milkshake or buying tickets to the latest movie.

FE: What pastimes do you and your teammates enjoy together?

PV: “I like going to the movies and getting milkshakes. They make fun of me because I like a lot of sweets and stuff. We go to Freddie’s; they have some frozen custard.”

PV: “That’s hard. I don’t have a favorite movie. I just like going to the movies and watching.”

FE: Tell me a fun fact about you.

PV: “I think the thing that surprises people is that my actual name is Fransisco. We were talking, and all the teammates didn’t know that, because I always go by Paco. When we had to fill out the roster, they asked you for your nickname, so I said Paco. That’s my nickname. So ever since then all the emails back and forth with the department have been Paco, but a lot of people don’t actually know that’s not my real name.”

Even though the team’s regular season is officially over, the EIVA tournament begins this Thursday, April 21. Be ready to cheer on the men’s team as they try to make their way to the championships in the EIVA and NCAA tournaments. When? Where?