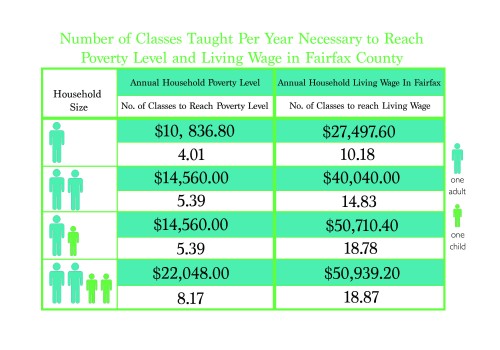 The above information is from “Indispensable But Invisible: A Report on the Working Climate of Non-Tenure Track Faculty at George Mason University” by doctoral students Marisa Allison, Randy Lynn and Victoria Hoverman. (Megan Zendek/Fourth Estate)

A task force dedicated to addressing issues faced by Mason’s adjunct faculty will soon release the results of a semester-long survey.

About a year ago, in February 2015, Provost David Wu created a task force aimed at improving conditions for adjuncts at Mason shortly after a petition was created by the faculty.

Since its formation, the task force has made some smaller-scale changes and is in the process of making more. Further actions will be influenced by the survey results and data analysis.

According to Wu, beginning this Institutional Review Board (IRB) survey was one of the first things the task force did after its inception. The purpose of the task force was to collect data on the adjunct faculty population at Mason and find out what issues were of primary concern to them. The task force is still in the process of analyzing the data, and once they are through, Wu said the data will be shared with the Mason community.

Adjunct professors work part time, often teaching one to three classes per semester — teaching more than three classes would require the university to provide health benefits. They are hired semester to semester and do not have longterm contracts. Wu said the majority of adjunct faculty are “working professionals” and have full-time jobs in addition to teaching at Mason.

“We have access to some amazing talent, human capital, and some of them are holding important positions in government — various industrial organizations and so on — so it would be foolish for us not to access that significant talent,” Wu said.

Anne McLeer, director of higher education and research for Service Employees International Union (SEIU) Local 500, does not believe that having a full-time job is a valid reason for paying adjunct faculty lower wages. SEIU Local 500 is an education and public service union and has unionized adjunct faculty at nearby universities, including George Washington University and Georgetown University.

“I just don’t think that the fact that you have a job somewhere else is an argument for being exploited in your other job,” McLeer said. “It’s kind of like saying to a women in the 1970s, ‘I can pay you half what I’m paying a man for the same work because your husband has a good job.’ The argument for equal pay for equal work applies here. … If you’re an employer, you’re supposed to pay your employees equitably for the same job.”

A year ago, the Mason Coalition of Academic Labor (MCAL) and SEIU Local 500 created a petition addressing issues affecting adjunct faculty members. This petition was created after three sociology students conducted an IRB survey examining contingent faculty conditions at Mason and asked for four primary issues to be addressed: adequate time for adjunct faculty to prepare for courses, access to a private space for student meetings as guaranteed by the Family Educational Rights and Privacy Act (FERPA), a fee for course preparation and reimbursement for money spent on course materials and trainings attended and a 20 percent cancellation fee for courses cancelled less than three weeks prior to the beginning of the semester.

“We are focusing on the issues the task force has put forward, which are not exactly in alignment with what was in the petition,” Wu said. He said the task force’s priorities are more representative of the entire adjunct population at Mason.

According to task force member Kimberly Eby, who is both an associate provost for Faculty Development and the director of the Center for Teaching and Faculty Excellence, the task force has already made some improvements for adjuncts.

Prior to the task force’s formation, orientation for new adjunct professors was limited to a morning session mainly centered on filling out paperwork and other human resources-related tasks. As a result of funding from administration, orientation has been expanded to an optional afternoon session filled with a variety of workshops, according to Eby. The workshops cover a range of topics from informing faculty about services that Mason offers to students, such as psychological services and disability services, to classroom management and assignment development.

“Adjunct faculty really felt like they wanted more hands-on experience with Blackboard and some of the digital tools … [so there were] representatives from Blackboard present,” Eby said.

She said a popular session focused on engaging students in discussion both in the classroom and online.

According to Wu, parking permit fees was another primary concern among adjuncts. Soon after the creation of the task force, a reduced parking fee for adjuncts was implemented, although it was not an issue the task force took action to change.

The team is also working on creating a website for adjunct faculty members, which is expected to be up by the end of the semester, according to Eby. In the meantime, the task force established an email account where adjuncts can send their concerns.

David Zeglen, a member of MCAL and graduate teaching assistant in the cultural studies department, said that only minor changes have been made so far. He noted that some departments are working to provide orientations for new adjuncts, but most of the changes that have been made are not significant.

“I still think that we need much more strategic gains for how faculty are treated,” Zeglen said. “The pay is the biggest issue, quite honestly.”

The survey noted that data suggests half of contingent faculty at Mason live in households that are well-off, but the other half “must endure financial hardship” and “must keep their contingent faculty position in order to avoid enduring financial hardship.” The majority of faculty in that category are making less than minimum wage without benefits.

Although MCAL has been advocating for contingent faculty for some time and is responsible for the petition that resulted in the development of the task force, their input on the issue has not been sought by task force members. Contingent faculty include non-tenure track faculty, including adjuncts, lecturers, term faculty, part-timers, post-docs and teaching assistants, according to the IRB study.

“[The task force has] never reached out to us or contacted us,” Zeglen said. “They should be including us in any kind of discussions that they’re having, in even basic stuff like employee handbooks. … They’re making assumptions.”

According to Zeglen, the administration should focus on making structural changes, especially regarding pay, and lobbying state officials for an increase in funds.

MCAL has begun lobbying congressional officials and Zeglen explained that most are unaware of the conditions plaguing contingent faculty.

McLeer said adjuncts across the country are beginning to stand up to this perceived injustice.

“There is clearly a grassroots movement of adjuncts who no longer believe in the [education] system,” McLeer said.

She believes adjuncts are beginning to realize their inability to acquire tenure track positions is not an issue of qualifications but a symptom of a corrupt system.

Adjuncts are realizing they need to change the system by forming unions and “fighting against the corporate model of education,” McLeer said.