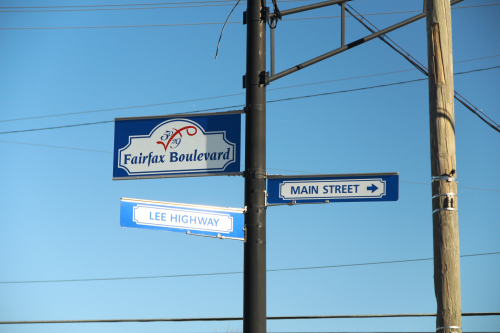 The intersection of Fairfax Boulevard, Lee Highway and Main Street (alternatively known as Routes 236, 29 and 50) is undergoing major construction. Mason students might know this area — called Kamp Washington — as the X-shaped intersection just north of campus that slices between Washington Sports Club, Zoe’s Kitchen and a T-Mobile store.

The project, estimated to cost $11.5 million, is designed to alleviate traffic congestion by increasing vehicle capacity with new lanes, lights and medians. The total project budget includes construction, design and utilities. The cost of the improvements will be split between federal, state and regional funds, including $50,000 from the City of Fairfax.

This project has been in the works for several years and began on Jan. 11 when crews started installing erosion and sediment control devices along with construction signage. While construction measures are not currently affecting traffic, and the overall impact of the construction period is supposed to be minimal, the coming months will see many more workers on the roads. This has the potential to irritate drivers in the short term, but promises long-term satisfaction, according to the Kamp Washington project website.

Since the intersection is located just a few miles from Mason’s campus, its problems may be painfully familiar to commuters and residents alike.

“There hasn’t been a time I’ve ever driven on that road where it wasn’t super condensed,” said junior Nour Nadri.

Nadri previously worked at the Guitar Center in the Kamp Washington plaza where she came to loathe the intersection’s crisscrossed layout. “It could be like a minute drive, but it will turn into five minutes,” Nadri said. “So I don’t normally like to go down that road.”

Since she no longer works there, she said she avoids the intersection at all costs.

Among the major problems in the current intersection is the lack of driving and turning lanes. The city has addressed this by adding a dual left turn lane from Fairfax Boulevard to Northbound Fairfax Boulevard/Lee Highway. On the project’s website, the City of Fairfax highlighted the need to adjust and eliminate “substandard horizontal geometry” along the main intersection and update not only the infrastructure, but also signal patterns and turn lanes to manage traffic in the existing space more efficiently.

The two-phase project will include a mix of large- and small-scale changes. Phase One began last month and is planned to wrap up in Jan. 2017. This phase includes the installation of roughly 2,500 linear feet of pipe, divided up to address the water main, drainage structures and sewage. Phase One also tackles the construction of new sidewalks and parking entrances as well as the construction of new traffic signal arms. 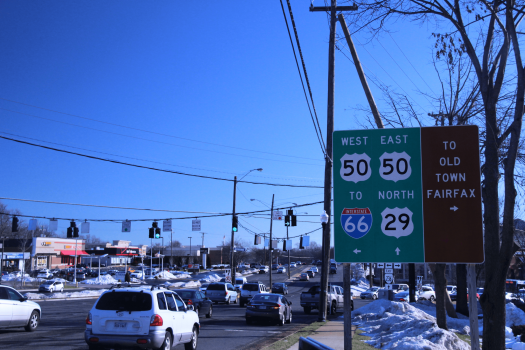 Phase Two will stretch from Dec. 2016 into April 2017 and includes the construction of medians as well as the finishing touches on surrounding sidewalks, new traffic signals and the final road paving. Additional updates include a new southbound lane on Route 29, from the intersection to the Shell station, extension of through-lanes on Main Street and extended turn lanes.

“After numerous public meetings and discussions, the project has been well received by the local residents and businesses,” said Christina Alexander, stormwater resource engineer for the City of Fairfax, via email. Alexander said the improvements will benefit the local drivers and commuters who drive to and through Kamp Washington.

In addition to smoothing out traffic, the project aims to increase the flow of pedestrians in and around area businesses like Aldi, Epicure Cafe, Chipotle and a string of auto dealerships. This strategy includes new crosswalks, sidewalks and curb ramps to enhance the walkability of the area. The city has also taken into account the messy visual traffic and will replace the tangle of span-wire signals that guide traffic with clear, overhead mast arm signals.

During the construction, all businesses will maintain access, though property entrances will at times be closed off — only one at any time — as part of the project.

However, this doesn’t mean the project will not cause some problems for drivers.

“As with any construction project on an urban environment, there will be times of construction delays,” Alexander said.

She said significant portions of construction will take place at night in order to accommodate daytime travelers and businesses. However, Alexander pointed out that most night work will likely be excessively noisy. The city will also keep daytime work restricted to non-peak travel times in order to avoid compounding traffic during rush hour.

“These strategies will be closely watched and adjusted as necessary to further minimize any disruptive activities as the project progresses,” Alexander said.

A public hearing was held on Jan. 6 to deliver the final plans to local residents. While there are no more public information meetings scheduled now that the project is underway, those interested can visit the official project website (www.kampwashingtonimprovements.com) for a project presentation, detailed changes and weekly updates on construction progress, as well as announcements regarding planned closures. Residents may also submit comments and concerns.