In its only exhibition game before the start of the season, Mason’s women’s basketball team defeated 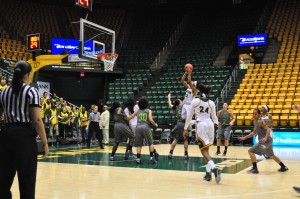 The game got off to a generally shaky start for both teams. Mason shot nine for 39 from the field, while the Central Methodist shot ten for 34 from the field and only shot six for 22 from beyond the arch.

The Patriots could not knock down a 3-point shot during the first half, as they went zero for six from beyond the arch. But they crashed the boards successfully, leading in the rebound category 34—21. Tiffany Padgett snagged seven rebounds in the first half.

Eagles guard Taylor McDowell drained a key open 3-point shot to end the first quarter. But turnovers were a problem for Central Methodist with 10 recorded before halftime. 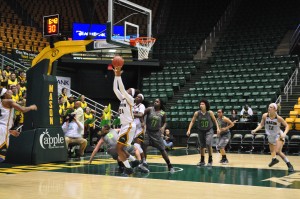 The Patriots started the second half of the game with more energy and aggression. Players began scoring with ease as soon as they left the locker room and shot 50 percent in the second half. This required a lot of work from Brown, who drove the baseline for a reverse layup over two defenders in the fourth quarter, ending the game with a total of 17 points.

As for the Eagles, points were hard to come by in the second half due to missed shots and personal fouls. The Eagles did get some production out of Campanero, however. She continued to distribute assists, but that was not enough to help her team secure a victory. The team could not capitalize on open shots and take care of the ball. The Eagles shot 17 for 70 from the field and had 17 turnovers in total by the end of the game.

But the win for Mason was an overall team effort.

“As a team, we just settled down, and we just focused on what we do best. So, I think that helped when we just calmed down and played our game,” Brown said. She added that encouragement to “play hard” from Head Coach Nyla Milleson helped her performance.

Wright played with a lot of aggression on the court in the second half and attributes her focus on rebounds during the game to Milleson’s emphasis on both rebounding and scoring.

Milleson agreed that the team started out the game feeling nervous but was able to settle down a little more in the second half. But she said that she is seeing great improvement from the defensive and offensive ends of the floor. 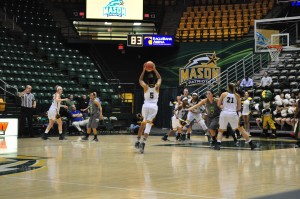 “Overall, as a unit, I thought our defense was better. I thought we did a really good job running the floor on offensive end. We’ve got good pieces. This was a good test for us, and it’s really going to help us going into practice tomorrow,” Milleson said.

Mason’s women’s basketball team will kick off its season Nov. 13 in a game against Radford University. The game will take place at the Donald N. Dedmon Center in Radford, Va. Tipoff is at 7 .p.m.

The Secret Life of a GMU Squirrel