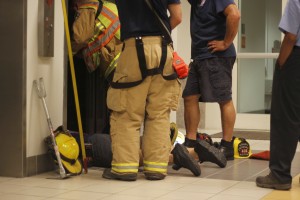 On Sept. 9, firefighters rescued Mason alum Marcela Serpa and a friend from a stalled elevator in the Johnson Center. Serpa and her friend were stuck between floors and were trapped for one hour before they were safely released. (Amy Rose/Fourth Estate)

After a year of elevator entrapments in the Johnson Center, followed by $1.1 million in renovations, Facilities Management has finally found a workable solution.

The University Police Department says there have been 142 elevator service calls across Mason campuses in the past year. Of these calls, 77 resulted in confirmed elevator entrapments where an individual was stuck inside and needed assistance to be released from the car.

Mason alumna Marcela Serpa and a friend were trapped in a Johnson Center elevator at the beginning of September 2015, the peak time for elevator entrapments before the problem was discovered.

“We were trapped for an hour between two floors,” Serpa said. “They [emergency responders] were having trouble opening the doors. I’m not trusting the elevator anymore.”

According to Quality Elevator Company, with whom Mason has a maintenance service contract, 15 to 20 years is the average service life span for an elevator. The Johnson Center elevators were originally renovated in Fall of 2014 because they were approaching the end of this life span. However, the repairs were not a direct result of the aforementioned increase in elevator entrapments. 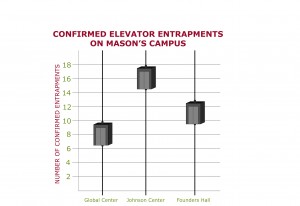 Police Department reports show 16 entrapments have occurred since these renovations took place. The original repairs included installing the new Bucher Hydraulics valve system, which would save 30 percent more energy than the old system.

Project Manager Mike Herman explained an elevator pipe valve is the fail-safe mechanism that stops the car from falling during a mechanical failure. He then described the mechanical problem in the new valve system, which was causing the continued entrapments.

“The valve is sensitive to flow rate,” Herman said. “It would engage due to an abnormal surge of hydraulic flow causing the car to stop. This surge would not show up in error code, so it took a while to pinpoint the problem.”

The valve was replaced in mid-September and there have not been any further entrapments in the Johnson Center since the replacement.

These buildings are ranked from the greatest to the smallest number of elevators per building. The service calls are grouped by building, not by individual elevator cars. Calhoun explained that we can expect to see more calls from buildings higher on the list because these buildings have multiple elevators.

The calls “range from low 20’s to 38 (service calls) for the year,” said Calhoun by email. “Two to three calls per month are not out of the ordinary. It appears to me from this that the JC was the one building with serious systematic issues.” 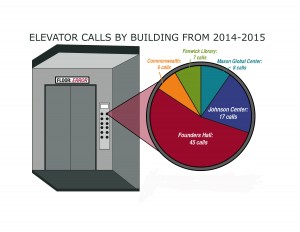 This chart refers to the number of calls received by the Mason police department related to elevator entrapments. All calls were found to be confirmed entrapments, accidental calls or an unknown situation, which usually meant no one was found in the elevator when responders arrived. (Megan Zendek/Fourth Estate)

Founders Hall, located on the Arlington campus, saw the second-highest number of confirmed elevator entrapments in the last year. “People would push the buttons and nothing would happen,” Calhoun said. “We did a major control wiring upgrade. We think the problem with Founders has been fixed.”

Local firefighters are often called in to assist in releasing those who are trapped. Master Fire Medic Ryan Hilt of Station 33 gave advice for anyone who becomes trapped in an elevator in the future.

Hilt explained that elevators are machines, so they malfunction from time to time. Usually the problem is with power or the motor, so it is not normally a safety issue.

When these problems occur, the fail safe mechanism mentioned above secures the car to keep it from moving or falling. Firefighters also secure the power to hold the car in one spot when they are helping entrapped individuals exit.

Hilt wants those who are trapped to remember there are a lot of people working to get them out and says that “being anxious turns inconvenience into emergency. So try not to panic.”

According to Quality Elevator Company, elevator inspections are required by code and should be conducted annually. Mason facilities divide elevator inspections in half, examining some during summer break and the rest during winter break each year. The inspection certificates for each elevator can be found up to date in the Facilities Infrastructure and Records building.

Facilities is working on elevator renovation plans for Planetary Hall coming this year and is beginning to schedule plans for Mason Hall.