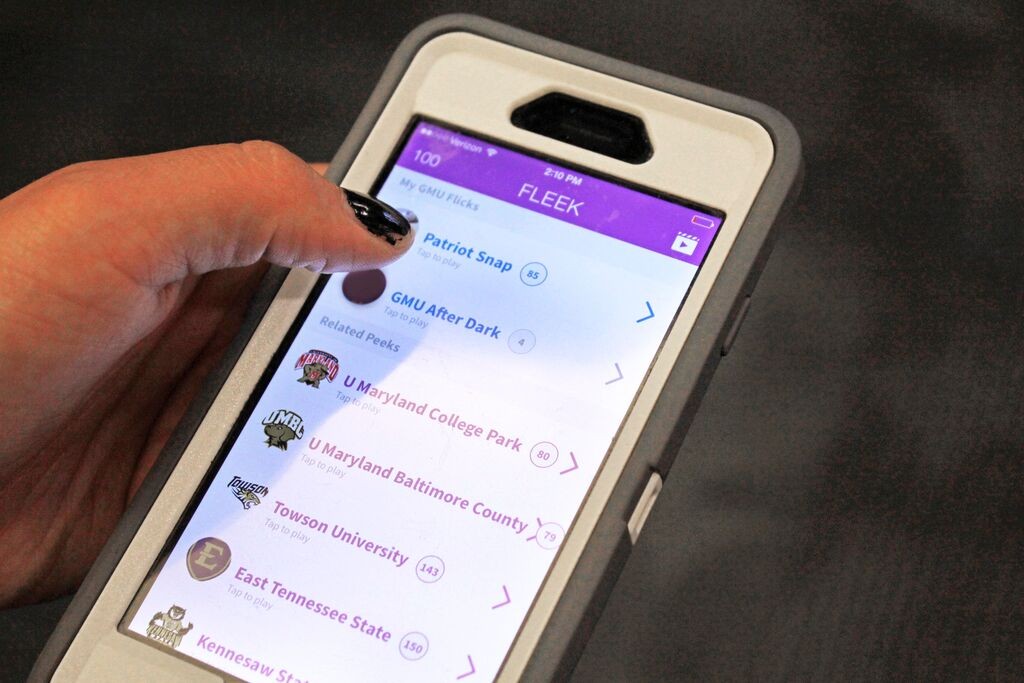 Students are constantly on their phones. It is not unusual to see a cellphone sitting beside a student’s notebook in class as an essential item used throughout the day.

Along with smart phones come their apps.  There are apps for everything, but commonly used apps around Mason’s campus — or any college campus — are social or anonymous-based apps like Yik Yak and Snapchat.  A new app called Fleek College Stories is rising in popularity at Mason.  It is a mixture of Snapchat and Yik Yak all in one.  Students can upload photos with a caption and viewers can up-vote or down-vote it.  One of the first sentences on the app’s description page is “Your unofficial campus story that won’t get banned by Snapchat.”

Students are not the only ones affected by this app — Parents are starting to take notice as well.  Fourth Estate received an email from a concerned parent about their daughter using the app.  This is not the first parent to reach out to schools about Fleek College Stories.

“I visited my daughter at school and as usual, she was on her phone the whole time,” the concerned parent said in an email. “My daughter showed me [Fleek College Stories] and I’m really disturbed.  She’s trying to convince me that the app is all in good fun, but if you look at it for two seconds, you’ll see the problem with the content.”  The parent explained that all that was seen on the app was nothing but a three minute story of “inappropriate pictures and videos,” including marijuana, Adderall, binge drinking and nudity.  There is even a whole feed dedicated to “x-rated” photos.

“I think this promotes cyberbullying and illicit activity on the GMU campus,” the parent said. “I believe the app really warrants a story, and hopefully some attention from the administration, because frankly I do not want to see my daughter or other students on here.”  The parent’s email also included a screen shot from the app of a female student standing up in class seemingly unaware that she was being photographed with a caption that read, “look at that a**.”

Some students love this no filter, freedom of speech app, but does it have the right idea?

One of the reviews on the app’s Apple page by joshbewizzel reads, “I don’t even know where to begin by thanking you! Giving the people what they want, without controlling or filtering our right to freedom of speech.  Yeah, we get it the new generation express themselves in a different way.  Thank you for giving back us, that [sic] was taken away! #WeThePeople”

Yik Yak also has this anonymity although it is more rare to see a negative comment made about a specific person.  “Encouraging a positive, constructive, and supportive community environment on Yik Yak is a top area of focus for us,” Olivia Boger, communications associate for Yik Yak, said in an email interview.

Yik Yak has a filter to make sure anything explicit is not said on the feeds.  “On our end, we’ve put a number of safeguards in place and we’re constantly working to enhance these measures,” Boger said.  She even commented on one of Mason’s biggest trending topics on the Yak page: the Crane. Posts like this, which Boger describes as “particularly funny,” show how these anonymous apps can be positive.

“The anonymity of the app allows for a lot more honesty,” Alli Evans, a junior majoring in Community Health at Mason, said.  “People are more comfortable when their name isn’t attached.  It’s good and bad, but it definitely has its upside.”

Evans never heard of Fleek College Stories before, but she does follow Mason’s unofficial Snapchat called Patriot Snap and is an avid Yik Yak user.  Patriot Snap’s name changes often because it gets deleted for some of the material shown in the stories.  “It can be funny, it can also be inappropriate. The explicit posts are not super common though,” Evans said.

Students like Evans enjoy the anonymity of these social apps.  Sophomore Spanish major, Welsey Brown said, “I like the apps like Yik Yak because they are anonymous and I can post pretty much anything without anyone knowing who is posting. I also believe there is some honesty that can be found on these apps, like the fact that they are unknown can give others some strength once the fear of judgement is lessened.”

Brown has heard of Fleek College Stories, but is unable to use it because he does not own Apple products.  He does, however, follow Patriot Snap and sees how the negative aspects of the social apps can come into play. “I think that it is possible for this to happen, however, I have not seen too much of this in terms of targeting people specifically,” he said. “I have seen explicit content on both, however very few times have I seen something directed at another person, or have seen someone called out by name.  I think they have the potential to turn into a method of bullying, but as long as college students use them semi- responsibly, this should not happen.”

A new app that has app users nervous is called Peeple, which is estimated to come out in late November. It gives users the ability to rate people similarly to how people can rate restaurants on Yelp. The Washington Post describes it as “basically Yelp, but for humans.”  Users will be able to assign a star rating of one to five to everyone they know from co-workers to exes.

“People do so much research when they buy a car or make those kinds of decisions,” Julia Cordray, one of the app’s founders, said to Washington Post.  “Why not do the same kind of research on other aspects of your life?”

Some may question that apps like these are changing what people think is socially acceptable.

“[They] allow for people to be anonymous, which can be great,” Evans said.  “But when you’re mocking a girl for what she’s wearing on Snapchat or for what someone does on Yik Yak, it’s not okay.  Then you’re using anonymity more as a shield than a safety net, and purposely tearing down other people.  It’s cowardice.”