After seniors graduate, they are usually frantically applying to every job in the area and hoping for the best.  Former Online News Editor for Fourth Estate and recent Mason graduate, Avery Powell, had a stress-free post-college job search. He accepted his dream job in April before graduating in May 2015 with a degree in global affairs and a minor in journalism.

Powell is currently a reporter for WHSV- TV3 located in Harrisonburg, Va. 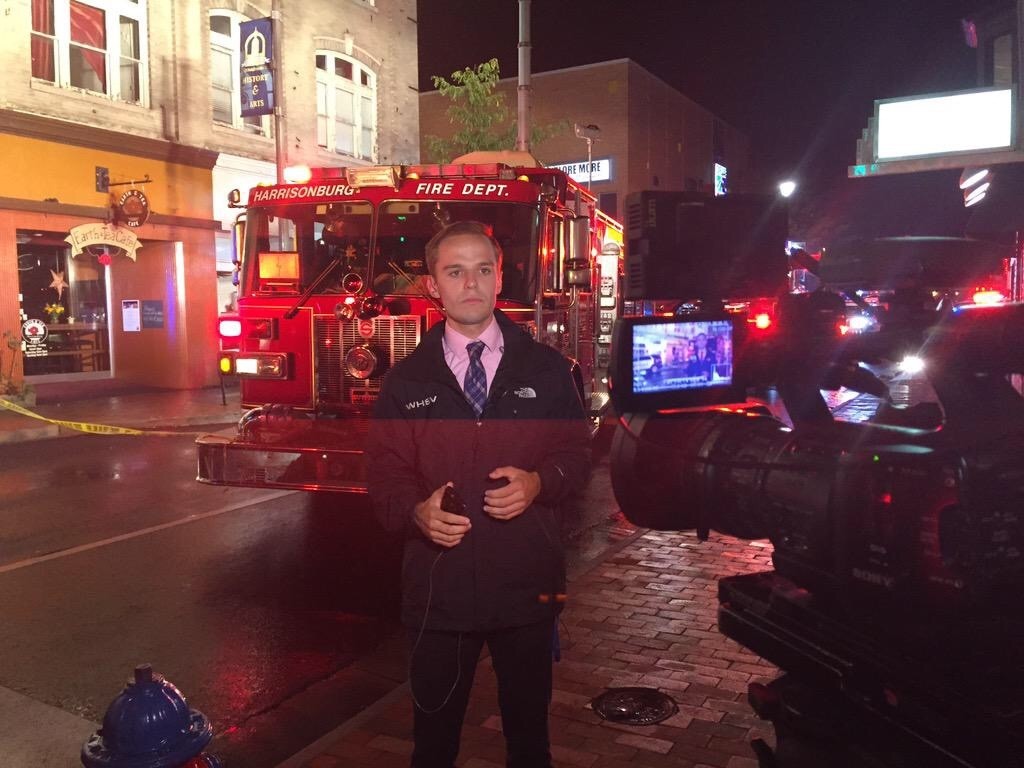 He already knew he had a job locked in while he was walking across the stage at the Patriot Center. “It was a relief,” Powell said. “Especially [a job] in journalism because it’s competitive.” He started as a web producer for the station and quickly became a reporter.

“I used this website called tvjobs.com,” said Powell. “You have to pay a yearly fee, but it lists every TV job that is available in the United States. I just kind of went through it and looked for openings.” That’s where he stumbled across WHSV, the sister station of Charlottesville Newsplex, the news station where Powell interned while at Mason. “That helped me get ahead, I think,” he said. His references from Charlottesville Newsplex was an extra plus.

Powell held several media internships throughout his college experience, including a position at NBC’s “Meet the Press,” NBC News’s political unit, and one as a college correspondent for USA TODAY College. “I think my internships helped me stand out throughout college and my work with Fourth Estate. I think it was a mix of a lot of things … and dumb luck.”

He talked about his typical day as a reporter. “We start our day at 9:30 a.m. with our morning meetings with the news director, assignment manager, the producers and the reporters,” Powell said. This is when staff members review the day’s story ideas, weather and news for the day. Each reporter has to pitch two viable stories during this morning meeting, Powell explained. They discuss story ideas and then figure out who is going to cover what for the day. Then each reporter goes out on the scene to shoot his or her story and get interviews.

“I work the day shift so I produce my content for the 5 p.m. and the 6 p.m. shows,” said Powell. “You get all of your content done and then you come back, write your script, edit and get it ready for the 5 p.m. show.”  He tries to get back to the station at 2 p.m. with all of his footage and interviews to give himself time to write his script.

Reporters at WHSV are multimedia journalists, which means they do everything themselves. This includes being in front of the camera, interviewing, setting up cameras and editing. “You pitch, write, film, you do everything. I am a reporter first and a photographer second,” Powell said.

“Fourth Estate definitely helped me. To be an editor helped more then being a writer because I had to come up with story ideas and that is one of the hardest parts of my job, pitching story ideas,” said Powell.

Each reporter has specific counties in which they report. Powell is currently covering Rockingham County, Va. and the city of Harrisonburg.

He has covered some fun stories so far in his reporting career. He recently shot a stand up, which is a short shot of a reporter in front of the camera narrating the next part of their story, inside of Luray Caverns.

“I did a more fluffy story about this dog that got lost,” said Powell. “It was found by the sheriff’s deputy. He found him on the side of the road while he was on the phone with his friend. She was on Facebook and was talking about the dog that was missing.” This dog turned out to be the dog that was right in front of the deputy, explained Powell, who enjoyed interviewing the owners to support this entertaining news story.

“I got to interview the first lady of Virginia while she was touring Shenandoah Valley. That was pretty cool,” said Powell. He has also had to report more moving stories that have pulled at his and viewers’ heartstrings. He recently covered a story about a couple who stayed together through the husband’s battle with cancer.

Powell said his favorite story so far had to be covering a new brewery that opened in Woodstock, Va. “I went in and got to ride a conveyer belt where they take the grain out. I got to mix some stuff, I was able to get active in the process,” he said. A story gets more exciting to shoot when the reporter can get involved with the news, making it more amusing and eye-catching for the viewers.

“I was asked to cover a story about apartment complex in West Virginia that was being sued by the West Virginia attorney general for allegedly charging excessive fees,” he said about one of his more challenging days at the station. “It was very difficult to find someone to talk to about that.” Powell said he would reach out to the apartment complex and they wouldn’t get back to him. “It was just a lot to try and figure out. It was a tough story to turn around in one day,” he said. When it comes to sources not getting back to you, Powell says you just have to keep moving.

Powell has also covered stories that were very emotionally difficult. “You just have to have empathy and also realize that you are trying to tell their story, and make sure you are telling it fairly so that it comes out well.”

Powell reflected on which classes at Mason helped him prepare most for his current career. “I took a news writing class and that really helped my writing. Take as many writing classes as you can,” he said. “Video workshop class helped me too, so you know how to run the camera.”

Powell is still deciding if he wants to stick with reporting or move into anchoring. “I don’t want to pin it down to something because I’m still learning.” Although, he says that he does want to move up to bigger cities and knows that this is what he wants to do. “It’s more stressful then I ever thought it would be, but I’m enjoying it,” he said. “I was surprised about how quickly we had to turn a story out. I mean I knew that’s what they did but I mean turning a story out in a day is tough. I don’t think anything in college prepares you for that.”

Powell advises students to participate in internships throughout college because experience is the best tool to fully prepare someone in their career path. “It doesn’t matter if it’s a small news station or a large news station. If you want to become a reporter on camera, I know big internships like NBC news, I love them- but those small stations are going to prepare you. They are the ones who are going to put a camera in your hand and say ‘film this.’ That’s what you need.”

Powell also commented that wording on resumes are important. “[You are] trying to make yourself appeal, to show that you have skills from certain jobs,” Powell said. He had a mixture of regular jobs like working at Gap, which he balanced with his news internships. “I tried to cater everything to what I wanted to do,” he said.

“In journalism, I have said this all four years … if there is a student newspaper, you need to freaking write for it. My news director said to me ‘I’ve read your writing.’ Which is something that they want to look at,” Powell said. “If you are just submitting these class assignments, that’s not anything,” he explained, since this is just a piece that you are turning in for a grade, not something that is actually published. “It doesn’t have to be published to some big company website, it can be published on your school’s website,” he said.

Though it was difficult at times, the work Powell did to come this far was invaluable for him.

“College feels worth it that I did all this work and now I’m in the industry that I have been studying for,” said Powell.