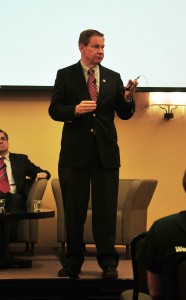 Davis opened the forum with an illustration of the Republican sweep across the nation in a host of races: Senate, House, gubernatorial, and state legislatures.

“The Republican party this year worked very hard to prevent extreme right candidates from running – that’s one reason for their success,” Frost said.

On the topic of the Virginia Senate race, the two former Congressmen agreed that Gillespie was able to run such a tight race by focusing on the more rural areas of Virginia and encouraging big turnout in those areas.

“Virginia for years had always been a strong Republican state. Only recently – with President Obama – has it become much more closely contested,” Frost said.

Davis then took a deeper look at the American electorate. He indicated that, especially in recent elections, society has become increasingly ideological and polarized in its voting patterns. The rector emphasized this change, explaining that people are no longer voting for a candidate, they’re voting along purely ideological party lines.

“Voters used to vote for the name on the back of the jersey,” Davis said. “Now they’re voting for the color of the jersey. You see that across the board.”

When asked why politics are so polarized today, Davis pointed to three reasons. First, the effects of partisan redistricting, or “gerrymandering,” in which politicians draw districts that  pack certain population demographics together to increase a candidates likelihood of being elected. 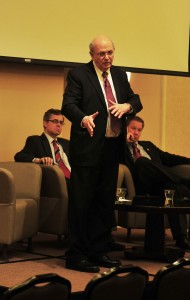 Former Democratic Congressman Martin Frost Photo Credit: Claire Cecil  The second contributor, Davis says, are media business models like MSNBC and Fox News that thrive on polarization, catering to a population that already thinks a certain way and simply tunes in to hear their views affirmed.

Lastly, the influence of money in politics plays a much bigger role than it used to, insisted Davis. He and Frost both agreed that the 2002 McCain-Feingold campaign finance legislation, which limited the amount of money that can go to political parties, has caused much bigger problems than it was originally crafted to solve.

“Instead of going to the parties, [the money] now is out there on the wings. Parties are a centering force in American politics, and if their influence is limited, it will benefit these ‘fringe’ groups,” Davis said.

Following Davis’s analysis, Frost directed the conversation towards the next two years, suggesting that there is a lot of work in store for both parties. According to Frost, the toughest issues Washington will face in the near future are tax and immigration reform. However, he believes that it is ultimately up to the president to meet Republicans halfway.

“[Incoming Senate Majority Leader] Mitch McConnell is a very, very capable and willing leader,” Frost said. “The question is, will President Obama be willing to meet Republicans in the middle?”

Theaters in the DC area