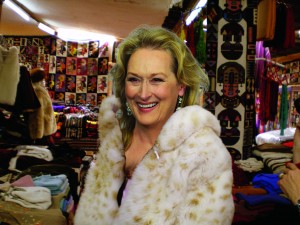 Although the Mason Players 2013-2014 season is nearly at its end, the organization best known for performing theatrical works at George Mason has surprised the public with one final, one-night-only main stage production.

This surprise performance comes with another twist: a guest star, Meryl Streep.

David Richardson, long time theater professor and director at Mason, said, “While our students are remarkable actors, we felt this would be a great opportunity for students to work with an actress that has been actively involved in the theater and film world.”

Meryl Streep has been renowned for her charm, on camera and off, as well as her incredible acting ability. By 2014, she earned 18 Oscar nominations—three of which were wins—and a plethora of other awards for her work including MTV Movie Award nomination for her performance in “The Devil Wears Prada.”

The piece chosen for this one-night-only performance is one beloved by many.

“John Steinbeck’s ‘Of Mice and Men’ has always struck a chord deep in my soul,” Richardson said. “We decided, however, to change the gender of the main characters so that they were both female, and ultimately change the title of the piece to be ‘Of Mice and Meryl.’”

Streep will be playing the role of Lennie, or Lenora for this particular show, which may be her most challenging role yet.

Alongside her is Mason student Samantha Taylor, junior Astronomy major.

Streep has apparently been struggling with this anamorphic ability through most of her adult life.

“That was how we met,” Richardson explained. “I used to be an alpaca farmer in Wisconsin. One day, I was shearing the alpacas for the upcoming spring and one of my best dams turned out to be Meryl Streep.” Richardson laughed and said, “We’ve been friends ever since.”

“Of Mice and Meryl” incorporates a large cast, and many students have been given the opportunity to act alongside the famous actress.

“Meryl makes the whole experience fun,” Taylor Collins, senior Film Studies major, said. “Sometimes, it is easy to forget that theater is about playing. Also, when she turns into an alpaca, sometimes she lets us ride on her back.”

As part of the fundraising for the Mason Players, the organization will be selling Ruanas, Sweaters and Ponchos made from Meryl’s alpaca hair.

Streep was not available for any further comments, as she was very busy chewing on the furniture of the Theater Lounge. But she seemed happy.

More information about the Mason Player’s upcoming production of “Of Mice and Meryl,” will be offered closer to the show’s opening.